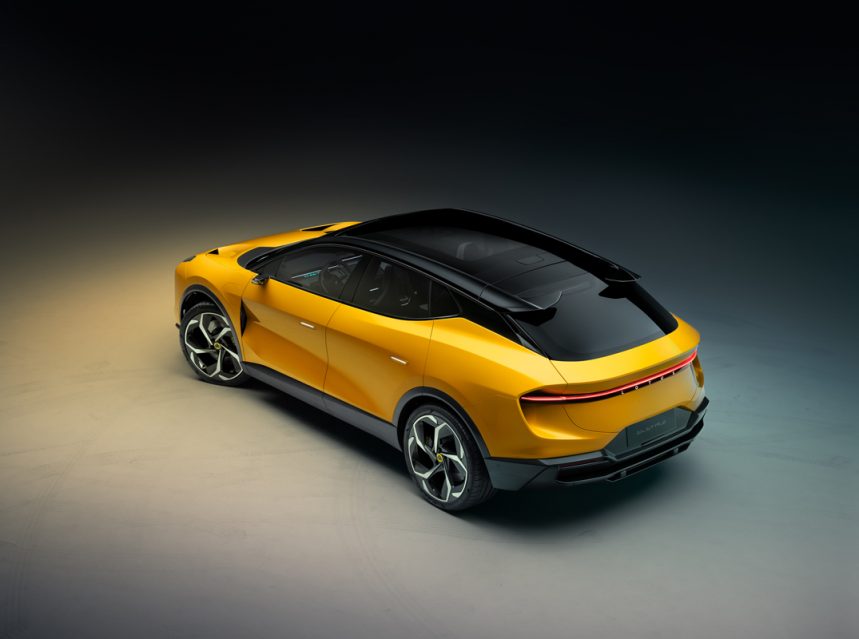 The striking new, all-electric Lotus Eletre is the first of a new breed of pure electric SUVs, according to Lotus – a car that evolves the core principles and the company’s DNA from more than 70 years of sports car design and engineering into a desirable new lifestyle car for the next generation.

Introduced as part of the brand’s ongoing transformation to a truly global performance car brand, Lotus claims the Eletre to be the first electric hyper-SUV in the world – a highly contentious statement considering the performance of the Tesla Model X Plaid SUV, now in its seventh year of production.

The latest Model X Plaid, now with updated battery architecture delivering over 100 kWh and total power of 760 kW, is widely recognised as the most powerful and quickest accelerating SUV globally. It can scoot from 0-100 km/h in 2.7 seconds, blitzes the quarter-mile in 9.9 seconds, and can reach a top speed of 262 km/h. In comparison, the Eletre has a claimed 445 kW of maximum power, a claimed 0-100 km/h sprint time of 3 seconds and a top speed of 260 km/h, making it difficult to see how Lotus can substantiate its claim – aside from not recognising the Tesla as a class contender.

Whatever the case, according to Lotus, the Eletre takes the heart and soul of the Emira and the aero performance of the electric Evija hypercar and reinterprets them as a hyper-SUV – thereby extending the reach of the Lotus name to a new audience.

Initially known as Type 132, the Eletre is also the latest in a long line of Lotus cars with a name beginning with the letter E. Meaning “Coming to Life” in some Eastern European languages, the Eletre can still claim a clutch of firsts: It is the first five-door production car from Lotus, the largest (at over 5 m in length), its first model outside the sports car segment, the brand’s first lifestyle EV and the most ‘connected’ Lotus ever.

The Eletre is built on a new 800V dedicated Electric Premium Architecture (EPA) with an integrated, high-voltage power distribution system. Aluminium and high tensile steel are used for optimum structural rigidity and, combined with the flat “skateboard-style” battery pack underneath the floor, creates a low centre of gravity.

The 4WD Eletre has a battery capacity of over 100 kWh, delivering a maximum WLTP driving range of 600 km. The 350 kW charger will deliver a 400 km range in just 20 minutes, and the Eletre can also accept a standard wall-mounted 22 kW AC home charger.

The Eletre boasts the most advanced active aerodynamics package on any production SUV, as well as intelligent driving technologies such as the world’s first deployable Light Detection and Ranging (LIDAR) system in a production car.

An international team led the design of the car under Ben Payne based at the Lotus Tech Creative Centre (LTCC) in Warwickshire, United Kingdom, supported by collaborative work with teams in China, Sweden, and Germany. This resulted in a vehicle with a unique look and position for Lotus in the SUV segment.

Overall, the visual lightness of the vehicle creates the impression of a high-riding sports car rather than an SUV, and the “carved by air” design ethos of the Evija and Emira is obvious. A signature design element is its “porosity” – the aerodynamic principle of air flowing through the car as well as under, over, and around it.

Premium and highly durable synthetic microfibers are used on the primary touchpoints in the interior, and an advanced wool-blend fabric on the seats is 50% lighter than traditional leather. The layering of materials and textures creates a premium feel, augmented by a triangular theme replicated in multiple locations around the cabin.

The Eletre is now available to order, with the first deliveries starting in 2023. It is the first in a new range of premium lifestyle performance electric vehicles from Lotus to be built at a state-of-the-art production facility in Wuhan, China. And will hopefully catapult the marque into a new era of higher retail volumes and significant revenues.