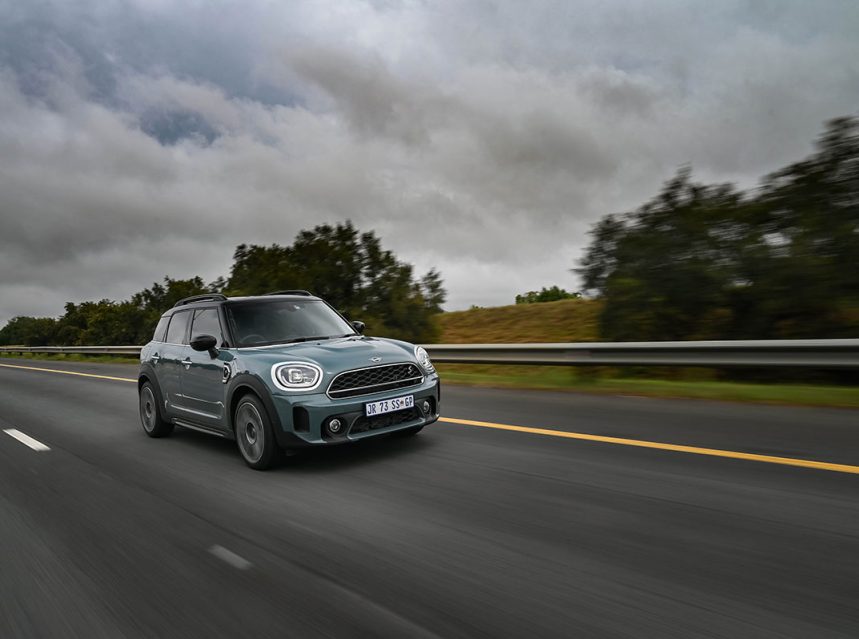 MINI’s steady march from iconic microcar to, what is today, an extensive range, has been ongoing for the last two decades. The newest version of the MINI mid-size SUV, the Countryman, takes the icon to a whole new – and significantly larger – level.

My initial encounter with the first MINI Countryman a decade ago left me a little perplexed. Like so many who have admired the original Mini and truly enjoyed the return of New MINI, the large barge seemed odd – I honestly couldn’t wrap my head around it. But that was then.

Today, in the context of the explosion of the various SUV segments, it would be odd for MINI not to have a contender in the mid-size premium market. The recently updated second-generation car is a significantly more sophisticated version of its original self.

SHE’S GOT THE LOOK

Few mid-size SUVs can claim the illustrious lineage that the Countryman can, leaving many of the MINI’s contenders having to break new ground on the design front. Some, admittedly, more successfully than others. The Countryman, however, has more than half a century’s worth of heritage to draw from. While it may not be everyone’s cup of tea, I appreciate uniqueness in car design (perhaps more than most) and can look past the rounded shape of the Countryman to see its soul shine through.

Recent (in 2020) updates to the Countryman’s exterior include subtle cosmetic changes to the car’s front and rear. There’s a new-look front with redesigned headlights and grille, while the rear now boasts stunning Union Jack-inspired taillights and an upgraded bumper design. MINI has also extended the use of LED headlights and fog lights across the range, while new exterior colours and alloy wheel options round off the changes.

MINI has upgraded the digital instrument cluster to a new, more compact unit inside the cabin. A smaller sports steering wheel is now standard across the range, and the MINI Connect infotainment system gains new functionality and connectivity. One of my favourite functions, and a BMW Group first, is the ability to use Apple CarPlay wirelessly.

Interior comfort levels are high – as one would expect from a premium vehicle in the Countryman’s price bracket – and the car comfortably sits five. There is also ample room for luggage (up to 1,390 litres), underscoring its ‘real’ SUV usability.

With the introduction of the second-gen Countryman back in 2017, MINI also introduced its new range of modular engines, carried over from the BMW 1-Series.

Driven sampled the Cooper S derivative on our three-day-long test drive. With 141 kW and 280 Nm on tap from the Countryman’s 2.0-litre four-cylinder engine, the maxi MINI has enough grunt across its rev range not to leave you wanting more in everyday driving circumstances. The car’s 7.5-second zero to 100 km/h sprint time is not to be sniffed at either and shows off the better side of the car’s seven-speed dual-clutch automatic with great aplomb.

Allow me to dwell on the transmission for a moment. As one of the smoothest, yet quickest-shifting dual-clutch ‘boxes out there, it is undoubtedly the centre point of the Countryman’s dynamic appeal. Compared to similar offerings from competitor brands, the MINI’s transmission has been programmed with slightly longer ratios to make full use of the engine’s available power. MINI enhances the drive experience somewhat by pumping simulated engine sounds into the cabin via the sound system.

Even the staunchest of MINI detractors (and there can’t be too many) will agree that new-gen MINIs have retained the original Mini’s astounding road-holding abilities. Part of MINI’s formula to maintain this characteristic is the traditionally firmer suspension set-up on all MINIs, including the Countryman. I prefer a smooth ride to a firm one, but I suspect that most MINI buyers would choose the opposite to avoid losing the car’s legendary ability to successfully tackle corners at high speeds – especially when drive mode has been set to SPORT.

With a flick of the toggle, you can also enjoy different handling and responsiveness to match your mood. SPORT boosts steering and throttle response for a more dynamic experience. The GREEN mode helps you achieve maximum fuel efficiency with leisurely cruising, and MID gives you a happy driving medium.

The motoring landscape has changed so significantly in the last decade that kudos must go to MINI’s foresight in bringing the original Countryman to market when they did. Offering the ideal vehicle for MINI fans to upsize into as their families’ needs grow – and the Countryman’s sales stats over the last decade proves this point well – the Countryman has become an essential product in the brand’s global model line-up. Its recent update adds loads of presence to the exterior, and the comfortable and tech-savvy interior is a great place to spend a few hundred kilometres at a time.