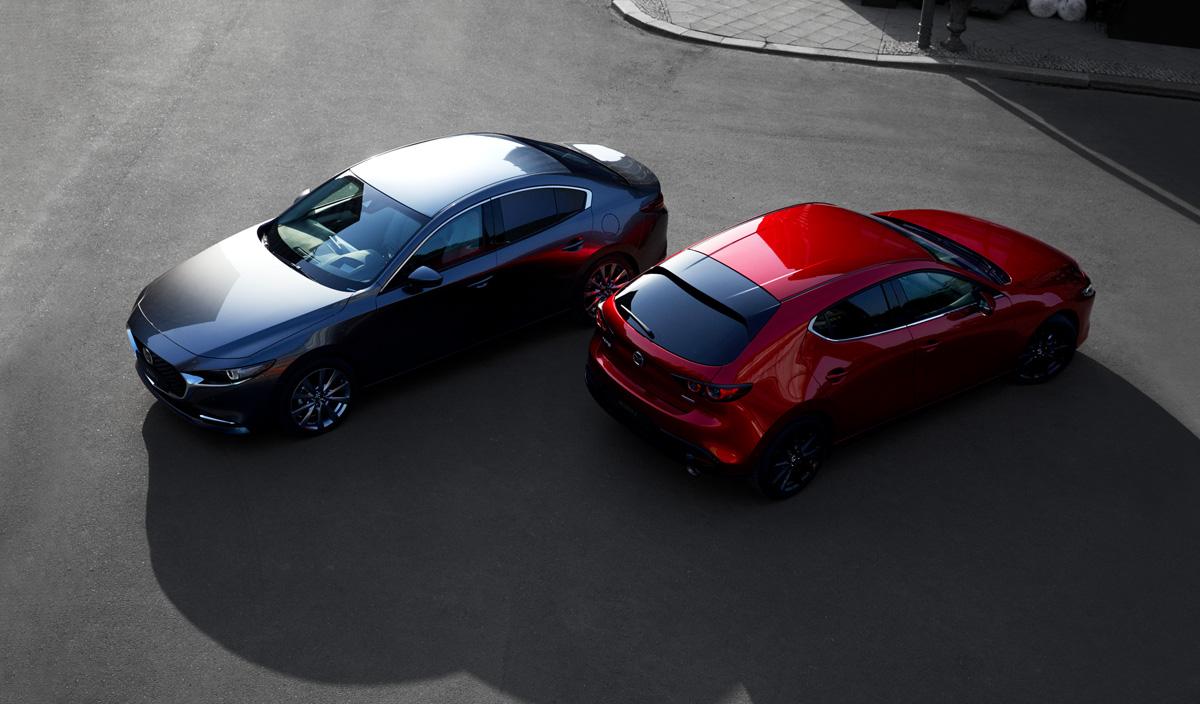 Mazda’s medium hatch/sedan proposition is at the core of the brand’s DNA outside, of course, the indomitable MX-5 roadster, continuing to be the curator of the marque’s design and technology repertoire. Since the transition in 2003 from the triple-digit 323 suffix to the now universal single 3 numeric, the model has occupied quite a niche spot in its respective segment, unreservedly appealing to the fairer sex of the market who pander to style, safety and convenience in their vehicle choice – criterions on which the Mazda 3 has managed to deliver handsomely. Lerato Matebese recently attended the South African launch of the seventh generation of the model and gleaned some rather moot points.

Since its acrimonious severance from its former parent company, Ford, Mazda has had to reposition itself as a standalone brand with standalone dealerships, baring its own corporate identity. While that takes some doing, and requires extensive investment, the company’s overall excellent products mean that half the battle, at least on the dealers and the manufacturer’s part, is already dispensed with.

Furthermore, having a desirable product portfolio catalogue, which Mazda has in spades, means that dealership traffic remains on the cards, but a palatable price is also key, particularly in these rather austere economic and trading conditions. The premium and luxury segments of the market, as a result, continue to be under pressure as the buying-down trend continues in earnest. However, while buyers are keen on forgoing the brand prestige aspect of their premium vehicles, that is not necessarily the case with safety, convenience and quality aspects. Thus, non-premium and sub-premium products continue to gain unprecedented popularity on the market. 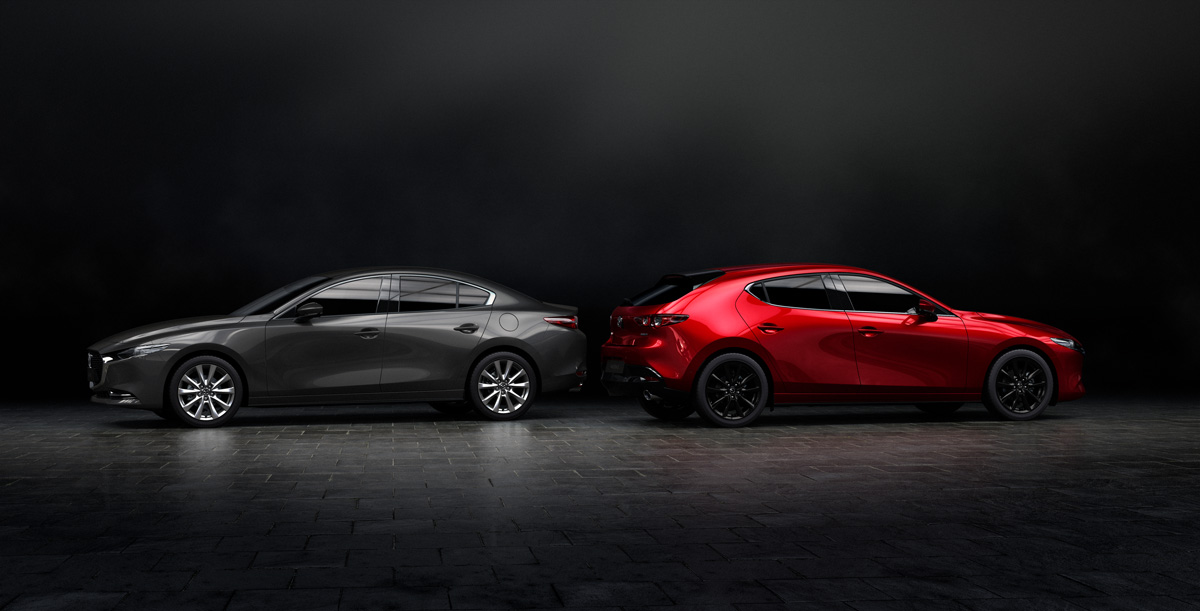 According to Mazda SA’s managing director, Craig Roberts, Mazda is steadily moving into a segment it dubs “Mazda Premium” that is, to be a frank, a sub-premium segment, which is currently occupied by the likes of Volkswagen, Hyundai and Kia. The latest Mazda 3 continues this very trajectory, something that was already evident in the brand’s current crop of models, although the latest 3 has truly elevated this perception a few notches.

This can be seen from its design, which is considerably sharper than the outgoing model and accentuated by the large corporate grille and slim headlights. Both the hatch and sedan – available from launch – boast a similar visage, but things do change somewhat from the B-pillar rearwards, where the truncated hatch looks more interesting than its three-box sibling. Depending on the specification chosen, you can opt for a fully blacked-out front-end, where the silver accents make way for a piano black finish. Even the wheels can be decked out in a black hue, which on lighter body-coloured cars make for quite an intriguing contrast.

The Japanese marque has been moving considerably upstream in its cabin architecture as evidenced in the previous Mazda 3, but the wick has been turned up further in the latest model. There are soft-touch padding cowls atop the dash, equally pliable materials on the doors, while contrasting double stitching runs the length of the dashboard to give a classy look and feel. There’s an 8.8” infotainment screen – standard fare across all models – angled towards the driver that can be controlled via a rotary switch, while there are very few buttons peppered about the cabin to give an overall airy and uncluttered look. A three-spoke multifunction steering wheel wreathed in leather is ergonomically sound if a touch too big. You also get leather pews in the instance of the Individual and Astina trim variants that are electrically operated for the driver’s side. Overall, the cabin is driver-oriented and lives up to the Jinba-Ittai (the connection between a steed and its rider) company philosophy with all driver controls well-judged to appease the driver’s whims.

While the styling and cabin appointments remain lofty highlights of the new Mazda 3, sadly the overall packaging has been compromised in the hatchback variant. The rear quarters have very limited leg and headroom space, which are further exacerbated by the thick C-pillar that imparts a deplorable feeling of claustrophobia. The boot, meanwhile, measures 295 litres in the hatch and a slightly more commodious 444 litres in the sedan.

Two naturally aspirated, four-pot petrol engines are on offer; a 1.5-litre with 88 kW and 153 Nm and a 2.0-litre mustering 121 kW and 213 Nm. The former is paired with either a six-speed manual or six-speed automatic, while the latter is exclusively linked to a six-speed automatic and is a reserved for the flagship Astina trim model. At the launch of the model in Gauteng, we managed to sample both engines in automatic guises and, right off the bat, it is here that the vehicle’s sheen is slightly dulled, and the package comes a bit undone.

Both engines, and the smaller of the two even more so, offer lacklustre performance and take some time to get going when you push down on the throttle. Yes, while there is a more powerful engine in other markets using a higher compression ratio of 16:3 and dubbed Skyactiv X, which is said to offer slightly more low down torque and efficiency similar to that of a diesel engine, it is sadly not offered here due to our poor fuel quality. But I still concede that Mazda needs to move on with times and go the turbocharged route for better engine tractability and response.

That said, the current engines are adequate once on the move, but you will struggle to overtake slower moving traffic, which will require a bit more planning to be executed safely. Mind you, this will be further compounded with a full complement of passengers and luggage. Mazda ought to, in my opinion, consider offering diesel engines as an alternative here. Should that anomaly be sorted, the Mazda 3 will be a serious force to be reckoned with in its segment, because the rest of the vehicle is simply superb.