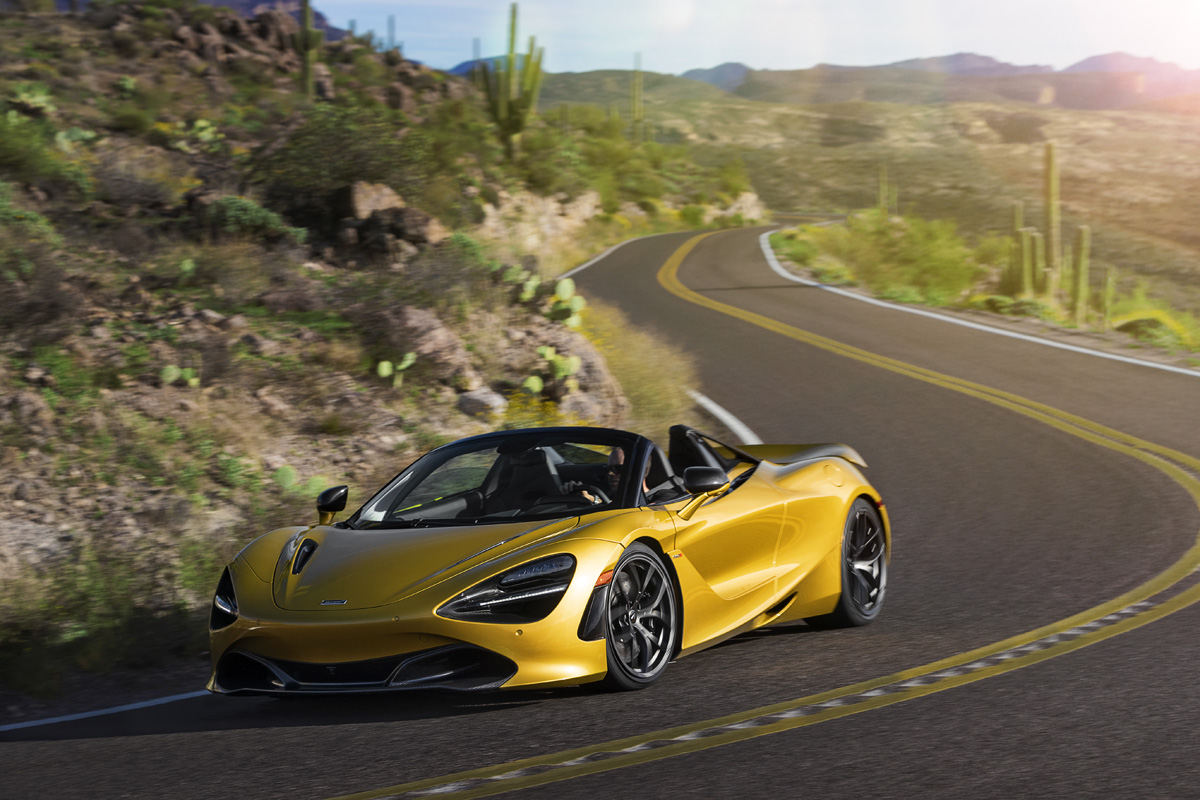 We’re privileged here at Driven for having, in recent times, sampled both the McLaren 600 LT (Long Tail) and 720 S Coupe Spider variants, in relatively successive stints. The former is a no-holds-barred, purpose-built mid-engine sportscar that delivers a more focussed and visceral driving disposition than its 570 S sibling. The latter, meanwhile, is a warp-speed, mid-engine time-machine that leaves both driver and passenger stumped with its turn of speed. Now both models have gone alfresco, thanks to a folding roof that should add another layer of fun to the already exciting models.

The launch of both the McLaren 720 S Spider and 600 LT Spider expands the respective models’ tally to also pander to customers looking to bask in the elements, while immersed in the visceral driving experience we have come to expect and appreciate from the brand. Thanks to the carbon fibre tub construction, a tradition that dates to the McLaren MP4/1 Formula race car, chopping off a McLaren’s roof negates any strengthening of the chassis – which adds dead weight – as the carbon fibre offers enough inherent structural rigidity and unparalleled occupant safety. This, in turn, ensures a low centre of gravity, not to mention a lower overall kerb weight compared to its metal hewn rivals.

In a market awash with an array of sports cars, McLaren found it befitting to have a two-pronged approach in launching its duo of Spider versions of existing models in its portfolio. The 600 LT Spider, which headlines the company’s Sport Series, is essentially an open-top version of that Series’ most hardcore model. Meanwhile, the 720 S Spider, is the opened roof variant of the outfit’s Super Series range and a model that placed the mid-engine supercar market on its head. Mind you, an even hotter variant, bearing the LT moniker, is still in the works and will likely push the current model’s performance envelope to even higher echelons, but that remains a story for another day. 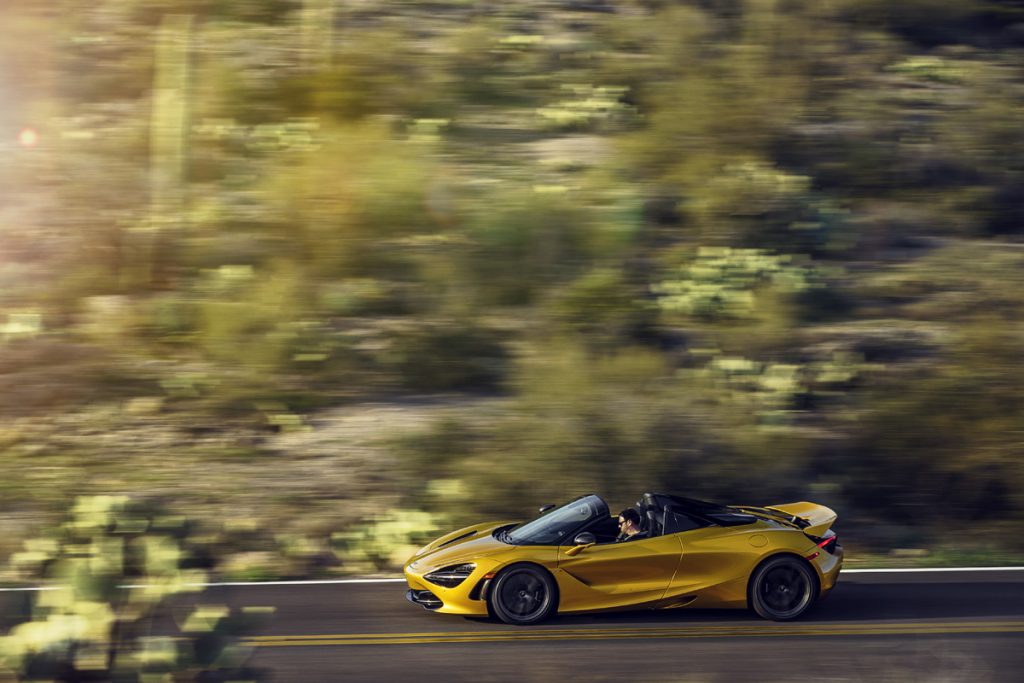 For now, however, it is all about the Spiders that meld searing performance and open-top motoring to thoroughly ruffle some hairstyles or, should the driver so wish, cruise down the boulevard in relative comfort. But these remain performance cars of the highest order and, as such, have the numbers to support this disposition quite admirably. For starters, the 600 LT Spider harbours a 3.8-litre twin-turbo V8 that delivers 441 kW at 7,500 r/min and 620 Nm at 5,500 r/min. It drives the rear wheels through a seven-speed dual clutch gearbox and, with a dry weight of only 1,297 kg, it can dispatch the 0-100 km/h sprint in 2.9 seconds, break the 200 km/h in a scant 8.4 seconds on its way to a top whack of 324 km/h (315 km/h with the roof open). Weighing only 50 kg heavier than its Coupe version, performance drawbacks should be insignificant.

The 720 S Spider, meanwhile, spins an even more powerful web, thanks to its 4.0-litre twin-turbo V8 engine that musters 530 kW and 770 Nm via a seven-speed dual clutch gearbox – enough to help it thread from 0-100 km/h in 2.9 seconds, slingshot past the 200km/h mark in 7.9 seconds and top out at a heady 341 km/h (325 km/h with the roof down). If having driven both their tin-top variants is anything to go by, the Spider models should promise blistering performance, race car panache and exclusivity in equal measure.

Hewn mostly from carbon fibre material, the models are rigid in their construction, but considerably lighter than many of its closest rivals. In fact, pound for pound, the 600 LT Spider is said to be the lightest model in its segment by about 75 kg to its nearest rival, a fact that also rings true for the 720 S Spider, which weighs in slightly lighter than both the Ferrari 488 Pista Spyder and the Lamborghini Huracan Performante Spyder by virtue of its carbon fibre chassis.

Comfortably the lightest car in its competitive set, with a lightest dry weight of 1,332 kg – 88 kg less than the 1,420 kg dry weight of its closest rival – the new 720S Spider is also lighter by 9 kg than the first-generation Super Series 650S Spider, as well as having enhanced refinement. The new Spider weighs in just 49 kg – or less than 4% – above the 720S Coupé, the difference primarily associated with the Retractable Hard Top (RHT) and tonneau system.

The cockpit-like design of the 720S Coupé is recognised for the sense of 360-degree vision it provides, allowing light to flood into the cabin and setting a new benchmark for visibility.  This philosophy of unrivalled vision is central to the second-generation Super Series and the new Spider moves the game on again, with unique, glazed flying buttresses further aiding driver visibility as well as adding visual drama to the car. 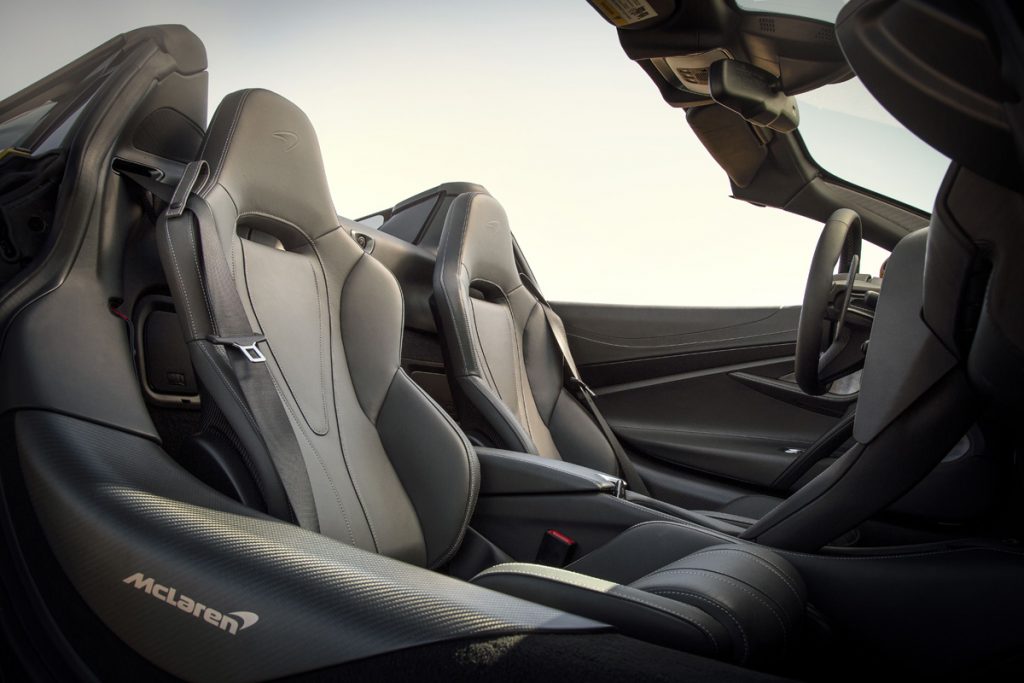 The leading edge of the buttress features an aerodynamic carrier to guide airflow, before dramatically tapering off to expose darkened glazing; the design and the use of glass delivers a 12% improvement in over-the-shoulder visibility compared to the previous McLaren Super Series Spider.

To accommodate the RHT, the Monocage II-S features a new carbon fibre upper structure engineered to sit as close as possible to the air charge coolers and the intake plenum.  This maximises luggage space; there are 58 litres of stowage available under the tonneau cover with the roof raised. The tonneau cover also sits lower than that of a 650S Spider by 25 mm, extending rear visibility by 7.5 m.

The new McLaren 720S Spider offers an unparalleled blend of extreme performance, crafted luxury, driver involvement and daily usability – all with the additional exhilaration of open-air driving whenever required.

“As the most accomplished convertible supercar ever, the new Spider delivers across a remarkable spectrum of abilities to outstandingly high levels, and as lightest in class with an increase of just 49 kg over the 720S Coupe, moves us even further ahead of our competition in the weight race,” says Mike Flewitt, Chief Executive Officer of McLaren Automotive.

Flying McLaren’s performance flag, the introduction of the 600 LT Spider and the 720 S Spider takes the fight directly to the Italian and German arch-rivals. They set the scene for what promises to be an exhilarating drive that can now be enjoyed with endless headroom, the sound of the V8 amplified a few decibels higher still, and a particularly sinewy road beckoning ahead. What’s not to like?