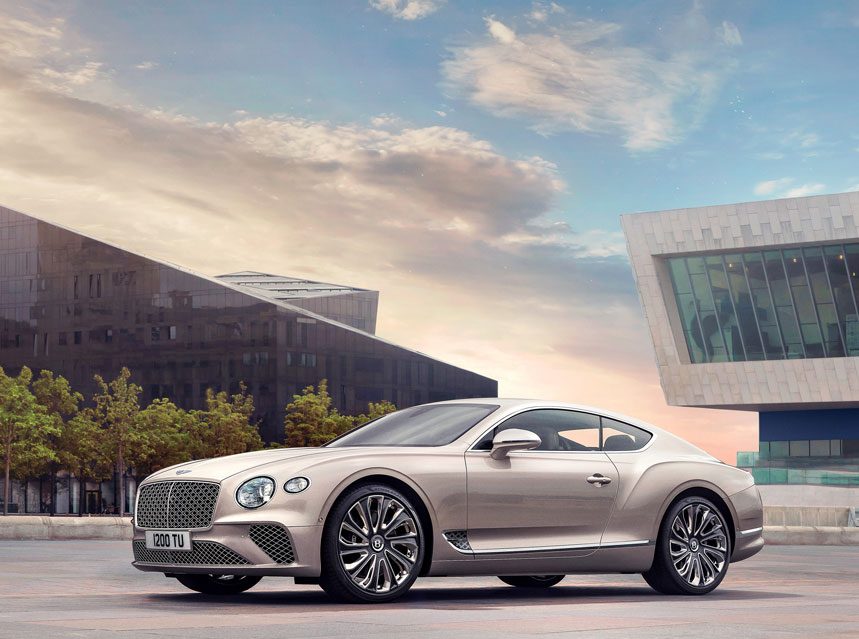 From the very first Bentley to carry the name of W.O. Bentley, the marque’s history is filled with drama and passion. As a fundamental part of the chronicle of the Bentley brand, Mulliner has created some of the most bespoke Bentleys, if not automobiles in general, of the 20th century. The latest iteration of the sleek Continental GT Mulliner coupé is no exception.

The wild ride of fame and fortune of the Bentley brand was nothing short of a swashbuckling adventure from the day that W.O. Bentley’s first 3.0-litre engine burst into life in 1919. It was a time of excess and a rollercoaster of daring visions, extraordinary characters, narrow escapes, near peril, breath-taking comebacks and glittering achievements. The twenties were about to introduce the world to luxurious excess previously almost unheard of, as a new automobile with the “winged B” was born.

South Africa has more of an incidental link to the Bentley brand. The most well-documented history must be that of the infamous Bentley Boys – a group of 16 wealthy motoring enthusiasts who drove Bentley sports cars to several racing victories in the 1920s and kept the marque’s reputation for high performance alive in a time when its honours on the race track were outshone only by its financial woes. At the time, Bentley Boy, Woolf “Babe” Barnato – heir to the Kimberley (South Africa) diamond magnate, Barney Barnato – was so enthused with the marque that he bought the company and became its Chairman in 1926.

Barnato showed an extraordinary passion for Bentley and, decided in March 1930, to take on Rover and its Rover Light Six car – which had successfully raced and beat **Le Train Bleu** for the first time. At the time he bet £100 to better the Rover’s performance against the Blue Train with his 6.5-litre Bentley Speed Six.

Driving against the train from Cannes to Calais, and finally to London after a ferry ride to Dover, Barnato won in his H.J. Mulliner-bodied formal saloon. 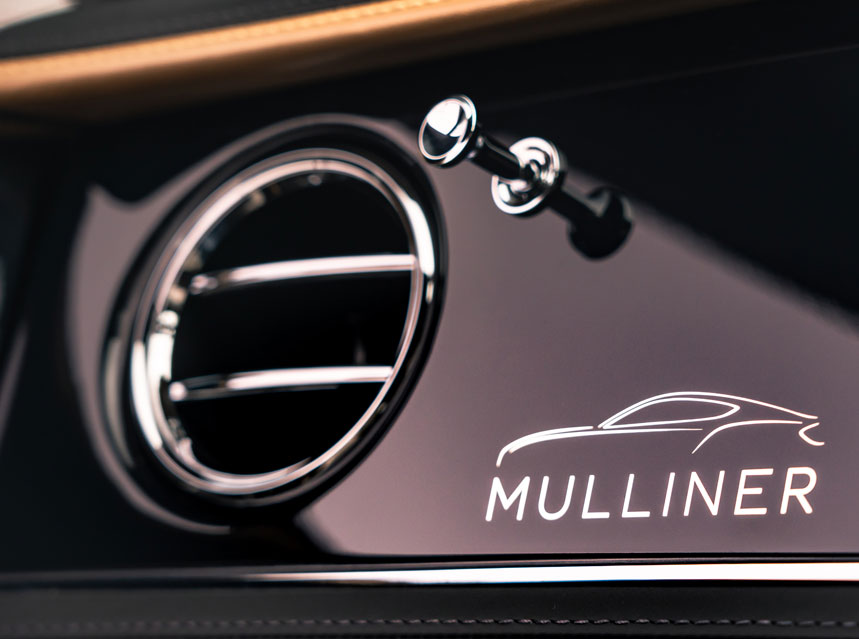 Mulliner exists – claims its website – to “respond to the requirements of Bentley’s most discerning customers.” In layman’s terms, this means that in the world of Mulliner, anything is possible, and nothing is too bespoke to be considered. From requests as simple as monogrammed upholstery, to elaborate, tailored body modifications that can only be undertaken with the proven expertise of a truly established coachbuilder, the highly skilled and dedicated Mulliner craftsmen deliver luxury on a significantly elevated scale.

Mulliner coachbuilders’ roots date back to the 1500s – that is almost 500 years of craftsmanship experience and heritage. The firm’s original focus was creating luxurious horse-drawn carriages. The first Mulliner work to be showcased on a Bentley chassis came in 1923, three years before Woolf Barnato became Chairman. Mulliner exhibited a two-seater 3.0-litre Bentley at the Olympia Show in London, which also happened to be a mere four years after Bentley Motors itself was founded.

In 1952, Mulliner coachbuilt one of the most iconic Bentleys ever – the R-Type Continental, which inspired the design of today’s Continental GT. Five years later, Mulliner introduced the Continental Flying Spur, a special four-door saloon built on the Bentley Continental chassis, and in 1959, Mulliner officially became part of Bentley Motors, setting up its workshops in Crewe.

While the Continental nameplate lineage can be traced back many decades, the Continental GT coupé has a much more recent history for the brand. Debuted in 2003 as the very first new model Bentley to be created under the stewardship of Bentley’s new parent company, Volkswagen AG, this illustrious grand tourer also has the distinction of being the first Bentley to be created using mass-production techniques.

Considering the seemingly polar opposites at which the Bentley Mulliner coachbuilding history of hand-crafted luxury, and the idea of mass production of a luxury automobile, stood from one another, it might have been hard for the craftsmen and women of Bentley Mulliner to envisage a world where their skills would be needed in this new, dynamic, yet uncertain future.

Of course, nothing could be further from the truth, and throughout the novel history of the Continental GT, the Bentley Mulliner influence played an ever-increasing role in producing ever more bespoke versions of the car. A variety of first- and second-generation GT convertibles, coupés, and Speed derivatives received Mulliner driving specification components.

While creating over-the-top automobiles is entirely possible for the world’s oldest coachbuilder, their expertise is better suited to enhancing the luxurious characteristics intrinsic to the Bentley brand. Adding to their Collections portfolio, Bentley Mulliner unveiled the Continental GT Mulliner at the Salon Privé in September 2020, as an exercise in bespoke craftsmanship with unique Mulliner features that define the pinnacle of luxury in the Continental family.

The car sits on new and unique 22” Mulliner wheels, with a bespoke design that looks ravishing in its painted and polished finish. The centre badge of each wheel is self-levelling, keeping the iconic Bentley ‘B’ upright at all times. 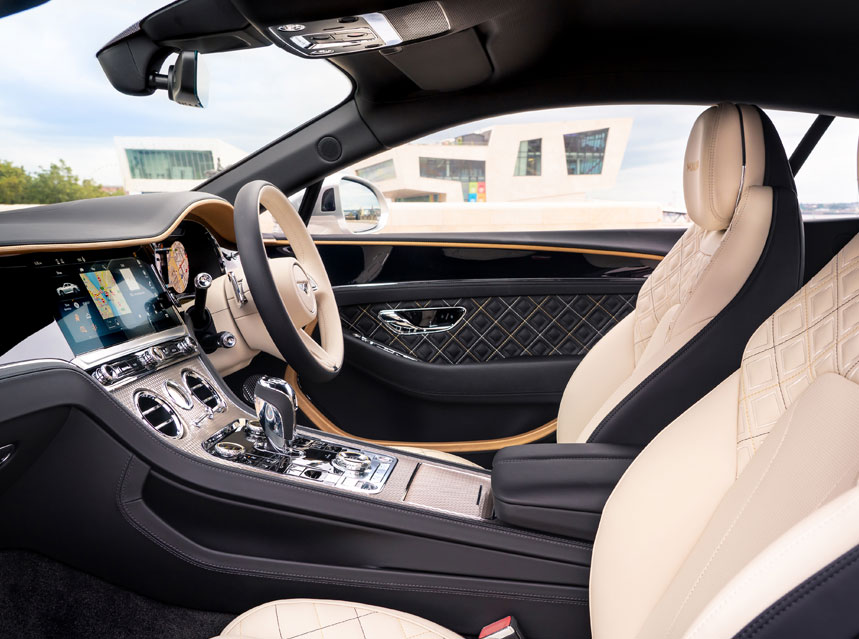 With eight exclusive seating and trim colour combinations, each with a unique three-colour split, the interior of the Continental GT Mulliner has been expertly curated by Bentley Mulliner’s artisans. These captivating interiors are inspired, according to Bentley, by the world around us, from luxurious French fabrics to prestigious sporting destinations. The ‘Cambric’ colourway, for example, features hides of “Beluga and Linen” with a refined Gold accent for a tri-tone combination, evoking the feeling of summertime in the south of France.

Equally enthralling is ‘Pavilion’, a homage to the sport of cricket, with “Cricket ball and Linen” hides, complemented with silver accent hide and stitching. The addition of this accent stitch provides a new depth of character to the Continental GT Mulliner, showcasing the painstaking attention to detail of the car’s hand sewn elements. In addition, deep pile Mulliner floormats featuring contrast micro-piping and chrome Bentley ‘B’ retention caps create a harmonious flow from the ground up.

The brand-new bespoke instrument panel features an exclusive brushed metallic finish and new style of dials. Together, says Bentley, they have created a “fusion of digital and analogue” which is likely best reflected in the Breitling for Mulliner clock in the centre fascia. The balance of innovation and bespoke design creates an ideal compromise between heritage and contemporary technology, supporting the Bentley Mulliner ethos.

While the Bentley Continental GT Mulliner is a showcase for the marque’s skill and craftsmanship, it is ultimately also a vehicle for bespoke expression. The buyer remains responsible for most aesthetic decisions when creating each GT Mulliner. From colour splits and paint finishes, to mood lighting, the buyer curates his or her own car to best represent their personal taste and style. 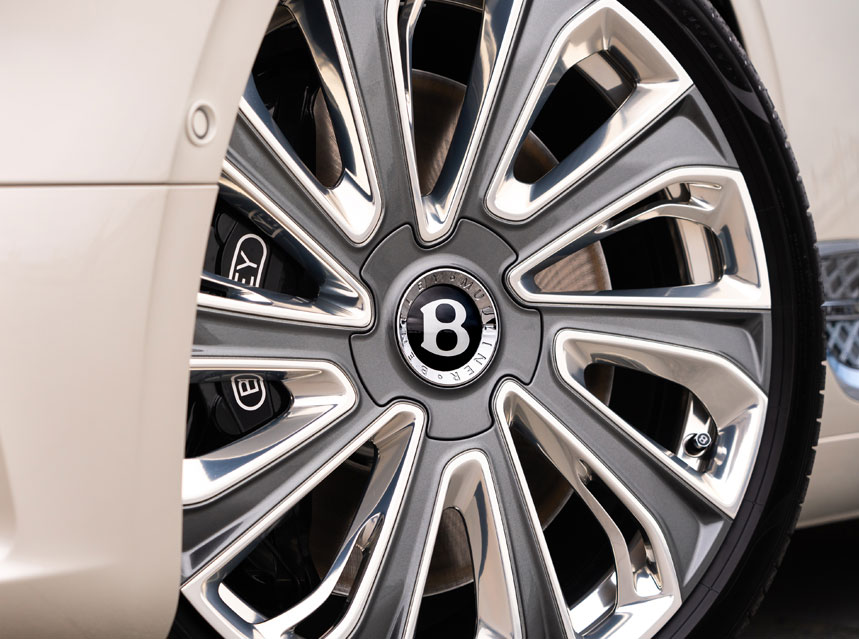 DISTINCTION ON THE OUTSIDE

The third-generation Continental GT is already an arrestingly handsome work of automotive art. By adding distinctive Bentley Mulliner detailing, such as branded wing vents and painted mirror housings in satin silver, the grand tourer’s lines evoke a sense of speed, drawing the eye across the muscular profile of the car. As mentioned, the GT also features new, painted and polished 10-spoke 22” Mulliner Wheels, their duo-tone finish creating depth to the contours of the wheel.

Two distinctive engine options put the power of choice in the buyer’s hands with the agile V8 engine featuring the emotive Bentley burble, while the ferocious W12 – an engine unmatched in its class – represents the pinnacle of power in the model range. The V8 can reach zero to 100 km/h in 4.0 seconds before powering on to a top speed of 318 km/h. The W12, of course, offers mind-bending acceleration as evidenced by the 0 – 100 km/h sprint time of just 3.7 seconds, with a thrilling top speed of 333 km/h awaiting those who dare push this luxuriant sprinter to its maximum velocity. Whichever you choose, you can expect effortless handling and smooth acceleration in any environment, as is the Bentley way.

Naturally, as the most luxurious Continental GT ever made, the Mulliner is complemented by the addition of Bentley Dynamic Ride as standard. The system utilises an intelligent 48-volt semi-hybrid system to counteract lateral rolling forces to instantly correct any hint of body-roll, and so retain maximum tyre-to-road contact. This delivers class-leading ride comfort, according to Bentley, although we can well imagine that exceptional handling is the inevitable result. A further advantage of the 48V system is its silent, instantaneous response with sufficient power to deal with any type of irregular road surface.

Bentley Mulliner is renowned throughout the automotive world for crafting some of the most individual Bentleys ever created. Bentley Mulliner is the birthplace of coachbuilding, and one of the last remaining producers of luxury automobiles of this nature. The Continental GT Mulliner undoubtedly raises the bar for the grand tourer genre, and I am left quite perplexed as to where the bespoke road will lead to next. Then again, if Bentley Mulliner has proven anything in their half a millennium of existence, it is that they have the ability to embrace change, and to persistently create objects of lasting desire.