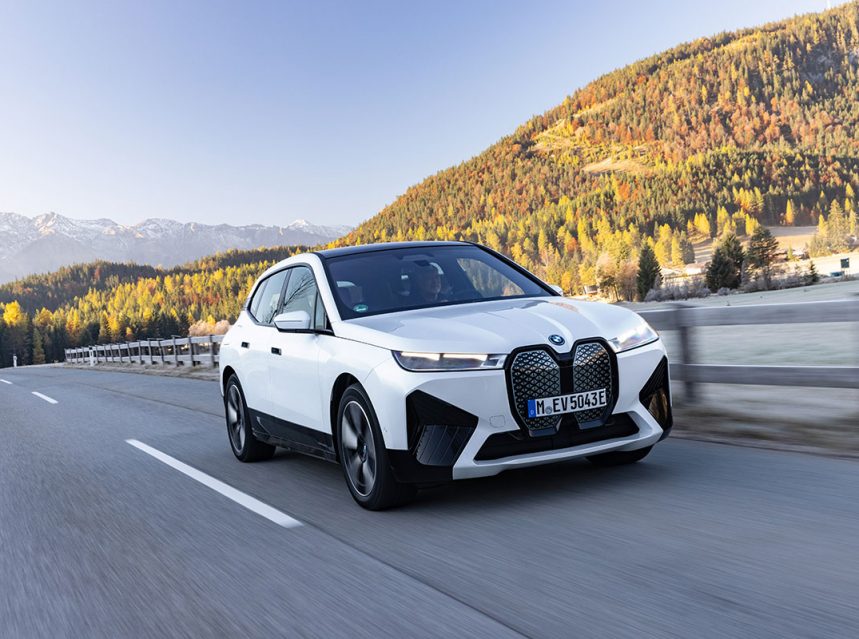 It is bold and imposing, and controversially styled. It also heralds a new age in mobility for BMW and, somewhat contentiously, redefines the Sport Activity Vehicle (SAV) concept as the German marque forges ahead with the Neue Klasse models expected from the middle of the decade. As the new technology flagship for the Bavarian brand, the BMW iX delivers a deliberate statement of intent from the automaker.

While the new BMW iX shares its exterior length and width dimensions with the BMW X5, has the height of the X6 and the wheel dimensions of the X7, the iX moniker does not conform with the conventional numerical system for BMW models. Despite its X nomenclature, traditional SAV design traits and advanced all-wheel drivetrain, it is distinctly on-road biased – as attested to by its relatively low 203 mm ground clearance and low-profile 20” rubber tyres.

The pioneering character of the iX shines through in its exterior design with its large, upright double coffin grille – inspired by the BMW Garmish concept and first used on the BMW 4-Series. And yes, it does look slightly better in real life than it does in images.

The contentious grille is almost completely blanked off, and its surface, with complex design patterns, embodies self-healing and scratch-resistant properties. It also incorporates camera and radar sensors for the new iDrive control/operation system. In addition, an array of discreetly positioned “shy tech” devices (camera, radar and ultrasonic sensors) are inconspicuously integrated into the body front and rear. BMW uses the term “shy tech” for technology that is non-intrusive and fully immersive.

Cleverly, the BMW roundel above the large kidney grille serves as a filler neck for washer fluid, and surprisingly, the bonnet has no opening mechanism – it can only be accessed by workshop technicians.

The side has minimalist surface sculpting that extends to the rear, which is somewhat mundane compared to the ornate frontal view. Its door handles, integrated flush with the bodywork, frameless windows, and low roofline set it apart from its X relatives. Implementing a shy tech rear-view camera with a cleaning system integrated into the BMW roundel on the tailgate, and light units positioned beyond the tailgate opening, ensure all light signals are clearly visible when the tailgate is open. Distinctive blue accents highlight its electric identity.

According to BMW, the iX was designed from the inside out – creating a modern, minimalist interior, alluding to a luxurious lounge-style ambience. Prominent features include the digital BMW Curved Display grouping, the most advanced iDrive operating system, sustainable, high-quality materials, and shy tech.

Making its debut in the BMW iX, the hexagonal steering wheel is another exciting feature. Its polygonal geometry makes it well suited for alternating between automated and active driving and offers a better view of the Curved Display.

The free-standing BMW Curved Display (making its production vehicle debut) reduces the number of interior buttons and switchgear by approximately 50%. Combining a 12.3” info display and 14.9” control display in a single unit and with new, customisable display options, this functionality is intuitive and user friendly.

Driving the top model iX xDrive50 with our route set to the exclusive Interalpen Hotel in the mountainous Tyrol region of Austria, our progress was marked only by an acoustic hum – a unique sound created for BMW by composer Hans Zimmer.

Housing a 190 kW electric motor on the front axle and a 230 kW unit on the rear axle, achieving a total output of 385 kW and 765 Nm of torque, the iX xDrive50 is quick for a 2.5-ton behemoth, reaching 100 km/h from standstill in only 4.6 seconds (compared to 3.9 seconds for a thundering X5 M Competition, weighing approximately 300 kg less and with more power on tap). The top speed is limited to 200 km/h.

Selecting Sport on the e-Drive system, neck-snapping acceleration is prevented by BMW’s intelligent control of the electric motors. With instant torque available over the entire flat torque curve, the measured power delivery enhances consistency and driveability.

Given our average usage of around 23-26 kWh, the claimed range seems plausible even in Sport mode. With the latest DC (direct current) charging technology, the battery can be replenished at up to 200 kW (the maximum charging capacity of the xDrive40 is 150 kW), with 120 km of range added in only ten minutes.

In motion, the artificial hum mimicking the electric motors can be altered (in Sport mode, the aural spectrum is slightly more audible) and an acoustic pedestrian protection system in the iX – artificially generated sound emitted through exterior speakers up to driving speeds of 21 km/h in European markets – alerts other road users of its approach.

With a suspension configuration similar to that in the X5, including Integral Active Steering, two-axle air suspension, sport brakes and 21” wheels and tyres, the iX handles similarly to a regular X – solid and comfortable, even if it feels heavier.

Locating the battery low down in the area traditionally reserved for an internal combustion engine ensures a low centre of gravity and even weight distribution. The electric all-wheel-drive system enables variable power transmission ranging from pure rear-wheel drive to full all-wheel-drive, providing the iX with prodigious levels of grip. However, when negotiating a series of switchbacks or S-curves, its shifting bulk does tend to lead to a certain amount of body roll.

Wind noise is minimal, even at higher speeds, and road and tyre noise can be cancelled out by the super sound of the 12-speaker Bowers & Wilkins sound system.

For a large, heavy crossover, the ride and handling of the iX are impressive. The lounge-like comfort in the cabin and luggage space of up to 1,550 litres are sure to appeal to many buyers. The full-electric SAV – set to go on sale in South Africa before year-end with pricing indicated to start from R2,150,000 for the iX xDrive50 and R1,650,000 for the iX xDrive40 – serves as a sound indicator of what can be expected from BMW in the near future.