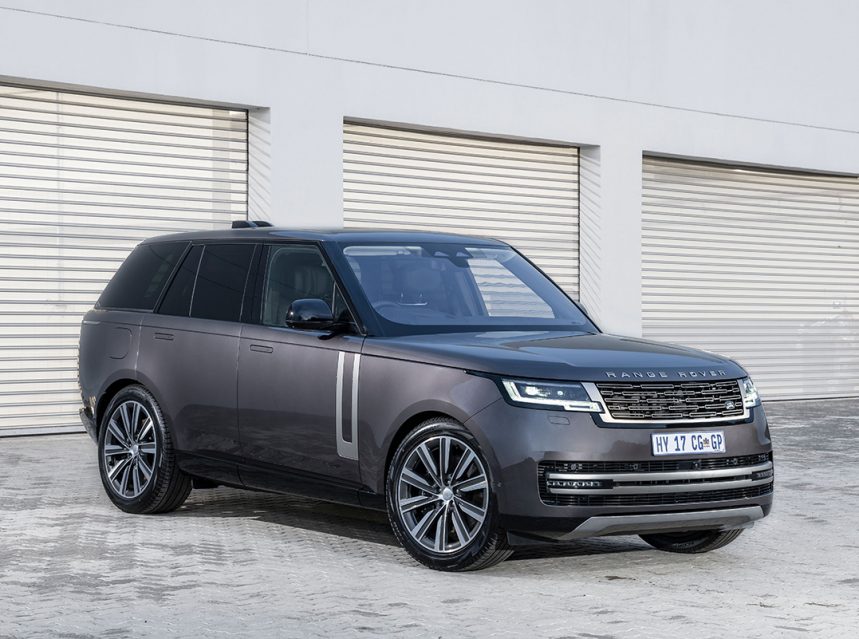 A New Era of Luxury |

Land Rover South Africa’s biggest reveal of the year is imminent, but before we get to drive the luxurious behemoth, Land Rover granted us an exclusive preview of their only homologation model.

Although officially launched in 1970, the Range Rover luxury wagon’s origins stretch farther back to the middle of the 20th century.

In 1951, Land Rover began experimenting with a larger model than the Land Rover Series, with the aim of creating a vehicle that could carry more passengers in greater style than the utilitarian Land Rover allowed. Developed on the Rover P4, the “Road Rover” was eventually shelved in 1958 and lay dormant until late 1966 when it was resurrected with a new vision: to create an uncompromising luxury off-roader for the elite. And a car that could not only go anywhere but could go there in unqualified style.

The first prototype Range Rover was finalised in 1967, and a further 26 Velar-badged development vehicles were constructed between 1969 and 1970. Interestingly, the Velar name was derived from the Italian “velare”, meaning to veil or cover. Range Rover development engineer, Geof Miller, used the name as a decoy for registering pre-production Range Rovers.

The Range Rover was finally officially launched in 1970 and garnered significant praise from motoring enthusiasts and design aficionados alike. It even cracked a nod as an “exemplary work of industrial design” from the Louvre Museum in the early 1970s.

Five generations in, the New Range Rover stands proud as Land Rover’s most advanced, luxurious, and, many would argue, most beautiful creation ever. Land Rover South Africa plans to launch the car officially in the middle of the year and has brought a homologation unit to South Africa to prepare for the big car’s big day.

Revealed to the international media back in October 2021 (see our launch review in the December 2021 edition), it was clear that the New Range Rover had evolved far beyond where the current model is, both aesthetically and in terms of technical proficiency. Yet, as is often the case, the full impact of the car’s imposing presence can only truly be experienced in the metal, so to speak.

Land Rover revealed the new Range Rover at the Land Rover Experience Centre in Johannesburg, where we had the opportunity to poke and prod the new car, uncovering many of the design and techno tricks it has up its sleeve.

The New Range Rover is the marque’s most powerful yet, and along with that, it is also the most technologically progressive.

Looking first at the seats, Land Rover has gone all-out to craft exquisite seats for all passengers, using materials that provide a soft yet firm set of seats. Even the headrests are designed to adjust in multiple ways, allowing a perfect fit for each occupant. Land Rover and its partners have also gone the extra mile to ensure that the sustainability factor of the materials used is the highest of any Range Rover ever. The interior upholstery, for example, uses a high number of recycled materials, including a near-aniline leather that uses fewer dyes and chemicals yet retains a high-end luxurious feel.

Wood veneer surfaces abound in the cabin, but instead of simply laying swathes of wood on strategic places, wood veneer surfaces comprise many individually-cut pieces that have been painstakingly applied by hand. Customers have the luxury of choosing from as many as 1.6 million possible configurations and enhancements for their Range Rover, including multiple bespoke paint finishes, metal trims, sustainable fabrics, a variety of alloy wheel designs, and even ceramic surfaces.

In the tradition of the most bespoke of British luxury automobiles, the New Range Rover takes personalisation to a new level.

TECHNOLOGY FOR A NEW AGE

Naturally, once driven at launch, a more in-depth analysis of the features aboard the New Range Rover will follow, but for now, we’ll glance over the trickery that has been confirmed for availability in South Africa.

The centre point to the New Range Rover’s digital interior offering is the new Pivi Pro infotainment system with its 13.1” touchscreen curved display. With a built-in navigation system with voice recognition, along with wireless Apple CarPlay and Android Auto, seamless connectivity is guaranteed, while a Meridian sound system with Range Rover’s trademark immersive surround sound experience is a superb foundational addition to the tech line-up.

As we have experienced with previous Range Rover and Land Rover models, digital touchscreens abound in the cabin, and ahead of the driver, a 13.7” display shows vehicle status, trip information, navigation info, entertainment system updates and more, all controlled remotely via the steering wheel.

Rear passengers are as ensconced in luxury as the front passengers are, with an equally impressive array of tech to play with. Depending on the chosen customisation and seating options, this may include individually electrically-adjustable seats and individual entertainment screens for each seat. Individual rear climate control is par for the course as well.

Land Rover South Africa has made the full array of models available to local buyers. A choice of HSE and autobiography models can be had, with a First Edition special – finished in Sunset Gold satin paint – available in the first year of Range Rover production.

For the first time, Range Rover will be available in a seven-seat configuration, although the standard five-seat car will likely retain its popularity in our estimation. For owners seeking a more exclusive cabin experience, a Range Rover SV with the Signature Suite cabin will provide a maximum of four seats, with more than 90 cm of legroom available in the rear.

For most models, a short-wheelbase and long-wheelbase version will be available, the latter providing the additional room required for a third row of seats.

The New Range Rover will debut with three engine options, including a new BMW-sourced P530 4.4-litre V8 engine featuring two parallel twin-scroll turbos. Producing 390 kW and 750 Nm of torque, the behemoth promises to deliver a zero to 100 km/h sprint time of 4.6 seconds (with Dynamic Launch engaged), with a quoted top speed of 250 km/h. A 3.0-litre straight-six turbodiesel motor is offered in the D350 model series, boasting 257 kW and 700 Nm of torque and a 100 km/h sprint time of 6.1 seconds.

A third drivetrain option in the form of the P510e plug-in hybrid combines Land Rover’s 375 kW straight six-petrol engine with a 38.2 kWh lithium-ion battery and a 105 kW electric motor. Reported to have a range of 113 km, the hybrid Range Rover should shift to 100 km/h from standstill in 5.6 seconds.

Finally, an all-electric version is scheduled to take a bow in 2024.

Power across the Range Rover range is delivered via an eight-speed ZF-sourced automatic transmission.

In these changing times, crafting a desirable, luxurious vehicle such as the New Range Rover can be challenging. Customers demand ever-increasing levels of luxury and technology, requiring ever more complicated systems. It remains to be seen how the New Range Rover stacks up against its revered forebears. Undoubtedly, the new car will, unlike many of its predecessors, probably not see too many jaunts of the off-road variety, as history has proven Range Rover’s ability to tackle even the most challenging terrain with grace and ease. Then again, at a projected entry price of around R2.86 million, who would want to risk the dings and scratches that inevitably come with driving off the beaten track?