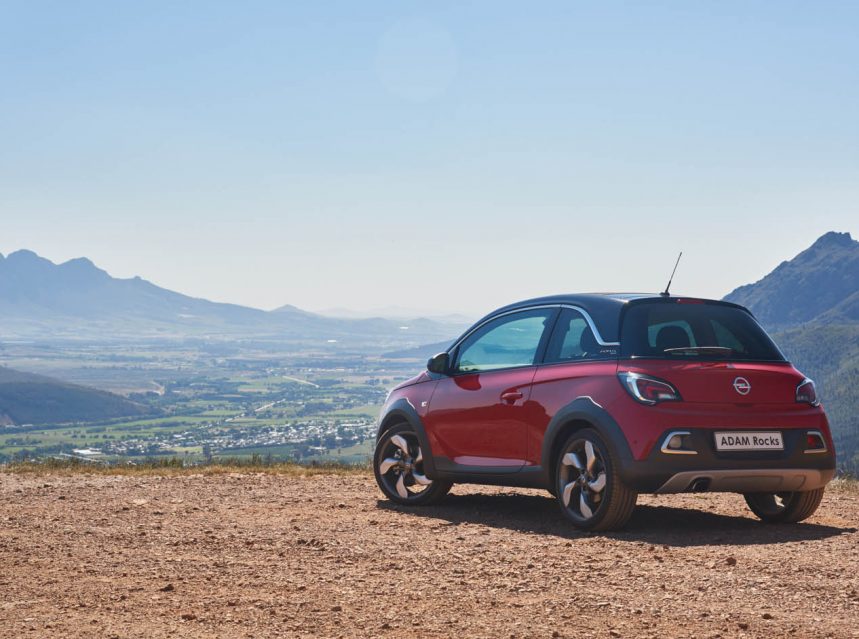 In an affluent, but quirky, market segment where the iconic Fiat 500C has ruled the roost for a number of years, the launch of the equally fashionable Opel Adam Rocks is set to change buying patterns quite dramatically. For starters, the Adam Rocks brings robust German build quality to the party, while the Fiat is, well, Italian.

Launched recently to the media in Johannesburg (where altitude sucks 17% off the power band on non turbo-enhanced cars) the Adam Rocks is propelled by an 85-kW/170 Nm 3-cylinder petrol engine which, to the surprise of most media members, felt capable of outperforming larger 4-cylinder units.

It is a gem of an engine with its characteristic gruff 3-cylinder sound that is claimed to use only five litres of fuel every 100 kilometres. Even the emissions count, at 115 gm/km, dips under the tax radar of 125 gm.

The shortish (100 km) launch drive was an eye-opener in that handling, steering and predictable braking were all of a high standard. The 6-speed gearbox has well chosen ratios, but the diminutive size of the engine precluded any party tricks such as starting in second gear. However, why do it at all, when the smooth shifting manual system is a joy to use?

On the downside, the ride felt somewhat firm and even harsh but this is the price you tend to pay for good road holding and safe handling.

Seating at the rear is somewhat limited, but shorter persons should be able to fit in with reasonably legroom on offer. The two-door design of the Rocks, however, makes getting in and out of the car a tricky event for rear seat passengers.

Clearly then, the Rocks is aimed at fashion conscious young couples who will appreciate the ability to personalise their car so that it will be unlike any other Rocks while, at the same time, making a powerful, outdoorsy statement when driving with the swing top canvas roof open.

That the Adam Rocks is way beyond mundane and is aimed firmly at a young, well educated and ambitious market segment is further illustrated by disc brakes all round, attractive 18″ alloy wheels, rain sensing wipers, automatic headlights, hill side assist, and even a tyre pressure monitoring system. The brakes are of the ABS and EBD variety, and the fuel tank only holds a very modest 35 litres. Do not despair, since this is good enough for a 700 km range when driven sensibly. There’s no spare wheel, but an inflator kit is provided (for what it’s worth in our conditions).

The Opel Adam Rocks, of which only 150 units will be imported initially, has the potential to be snapped up by semi-affluent young buyers who relish the idea of owning a mini-CUV (Cross Utility Vehicle). It offers the freedom of open air driving, personalisation, a great Infinity sound system, and a tough and masculine appearance that many buyers should find irresistible.