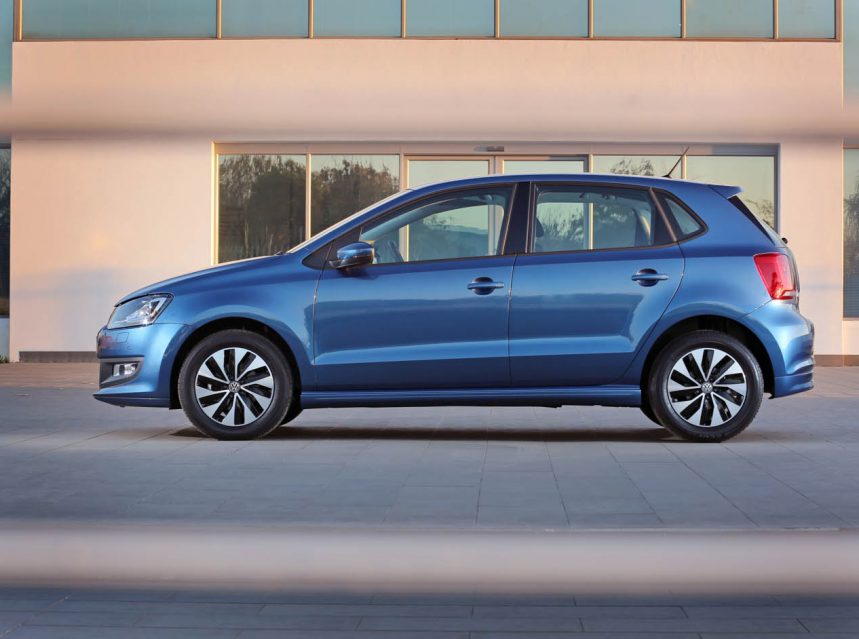 I am currently addicted to a TV programme called Orphan Black. While it has more twists than a curled up shongololo and more shockers than a faulty electric fence, the basic premise of the story focuses on the lives of a group of female clones. During the course of the series, we meet at least eight of these characters; the most fascinating part of which is that despite sharing the same DNA, they are all unique – from their accents and the way they dress, to their personalities. It shouldn’t come as a surprise then that the same could be said about the recently reimagined VW Polo range; the GTI manual and BlueMotion in particular. While they share the same basic DNA, the two cars couldn’t be more different.

Telling the two derivatives apart, just like identical twins, may be tough to tell apart at first glance.. Both share the same chiselled front end, sporty silhouette, and distinctive VW DNA – they even boast the same sized boot and fuel tank. The central consoles share the same layout and functionality; both have a colour touch screen infotainment system, and you’ll find the same nooks and crannies in which to pop your house keys, Woolies latte, and change for the car guard. Both have steering wheel mounted controls and (somewhat oversensitive) front, rear and side park sensors.

The devil is in the detail, however. While the BlueMotion is wearing sensible shoes and a demure cardigan, the GTI is all about stilettos and leather jackets. Look closely and the classic GTI insignia is instantly apparent, with distinctive red strips along the newly designed honeycomb grille and headlights, red brake callipers, dark red tail light clusters and chrome dual exhaust tailpipes. Inside, red stitching is prominent on the leather sports steering wheel, gear lever and handbrake, while the sports seats have a touch of leather and the pedal caps a touch of aluminium. An optional panoramic sunroof adds street cred, as do the 17” Parbolicca alloy wheels and lowered sports suspension. The GTI looks every bit the part of a speed queen.

The BlueMotion leaves the red eyeliner at home, and instead enhances its fine bone structure with clever nips and tucks that is more about function than fashion. Take its burnished radiator grille insert and aerodynamically perfected front spoiler; both of which, as well as distinguishing the BlueMotion from its wild sibling; also ensure significantly reduced air drag, which translates into a more fuel-efficient ride. And the sensible shoes? They’re still pretty 15” Buenos Aires alloy wheels, but with the added bonus of low rolling resistance tyres to once again drive the fuel consumption figures way down. This is one car that’s pretty with a purpose.

Both siblings excel under the bonnet, but for different reasons. The GTI’s 1.8 TSI engine kicks out an impressive 141 kW of power, and ensures an exhilarating top speed of 236 km/h with a blistering 6.7 second 0-100 km/h sprint time. There is also the option of a new Sport Select suspension, which comes complete with electronically adjustable dampers that mean you can adapt your car for the racetrack.

The BlueMotion’s 1.0-litre turbocharged petrol direct-injection engine, by contrast, generates a modest 70 kW of power, and with a top speed of 191 km/h can certainly hold its own, but will battle to keep up with its sportier sibling. Where it does leave the GTI in the dust, however, is in terms of its fuel consumption and CO2 emissions stats. While the GTI’s figures (6.0 l/100 km and 139 g/km CO2) are far from shabby, its sensible sibling gets straight A’s with its score card of 4.2 l/100 km and 97 g/km CO2 emissions rating.

Both of the Polo twins are guaranteed to turn heads, while their distinctive personalities will attract a huge range of potential buyers, whether they are looking for speed or social responsibility. The sheer speed and exhilaration of driving the GTI will make your heart race, while the BlueMotion’s fuel efficiency will bump your karma points and make your wallet swoon. Together, they make the perfect car, and as a pair in one household would tick all the right boxes – the only decision that would remain is just who gets to be the wild child and who the good girl each day.