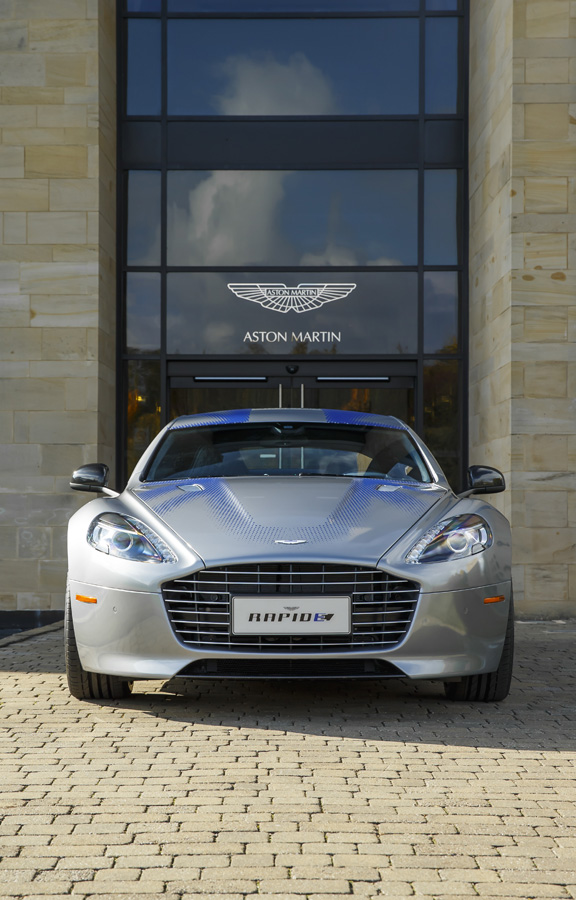 The long-awaited first all-electric model from Aston Martin made its debut on the Lagonda stand at the recent Auto Shanghai motor show. Fittingly so, as the Rapide nameplate on this pivotal model for the British automaker was first used by Lagonda way back in the 1930s.

The production-ready Rapide E – finally unveiled in Shanghai – may share its overall design with its petrol-driven sibling but when looking closer you will find many differences between the first all-electric Aston Martin and its combustion-engine Rapide stablemate. The rumoured next Bond car, sharing space on the stand with an interesting Lagonda SUV concept, was unveiled nearly four years after it was originally proclaimed. At the time Aston Martin was going through a tough time resulting in many layoffs and to get the Rapide E (then called “RapidE”) project going, the British carmaker had to find money from Chinese backers.

In 2016 Aston Martin announced a tie-up with the Chinese technology company LeEco to build the car. This conglomerate, founded by Jia Yueting who also created (and still runs) the EV startup company Faraday Future, pulled out of the joint venture in 2017 – a huge setback for the project. Amidst all this turmoil Aston Martin approached Formula One engineering house Williams to take over the development of the car and get it production ready. Williams Advanced Engineering (WAE), who assisted in the development of batteries for the first-generation electric Formula E racing cars, pulled this off but at a cost – as only 155 Rapide E’s will be built.

Still, the Rapide E is a pivotal model for the luxury marque. Following the success of previous special-edition models, including the Vulcan, the Vanquish Zagato family and DB4 GT Continuation, Aston Martin hopes the Rapide E will establish the company in the all-electric realm. It is the first car to be built at the automaker’s state-of-the-art St Athan production facility – the brand’s so-called Home of Electrification – and represents a pioneering step towards achieving a wider electrification strategy with Lagonda – according to Aston Martin the world’s first zero-emission luxury brand. 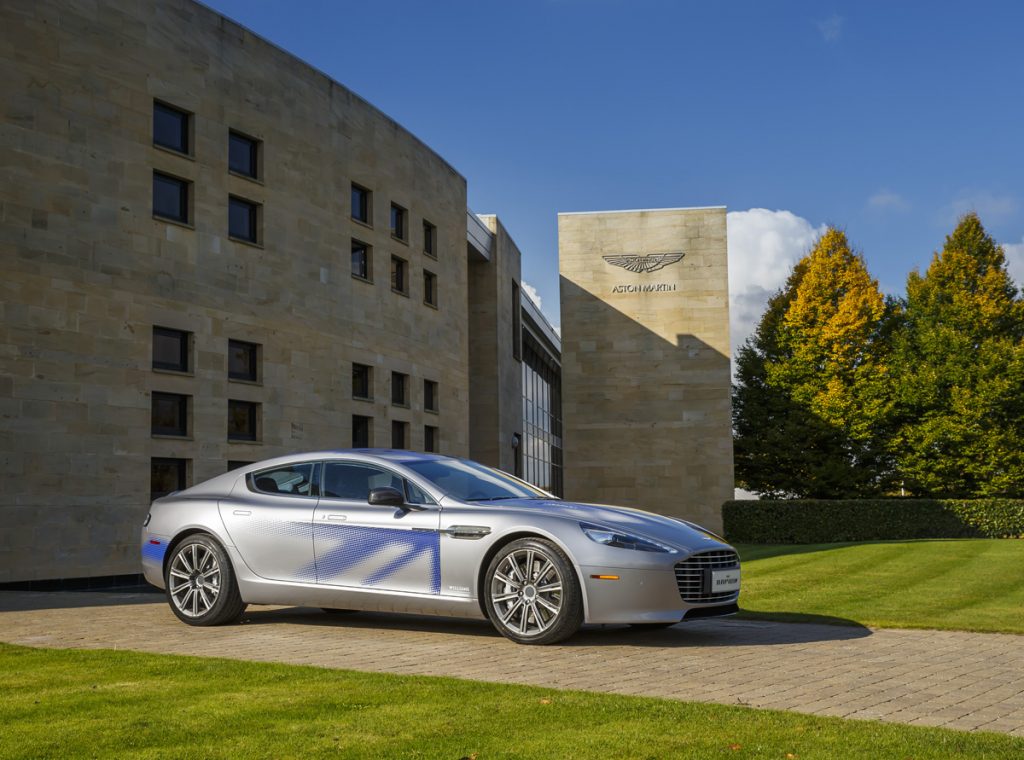 The design and engineering teams worked in partnership to extract as much aero performance from the Rapide’s elegant form. Metal vanes have given way to a honeycomb grille and bigger front aperture to minimise airflow through the car’s body, improving aerodynamic efficiency and increasing range as a result. Externally the Rapide E resembles the combustion engine car, except for a few electric blue accents but under the skin, things are very different. The underfloor was redesigned to streamline airflow from the front splitter to the larger rear diffuser and together with bespoke aerodynamic wheels – shod with low rolling-resistance 21-inch Pirelli P-Zero tyres – the Rapide E is 8% more aerodynamically efficient than the internal combustion model.

Still, it does not have a full floor of batteries, which ultimately limits battery capacity. Inside, the analogue displays of the past have been superseded by a 10-inch digital display behind the steering wheel, and an 8-inch display on the centre console (with buttons below as in recent Rapides) delivers key information to the driver.

Dedicated apps (both Apple CarPlay and Android Auto are supported) allows key information from the car to be remotely monitored. Swathes of carbon fibre assists in attaining the strict weight targets (2,140 kg with battery, about 180 kg more than the normal Rapide S) set for the car. 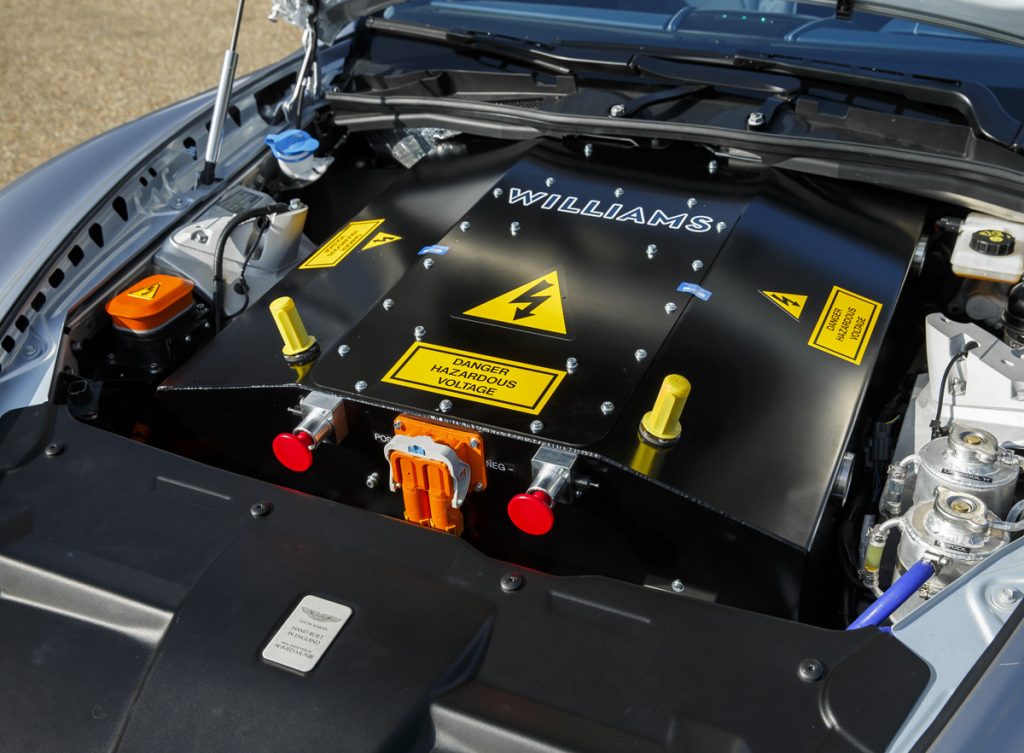 Powered by an 800V battery encased in carbon fibre and Kevlar with 65kWh installed capacity (provided by over 5600 lithium-ion 18650 format cylindrical cells) driving two rear-mounted electric motors, the combined output is 450kW and a colossal 950Nm of torque. This enables the Rapide E to reach 100 km/h from standstill in 4.2 seconds, attain an electronically limited top speed of 250 km/h and sprint from 80 to 112 km/h in just 1.5 seconds. According to Aston Martin, these figures are not restricted to a narrow window of battery charge or climatic conditions, instead, the E will deliver this performance consistently and repeatedly.

The automaker also claims the rear-wheel-drive E model, with the twin electric motors driving through a Limited Slip Differential, retains the feel and character of the V12-engined Rapide AMR, thanks to careful attention paid to the tuning of the powertrain and chassis across the driving modes – GT, Sport and Sport + – selected for performance and handling.

Its range of around 320 km under the Worldwide Harmonised Light Vehicle Test Procedure (WLTP) is slightly disappointing when compared to some other EV supercars but the high-voltage battery system, however, enables faster charging – 4 990 km of range per hour, using an 800V outlet delivering 100kW or 3 140 km of range per hour using a typical 400V 50kW charger.

It would seem Aston Martin is not set on competing with the Teslas, Rimacs or other models for EV-literate customers with the Rapide E, but rather will focus on buyers opting for luxury and style over efficiency. The first Aston Martin EV, produced in limited numbers, must be viewed as a test bed for future, more advanced and refined electric vehicles.

In the words of Dr Andy Palmer, President and Group CEO of Aston Martin Lagonda, the Rapide E signals Aston Martin’s intent to prepare for the challenge of an environmentally responsible and sustainable future but not “foregoing those unique qualities that define an Aston Martin”. The Rapide E is due to enter production later this year and is available to order now, with prices available on application.