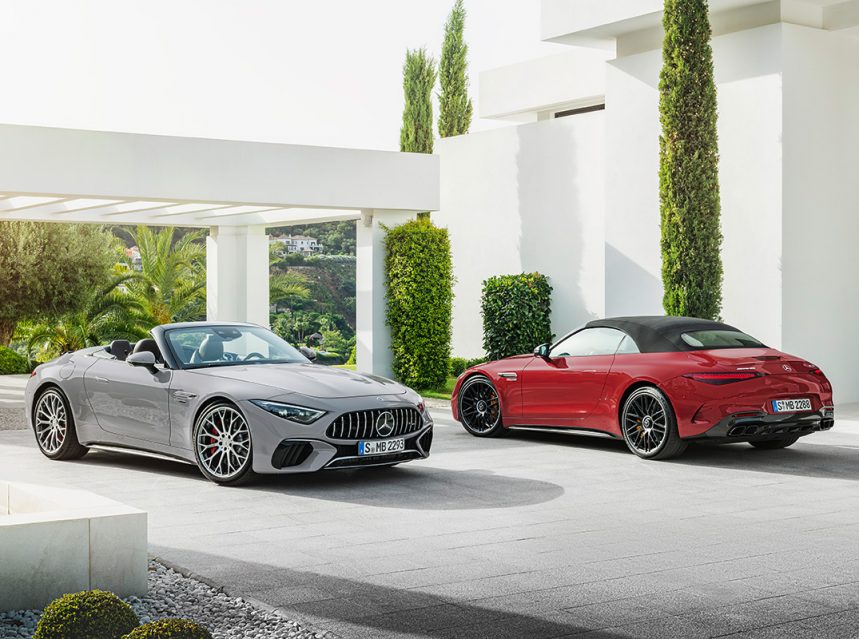 For the first time in its hallowed history of almost seven decades, the legendary SL is now officially badged a Mercedes-AMG – and the rebirth of the icon sees it return to its origin with a classic soft top and sporty character.

When the first SL was unveiled in 1952, followed by the road-going 300 SL “gullwing” production sports car two years later, the AMG tuning company – now the official performance arm of Mercedes-Benz – was nothing more than a vague idea in the minds of founders Hans Werner Aufrecht and Erhard Melcher.

In 2005, AMG became a wholly-owned subsidiary of Mercedes-Benz, and five years later, the SLS AMG – the first car entirely developed by AMG – was presented as the heir to the Mercedes-Benz SLR McLaren and spiritual successor to the 300SL Gullwing. Following the SLS AMG and during the tenure of the sixth generation (R231) SL-Class, Mercedes-AMG was tasked with the overall clean-sheet development of the new SL (R232).

The new, seventh-generation SL, available only as an AMG model, is the first to have a standard 2+2 seating configuration.

The exterior design creates a repositioning of the icon and signifies a return to its sporty roots – as exemplified by the power bulges on the long bonnet (reminiscent of the original SL generation), the short overhangs, and the sharply raked windscreen. Doing away with the Vario-roof hardtop of the preceding three generations, the soft top is seamlessly integrated into the overall design. The soft top weighs 21 kg less than a vario-roof, with a lower centre of gravity, and opens and closes in about 15 seconds.

The luxuriously appointed interior transports SL tradition into the modern era with a roomier 2+2 layout and minimalist design, culminating in a “hyper analogue” layout – a combination of analogue and digital geometry. This is exemplified by the digital 12.3” instrument cluster integrated into a three-dimensional visor (to reduce glare and improve legibility) and a tilting 11.9″ touchscreen panel. The latest generation MBUX system offers state-of-the-art functionality and AMG-specific content in five display styles.

The even aerobalance ensures consistency in driving characteristics, regardless of whether the electric soft top is up or down. A range of aero-optimised 19”, 20” or 21” alloy wheels further reduces drag and balances weight distribution.

Two output levels of the AMG 4.0-litre V8 biturbo engine will be available at market launch, with an AMG E-Performance hybrid drivetrain to follow later. And for the first time in its almost 70-year history, the SL is now available with 4Matic+ all-wheel-drive technology and active rear-axle steering as standard.

Numerous equipment options offer a diverse range of individualisation, ranging from sporty-dynamic to luxurious-elegant. Specification and pricing for South Africa have not yet been announced, but, in all likelihood, the new 2+2 roadster will be launched locally in the second quarter of 2022.