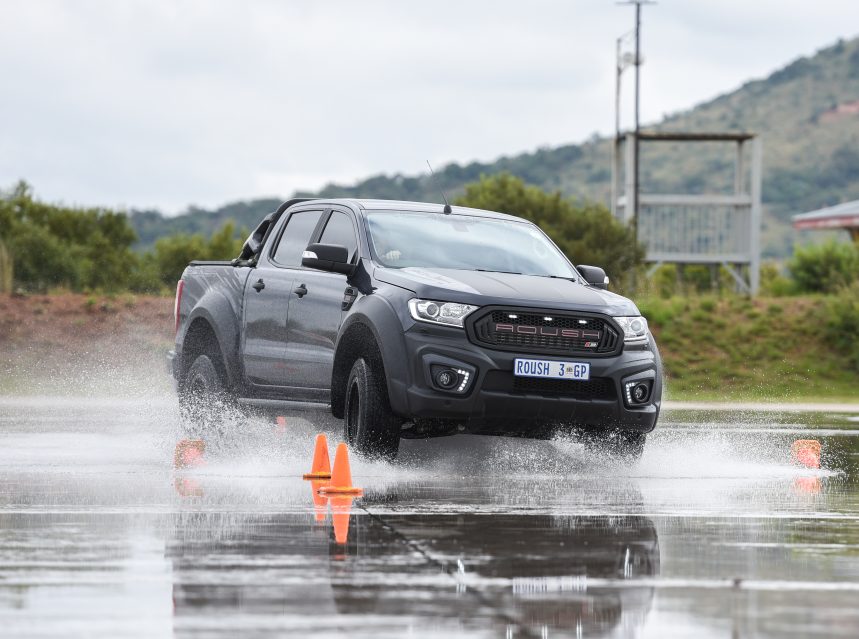 The near two-year marriage between horsepower manufacturing companies, Ford Performance Centre in Centurion and American-based ROUSH Performance has already delivered some special vehicles. However, never has anything tugged at the heartstrings of South Africans quite as much as its latest creation: the ROUSH Ranger. DEON VAN DER WALT drove it at its launch to find out if it is Ford-tough in-between all its layers of muscle.

Fact: South Africans love bakkies. It is also a fact that our bakkie-mad countrymen love to add visual enhancements, all in the name of added toughness. And, as far as the toughness factor of the ROUSH Ranger (pronounced Rowsh) is concerned, it gets a check in that box.

The boffins of speed did not settle on offering South Africans a single model of the bad-tempered Ranger. Instead, Ranger owners can opt for any one of three upgrade packs that include visual and mechanical enhancements. 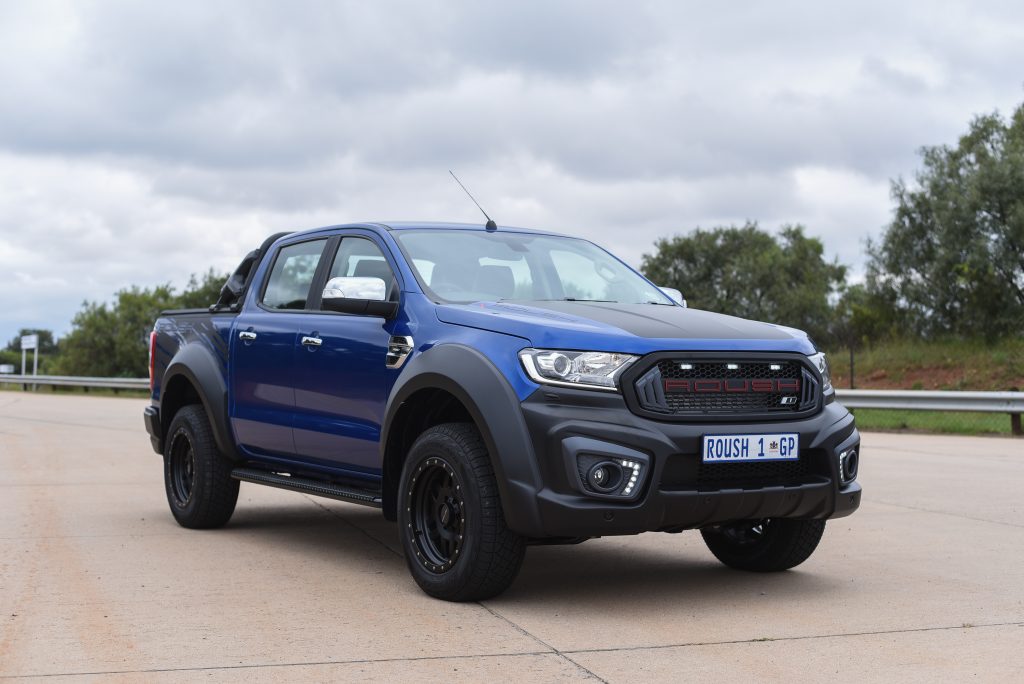 Stage one, also referred to as RS1, primarily offers drivers of new Ranger models a dramatic visual upgrade. This includes a body-kit with flared wheel arches, dual exhausts, and tailgate details with a ROUSH-branded front-bumper and grille treatment.

Other masculine touches include black 18” wheels, a Raptor-inspired splash on the back and a ROUSH banner on the windscreen. The basic RS1 treatment costs R135,000 and includes fitment.

There are also a few essential performance add-ons available for the RS1. The first level includes Unichip software with a hybrid turbo, while the second level also offers these components, but with an upgrade on the turbo and the addition of an enhanced intercooler. 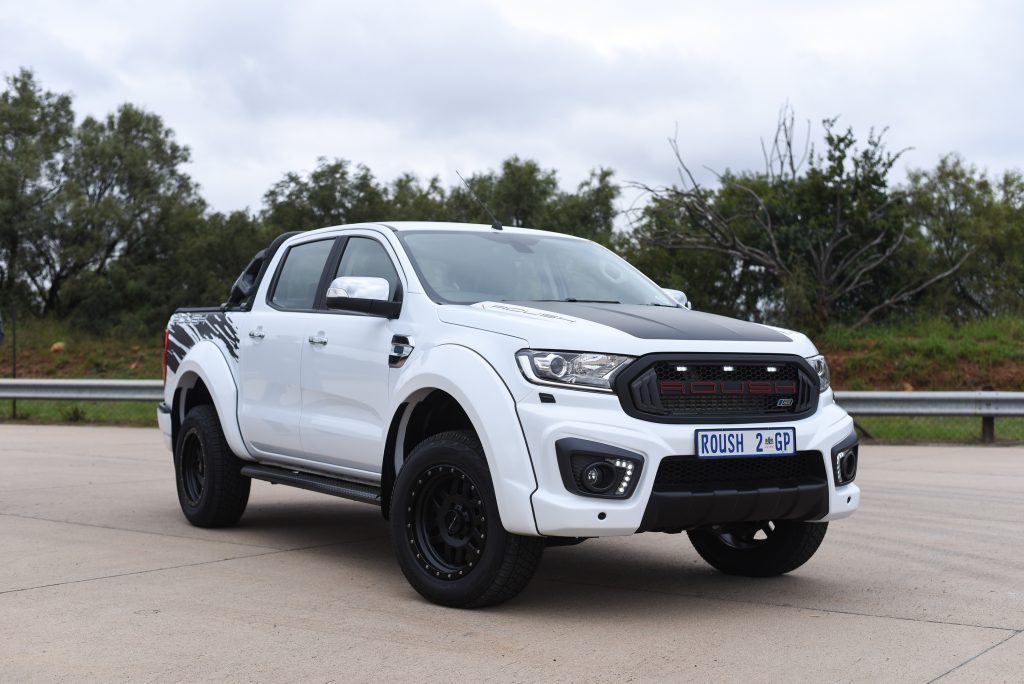 The RS2 offers much of the same visual enhancements and comes with a reasonably comprehensive suite of performance increases. This includes a performance intercooler, high-flow exhaust system, five pre-mapped software settings, a turbo upgrade and a Ford Protect 3-year/60,000 km drivetrain warranty.

The list of upgrades should add an estimated 16% more power to the engine with a total of around 170 kW that is quoted off the flywheel.

You will have to fork out R185,000 for the RS2 upgrade, though, but it also comes standard with a ROUSH handling pack that features both the Pedders TrakRider suspension and Pedders brakes. 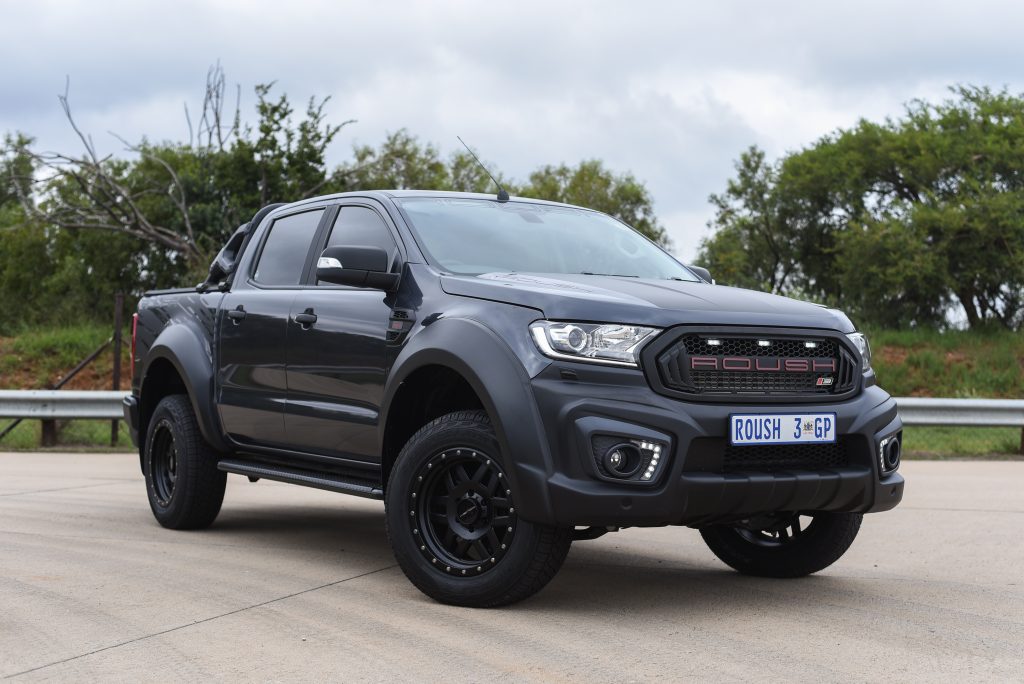 At the top of the performance ladder, it is a case of ditto as most enhancements are reasonably similar, but also considerably better in every way.

For starters, the RS3 is estimated to squeeze around 30% more power from the Ranger’s engine thanks to an upgrade to most of the performance parts found on the RS2.

The top-tier Ranger upgrade, which costs R245,000 also features a full ROUSH-styled leather interior, while the only cabin upgrades on both the RS1 and RS2 are extended to embroidered headrests and new mats on the floor. 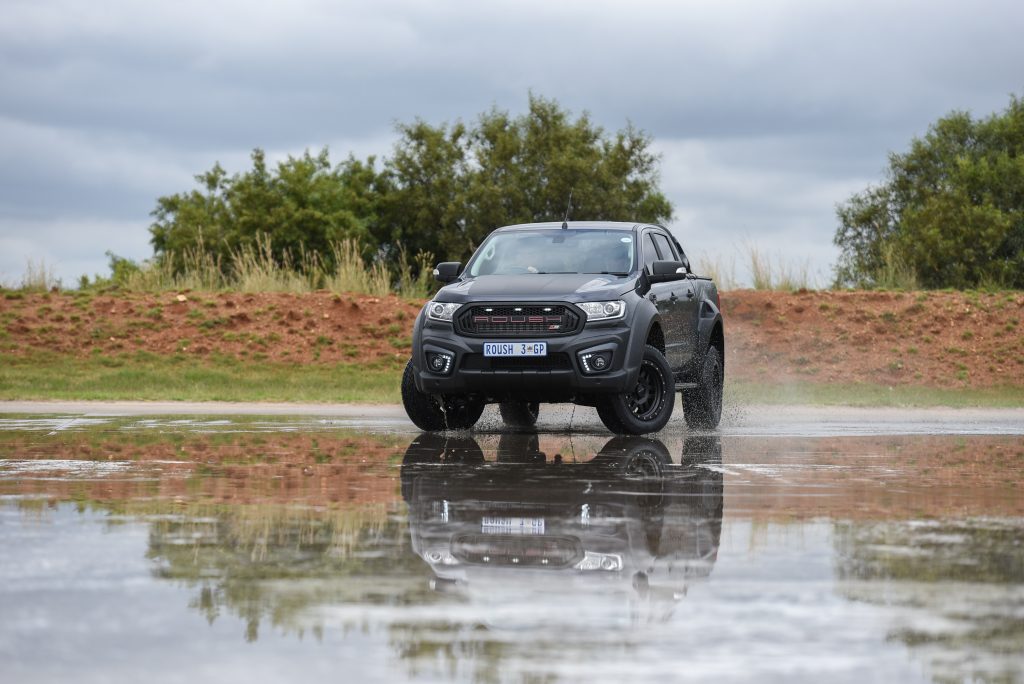 From driving the stage two and three ROUSH Rangers, it’s clear that it still feels exactly like a Ford, only better. The 3.2-litre engine still has that creamy diesel soundtrack, but with an added urgency from the accelerator pedal in the RS2 and RS3 derivatives.

While it doesn’t feel that much speedier than the standard bakkie, once climbing through the gears, it is the sharp throttle response off the line that gets an approving nod.

Its trump card, though, as local media found out on Gerotek’s skidpan, is the massive improvement in handling that the combination of the new tyres and the Pedders brakes and suspension offers.

It is easy to forget that you are driving a bakkie, especially when switching off the traction control. Navigating (a conservative word for power sliding in this context) around the cones on the skidpan, none of the cumbersome understeer during oversteer handling quirks, usually associated with these heavy vehicles, are present.

Instead, it is quite composed, even at sideways angles, and willing to flick around the cones in a reasonably undramatic fashion. And when the need to stop arises, the brakes take care of that too, time after time.

While all the add-on muscle adds to the already tough persona of the Ranger, that exterior hardiness is arguably also the most prominent selling point of the ROUSH Ranger. In essence, all the upgrade packs are good value, especially when you consider that it includes all fitment costs and mechanical upgrades that are covered by Ford South Africa.

However, it would be somewhat difficult to justify spending R245,000 on the RS3, and while the RS2 looks and feels like overall better value-for-money, we would opt for the RS1 with a handling pack — if only that were possible…