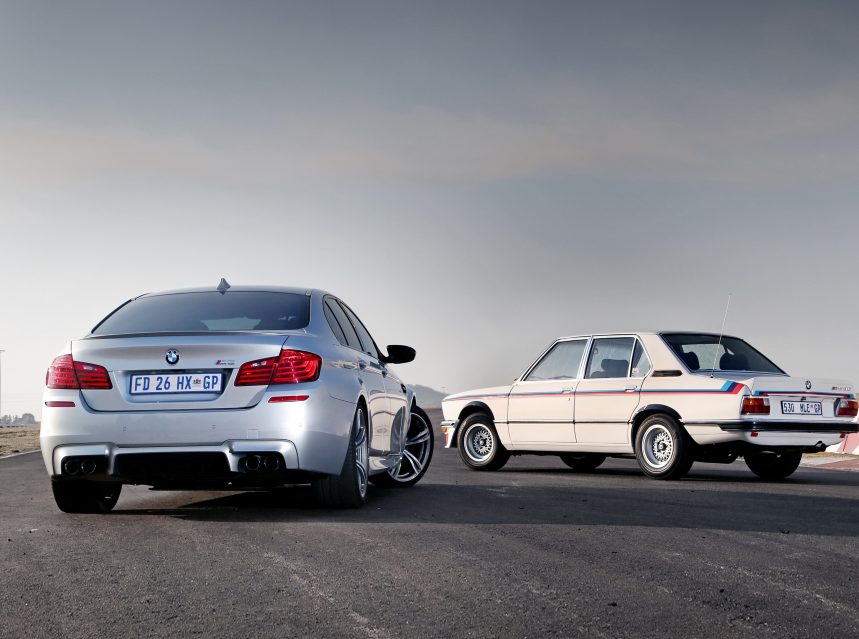 An exclusive and very rare 5 Series performance model is conspicuous in its absence from BMW’s centenary celebrations this year.

A pity, really, as this uniquely South African car, developed by BMW Motorsport and built locally 40 years ago, was for all intents and purposes the first M-car ever – and needs to be recognised as such.

Yet, its role in establishing the M-brand is very much downplayed.

Unofficially named the 530MLE (for Motorsport Limited Edition) this special, lightweight E12 5 Series sedan preceded by four years the BMW M1 supercar – universally regarded as the first M-car – and also the M535i, built from 1980 to 1981 to coincide with BMW’s F1 racing programme.

The MLE was a South African initiative, and while BMW Motorsport (established in 1972) initially developed the race derivative, it was subsequently built locally, with road versions selling from 1976 to 1977.

BMW’s roots in South Africa date back to the late 1960s when Praetor Monteerders in Pretoria assembled Glas based BMW models (BMW purchased Glas in 1967) such as the 1800 and 2000 GL, 1804 and 2004 (as well as the interesting BMW Cheetah for the erstwhile Rhodesia).

In 1975, an experimental 528 manual was shown to the media, and it immediately drew attention. The sporty 5 Series derivative was seen as a model which could drive the fledgling German brand’s sales in the country.

It was also viewed as the perfect vehicle to establish BMW in local motor sport, and negotiations were entered into with BMW Motorsport in Germany to develop a modified production racer.

Under the legendary Jochen Neerpasch, with technical direction by Peter Stark, a concept car based on the 525 was built, and the brothers Schnitzer in Freilassing finalised the development work.

The first race car was prepared in Germany, and the second in South Africa – both set to compete in the top local modified production saloon car racing series.

However, in order to be eligible for the series, BMW had to build at least 100 road-going versions, now unofficially called the 530 Motorsport Limited Edition, and produce proof of sales of these cars to private buyers.

The homologated road cars (perhaps unsurprisingly) proved very popular. Even at R10,595 – a staggering amount in those days – they were so well received that BMW SA produced an additional batch to satisfy demand.

With a deep front air dam and boot lid spoiler made of fibreglass, plus extended wheel arches (the early spats were colour coded, later ones were left black) the 530 MLE looked very different from any other BMW model offered back then.

It was also one of only a few road cars offered standard with BMW’s iconic blue, purple, and red tricolour stripe motorsport livery (the others being the 2002 Turbo of 1973 and 1974, and the 3.0CSL), and certainly the only 5 Series model.

In order to save weight, the MLE models’ bodies were fabricated using lighter gage steel (although according to some reports this was only the case with the first batch produced), and holes were punched in body panels, while the boot lid hinges and the clutch pedal were drilled.

Thinner glass was used for the side windows, the battery was moved to the boot, and the base of the rear bench seat was made of foam.

The first batch of 110 was only available in Ice White, while the next 108 cars were painted in Platinum and Sapphire Blue. Out of this batch, one car was painted Aztec Green and sported a leather interior, while another had a sunroof.

Under the bonnet nestled a tweaked version of the 2,985 cc, 6-cylinder motor (as used in the 3.0L) with wilder cam, twin-choke Zenith carburettors, huge air filter, competition flywheel, and oil cooler.

In race trim the 530MLE lived up to, and surpassed, all expectations. Producing an impressive 202kW at 6,750 r/min and 318Nm peak torque at 5,500r/min, and a maximum fifth-gear speed of 235 km/h, the powerful package swept all before it.

With Eddie Keizan and Alain Lavoipierre as initial drivers, the MLEs in BMW Motorsport colours were unchallenged, breaking records and achieving all-conquering success on the country’s race tracks.

With fifteen victories from fifteen consecutive starts, and three consecutive championship titles over a period of two and a half years, Keizan eventually complained that his only competition was his teammate.

However, the competition did catch up in 1978, but by this time BMW had achieved its goal – to establish the marquee as a sporty brand and a serious contender in South African motorsport; a tradition that is still very much alive today.

The BMW M5 Pure Metal Edition, the latest instalment in the local 5 Series M-car tradition, was announced in late 2015 and all 20 examples were sold before they reached local shores.

Based on the “30 Jahre” edition released overseas but not locally, the SA-only Pure Metal Edition is the most powerful series production M5 derivative ever to emerge under the auspices of BMW M GmbH.

Its 4.4-litre V8 engine with M TwinPower Turbo technology delivers 441kW, 29kW more than the standard M5 and 18kW higher than the Competition Package (and the same as the newly released Competition Edition).

This has been achieved through modifications to the engine management system and an increase in charge pressure, gifting the Pure Metal Edition a 0-100km/h time of only 3.9 seconds and a top speed of 305km/h.

Only available with BMW Individual Pure Metal silver metallic paint, the special M5 is bestowed with 20” M double spoke alloy wheels, while inside black full leather M Sport multifunction seats with contrast stitching in Silverstone in the dark aluminium interior are standard, as well as a ‘Pure Metal M5’ plaque with ‘1/20’ inscription.

Standing next to each other on the Zwartkops race circuit, the older MLE looked quite diminutive compared to the new Pure Metal Edition.

It gives one a good perspective on the development of performance sedans over the last 40 years – with ample power while not negating luxury, overshadowing compactness and the need for weight-saving.

Even so, while the smaller MLE weighs a measly 1,233kg, new construction methods and lighter materials made it possible to peg its bigger, more luxurious successor’s weight at 1,870kg – about 640 kg heavier, but with 400 horses more.

Despite its age the MLE is still a very capable vehicle, its smooth straight-six providing a good blend of low-down torque and high-revving performance.

The dogleg first gear of its Getrag 5-speed close ratio ’box takes some time to get used to, and calls for careful cog-swopping, and the unassisted steering, while heavy, still has good feel and accuracy.

A Borg Warner limited slip diff keeps the rear well in check, but even with Bilstein gas shocks, stiffer springs, and anti-roll bars front and rear, the 40 year-old displays a good degree of body-roll in the corners.

The brakes, with vented discs up front, also show their age, grudgingly forcing the special car to standstill.

By contrast, it is all just a little too easy in the Pure Metal Edition.

Immensely powerful the beast may be, but its lethality is neutered by a legion of electronic driver aids. Fortunately, by engaging the bare minimum of nanny systems, the wonderful balance and poise of the most powerful M-car to date is evident.

Around the track the flagship M feels lithe and compact, belying its size, and is a true testimony to the extent of performance car development over the last four decades.

Seen in this context, what was MLE’s contribution within the scope of great BMW cars? Well, it was the first production 5 Series with M mechanicals and cosmetics as standard, and its racing success has never been equalled by any other 5 Series.

It was also BMW’s first sporting 5 Series, ultimately culminating in the M535i four years later. By the end of 1976, the MLE cosmetics were optionally available on the equally rare German-only 533i.

In addition, while the M emblem was first officially used on the M1, the SA-only 530 used the prior version of what was to become BMW M division’s logo.

With only about nine still in existence, it is equally rare, and will likely only gain in value.

Whether this will hold true for the Pure Metal Edition remains to be seen, as its collectability has been watered down by a plethora of other limited run 441kW F10 models (such as the Competition Edition and the US-only Pure Metal Silver Edition).