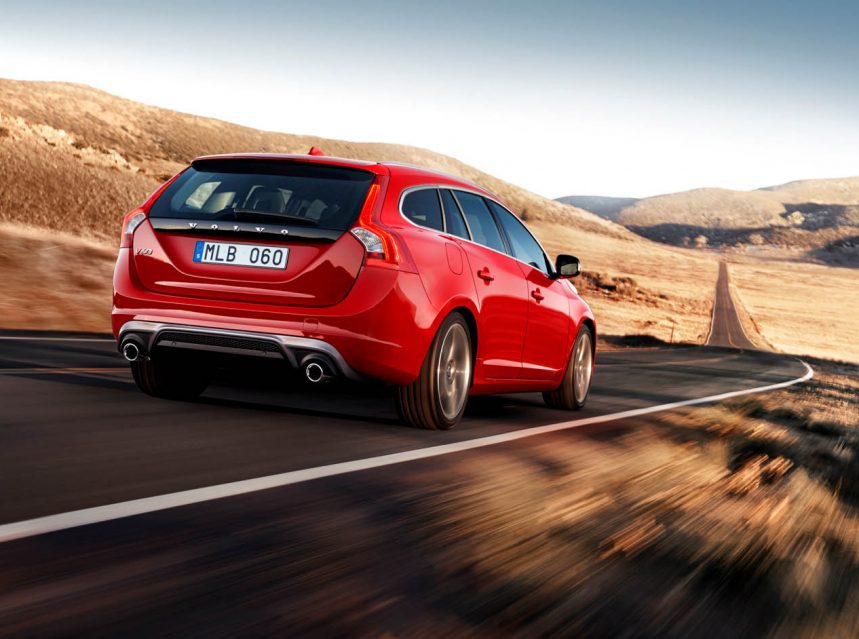 In the battle of wills between the Volvo S60 and V60 there can be only one winner, as Liezl Thom discovered.

With its V60 and S60 models, Swedish premium automaker, Volvo, caters for both families and executives alike. The V60 is a premium sportswagon perfect for a weekend getaway for the whole family, while the S60 is compact and powerful – a stylish way to move around town.

As I was waiting for the Volvo S60 D4 test car to be delivered, I was expecting a boxy vehicle with square corners. I was pleasantly surprised when the sleek R-Design, in Passion Red, pulled up – it looked nothing like the rectangular box I had expected.

Courtesy of its R-Design treatment, the twin exhausts, low profile 18” wheels and brushed aluminium mirrors give the vehicle a sporty edge – and the driver a little inkling of its performance – as do the silver gearshift paddles behind the steering wheel.

The low roofline makes it a bit of a challenge to get into the S60, especially if you’re negotiating the aperture in high heels, but once inside the car, the soft leather seats seem to perfectly mould themselves to your back, giving sturdy, yet comfortable support.

At first glance, the simple yet elegant design of the dashboard is the epitome of Swedish elegance, with the radio/media/handsfree dialling controls on the falling waterfall centre console a little overwhelming at first, but I became used to their functionality quite easily. Inside the car is practical, with large cup holders, generous door bins and a lidded cubby with a USB port for charging your phone. There is ample legroom in the back, but the middle seat is only suitable for a child or small adult.

The car’s sporty looks and styling is echoed in the suspension, with the ride becoming quite hard, especially on shorter drives, but not to the extent that it I would consider it a deal breaker.

Perhaps the single biggest drawback of the S60 for me is its limited boot space. It almost looks as if the addition of the spare wheel was an afterthought, as the lid makes the boot – which admittedly is quite deep – quite shallow.

What it lacks in boot space, it certainly makes up for in performance. The diesel engine has a delightful roar, a powerful and willing engine and super responsive steering. It is a little bit sluggish after the stop/start technology disengages but it really excels on the open road, with smooth acceleration and superb handling. This is where the digital speedometer comes in really handy – it leaves you under no illusion as to exactly how fast you are driving.

As much as I loved driving the S60 however, I would not consider buying it as a family car largely because of the limited boot space.

As with the S60, the R-Design package gives the V60 a sporty look and feel, making it the best-looking estate vehicle on the road.

The interior is styled exactly the same as the S60. Both cars also feature a selectable digital speed indicator on the central infotainment screen – perhaps not the greatest idea that the back seat driver behind you can now also help keep an eye on the pace at which you’re driving.

An extra set of eyes could come in handy though if you are prone to keeping yours on the road instead of the speedometer, because the V60 accelerates so smoothly and quietly, that you really have to concentrate to keep within the legal speed range.

The car’s grip on the road is absolutely solid and it handles well. I’m not certain whether it is because the test car was petrol-, rather than diesel-fuelled, but the stop/start function in the V60 springs into action with less lag than I detected on the diesel-powered S60.

The V60’s suspension is also slightly softer than its more compact sibling’s but the biggest difference between the two (apart from the engines) is the boot size. Although the V60 can be considered on the small size for a station wagon, it has ample boot space – enough for the kids’ sporting equipment or a big haul at the grocery store.

With the T5’s smooth, almost inaudible engine, I missed the S60’s guttural beat, which contributed significantly to the driving experience – but if I have to make an honest choice between the two, I would definitely choose the V60.