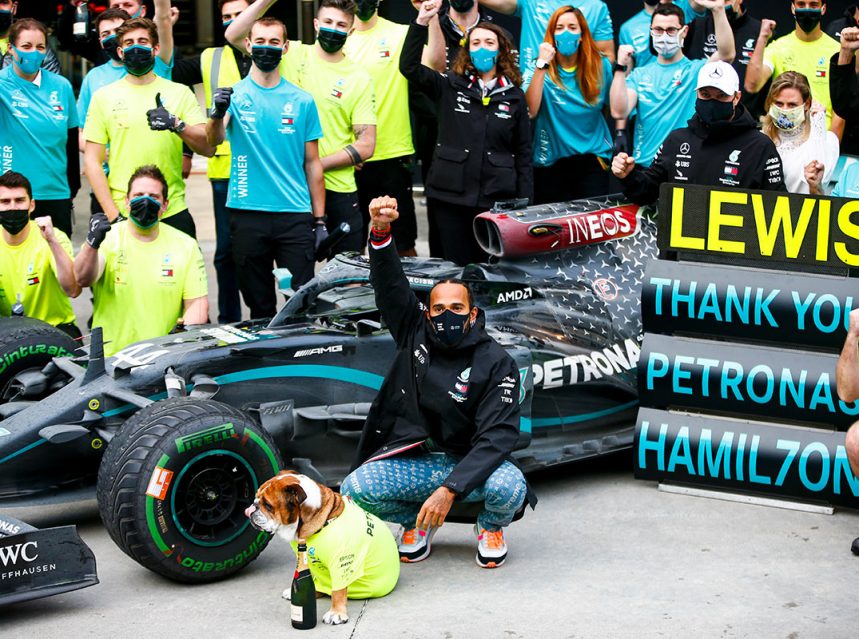 By the time you read this, the Bahrain Grand Prix would have reached its conclusion. More importantly, though, at the time of writing, the F1 World Championship had reached its climax for one man – Lewis Hamilton – who is, again, Formula One World Champion.

However, before you scoff and declare the obvious statement of “again!” – it has become a familiar ballad by now – it’s important to note that this man has now officially equalled Michael Schumacher’s World Championship title tally of seven. There’s certainly a lot of debate going around public comment forums as to whether he’s the greatest F1 driver of all time, but whether you love or loathe the driver of car number 44, statistically-speaking his legitimacy to F1 immortality cannot be denied.

Initially, as qualifying for the Turkish Grand Prix drew to a close, it didn’t look all that promising for the championship contender. Right at the head of the pack was a pink Racing Point Mercedes belonging to Lance Stroll, while Lewis’ teammate, Sergio Perez, locked down the third starting position. The two Red Bulls were parked on the second and fourth grid positions, while the Renault of Daniel Ricciardo, also a car that has shown promising pace during the second half of the season, was set to start in fifth, one position ahead of Hamilton’s Merc that, if the timing sheets are to be believed, really didn’t favour Istanbul Park.

But the track was wet when the lights went out, and the only certainty around a damp track is uncertainty. Esteban Ocon and Valtteri Bottas, also the number one complication in Hamilton’s quest for gold, already spun out in the first corner and, while the championship leader survived the treacherous first few corners, the Mercedes-AMG simply didn’t have competitive grip.

At the front, it was unfamiliar territory for the two Racing Points that led the race. At the same time, Verstappen, who was hoping to overtake Perez for the second position, relied too much on the outside curb of the fast sweep resulting in the Red Bull Honda’s rear-end overtaking him. Alex Albon also lost control of his Red Bull enabling Hamilton who, while not setting particularly fast lap times, proved to be incredibly consistent as he grabbed the third spot. Then, the pit-stop and tyre strategy narrative played its hand, and out of nowhere, Hamilton took the lead from a struggling Sergio Perez.

With Lewis Hamilton taking the chequered flag, it looked like the podium would once again elude Sebastian Vettel. Still, a tyre lock-up from his teammate, who looked set to take second place, allowed Perez and the German to slip through, securing second and third place respectively – also making this the first podium for the former world champion in 2020.

The Turkish Grand Prix seemed to be just another metaphor for the seven-time Formula One World Champion: “success during the worst turbulence”. The first time Hamilton drove a car of any shape or form, a Formula Renault, he crashed on only his third lap. The following year, he took the title.

In 2007, McLaren boss, Ron Dennis, appointed then-rookie Hamilton as the second driver alongside Fernando Alonso. But things between the two drivers quickly turned sour, leading to one of the best-documented teammate rivalries in F1 history. In 2008, he won his first of many F1 World Championships. He left McLaren for Mercedes in 2013, a team that, at the time, proved inefficient in the ways of winning – the criticism from naysayers (and admittedly, myself as well) was deafening, yet, in 2014, he once again proved to be the best driver on the grid. While many credited Niki Lauda’s input for the Benz’ winning ways, it needed a driver with outright pace and discipline – And Hamilton was that driver.

Lewis Hamilton’s father recently revealed that the world champion nearly gave up a promising career in karting to lead the life of a normal teenager. He didn’t, though, and despite many a setback throughout his racing career, he showed tenacity, discipline and, most importantly, a competitive spirit where nothing but first was good enough.

Love him, or loathe his oftentimes transparent diplomacy, no one can deny Lewis Hamilton the title of modern F1’s greatest driver – if not the greatest Grand Prix driver of all time. And if the reports of his current contract negotiations serve as any indicator, he won’t be stopping any time soon.