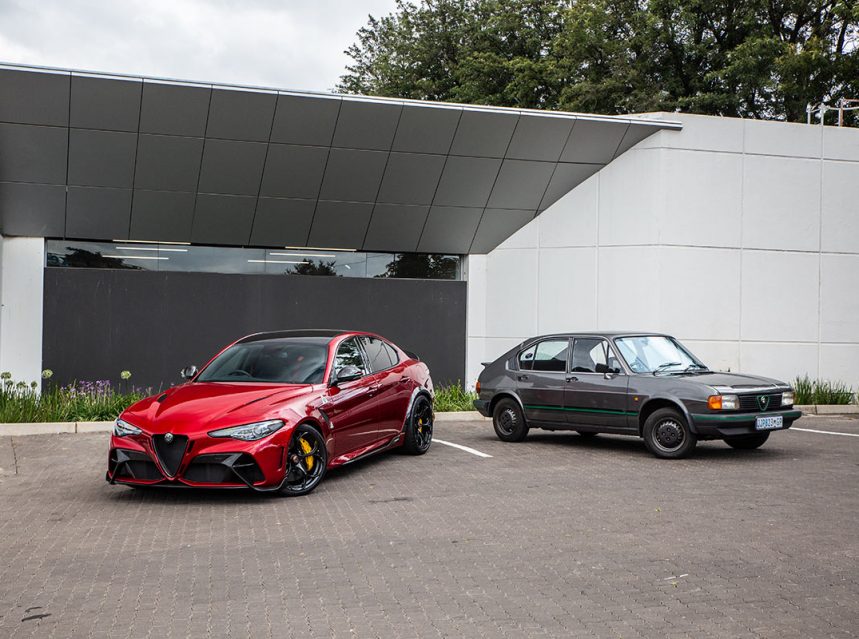 Following an absence of nearly 20 years, the hallowed GTA acronym has returned to local shores, now adorning the lascivious rear of the ultimate Giulia sedan. But did you know South Africa once produced a unique, lesser-known GTA model? With that in mind, we couldn’t resist arranging a historic meeting.

The last time I experienced the legendary set of initials garlanding the fastest of fast Alfas was courtesy of a red 147 GTA. And while the 184 kW hot hatch had its flaws (lots of torque steer and a bumpy ride), I loved it… until its untimely demise; T-boned by a stop-sign skipping idiot (no, I wasn’t driving).

Considering what GTA stands for (Gran Turismo Alleggerita, with **alleggerita** the Italian term for “lightened”), one could argue that the 147 GTA (and its 156 GTA contemporary) weren’t “real” GTAs as, while they were powerful and quick, and possessed good driving dynamics, they were not lightened in any way, and were heavier than their lesser siblings.

Now, the iconic moniker is back, and on another level altogether, as this time the Alfa Romeo engineers have striven not only to improve aerodynamics and handling but, above all, to reduce the weight of the new Giulia GTA – the same guidelines followed for the 1965 Giulia Sprint GTA.

The original GTA had body panels made from aluminium, and it weighed only 745 kg compared to the 950 kg of the regular mass-produced version. Its 1,570 cc twin-cam engine, already delivering a healthy 86 kW in road trim, was also fettled by Autodelta to release a heady 127 kW.

Unsurprisingly, competition success for the sporty coupé was vast and immediate, with three consecutive European Touring Car Championships, tens of national championships and hundreds of individual races in every part of the world, assuring the GTA name (and related GTAm) became naturally associated with Alfa Romeo’s sportiest models.

We featured the current Giulia Quadrifoglio (then still known as the QV Race Edition) five years ago, together with the unique locally developed 1600 Rallye version of the first Giulia, the Tipo 105 Berlina (Driven, April 2017). Back then, we described the Q as pretty mean looking, but seeing it parked next to the new GTA in the SMH Group dealership in Bryanston, Johannesburg, it appeared pretty tame.

The GTA – with its massive 20” centre-lock wheels (used for the first time on a sedan), widened front and rear tracks (by 50 mm), carbon fibre Sauber Aerokit (courtesy of Sauber Engineering) side skirts, specific rear spoiler and rear diffuser, and active front splitter – appeared even more raw and visceral in real life than it had on images of it. And it was magnificent to look at.

The active aerodynamics, developed with technical know-how straight from Formula 1, to increase downforce (on the GTAm, it is even more radical, with a large front splitter and a carbon rear wing), and the centrally-placed titanium Akrapovič exhaust system integrated into the carbon fibre rear diffuser, radiates purpose and intent – as a real GTA should.

Under guidelines followed for the original GTA, lightweight materials such as carbon fibre for the driveshaft, hood, roof, front bumper, front wheel arches, rear wheel arch inserts, and the shell of the sport seats (with six-point Sabelt safety belts) were used to reduce weight by 100 kg.

Lightweight aluminium in the engine, doors and suspension systems, and other composite materials such as Lexan – a unique polycarbonate resin used in motorsports – in the side and rear window frames, further reduce mass, resulting in a weight set of around 1,580 kg.

New matte carbon inserts endow the interior with a distinctive technical and aesthetic elegance. Alcantara has been used on the dashboard, door panels, glove compartment, side pillars and central seat trim. It is used even more extensively on the race-ready GTAm, which features an interior with a roll bar and no door panels or rear seats.

Due to meticulous calibration work performed on the aluminium engine and to optimise the Akrapovič exhaust system, the powerful 2.9-litre V6 bi-turbo in the GTA now unleashes 390 kW (compared to 375 kW in the Quadrifoglio) resulting in an excellent power-to-weight ratio of 246 kW/ton or 4.1 kg/kW.

This endows the GTA with exemplary performance: acceleration from zero to 100 km/h stops the chronometer at just 3.6 seconds, thanks to Launch Control. It tops out at 390 km/h. Unfortunately, this experience is reserved for a select few, as only 500 units were built – seven (five GTAs and two GTAms) found their way here – and all have already been sold.

A GTA version of the Tipo 105 Giulia Berlina, introduced 60 years ago in June 1962, was never introduced here. Still, a Rallye version – probably the fastest of its kind in the world – was built locally in 1972. This special version, celebrating its golden anniversary this year, was developed following the rising local interest in Alfa Romeo cars.

Noting the brand’s growing market share, Alfa Romeo’s management in Turin decided to set up a dedicated factory in South Africa. Construction of the plant near Brits was completed in 1973, and the first Alfettas off the line were soon followed by the small Alfasud – launched internationally at the end of 1971.

As with the Giulia, Alfa Romeo South Africa introduced a special version, the Alfasud 1300 Rally, in 1977 and 1978. This model was only available in red or white, with a satin black bonnet, and was the only local Alfasud model sold with the front lights of the (European) Alfasud ti series I.

With twin 44 IDF Weber carburettors and an Autodelta induction kit, engine power was rated at 64 kW and 119 Nm (compared to 56 kW and 103 Nm for the regular ’Sud). This special derivative served as a precursor to what would follow.

From June 1981, the five-door Alfasud series III produced in Brits was renamed the Alfa Romeo Export, and it resembled the overseas 1.5 Quadrifoglio Oro. Then, as a runout edition after the first Alfa 33s were launched here in 1984, Alfa Romeo SA created a special export variant named the GTA.

One can only wonder how they ever received permission for this, as nothing made it deserving of the revered GTA badge. Yet, the model, only available in a curious brown metallic colour with a green Scudetto, a green line running around the waistline and a unique rear spoiler developed by Autodelta (strangely resembling the one on the new Giulia GTA), received the subtype number 30146.

It was powered by the strongest 1.5-litre flat-four engine available, the 77 kW version used in the European Alfasud 1.5 Ti QV, giving it a top speed of 183 km/h in fifth gear. Only 50 were built, and according to sources, only seven have survived, with most of them now in overseas collections.

With the help of the Alfa Romeo Owners Association of South Africa (AROASA), we were lucky enough to track down the last but one Alfasud Export GTA in the country and immediately set out to arrange a meeting between the nearly forgotten local GTA and its highly valued ultra-modern namesake.

Gauteng car dealer Charles Thomas brought the ’Sud to the Bryanston dealership, and the raspy, sharp engine note of its Boxer engine brought back memories of the Alfasuds racing in local Group N races, with their natural nose-high attitude while engaging the corners.

The ‘Sud, proudly wearing the green four-leaf clover, is entirely original from its exclusive green and black patterned upholstery, small sport leather steering wheel, and faux wood door panels and gear knob, to its darkened Campagnolo wheels, and it looked diminutive parked next to the bulging Type 952 Giulia GTA.

Its engine note also paled into insignificance against the reverberating growling, grumbling, and grinding noises of the Giulia’s titanium Akrapovič system. Changing to a compelling snarl as the revs rise, it has a lot of soul – and it suits the GTA’s hardcore character and standout exterior to a tee.

Even so, in our limited time with the GTA, it was clear the whole car is more focused, edgy and tense than the QV, more tuned in, and ready to pounce. One can sense this brute is different as soon as you slide into the carbon sport seat and turn the key.

Even with new springs, shocks, and bushings, its ride isn’t bruising hard, and there still is an inkling of body roll, but the grip from those massive tyres is prodigious. Also, the GTA does feel quicker, with more mid-range torque from the flexible engine, giving it a mighty shove just when needed.

It was fun bringing together this odd pair – the one a somewhat disregarded, overlooked and perhaps derided member of a noble family, the other the new crown prince, a proud and worthy successor to the original, the creator of the GTA realm.

The new Giulia GTA is Alfa Romeo’s ultimate expression of sportiness. Magnificent to look at, it can also unleash impressive power on the road, yet it is also a veritable supercar for everyday use. Unfortunately, its exclusivity (with a price tag to match) has already transported it to the hallowed halls of automotive collectors’ pieces.

Our thanks to Paul Williams from AROASA and Charles Thomas for their assistance with the Alfa Romeo Alfasud Export GTA, and Dean Sheckleton from the SMH Group dealership in Bryanston, Johannesburg, for allowing us access to the Alfa Romeo Giulia GTA.