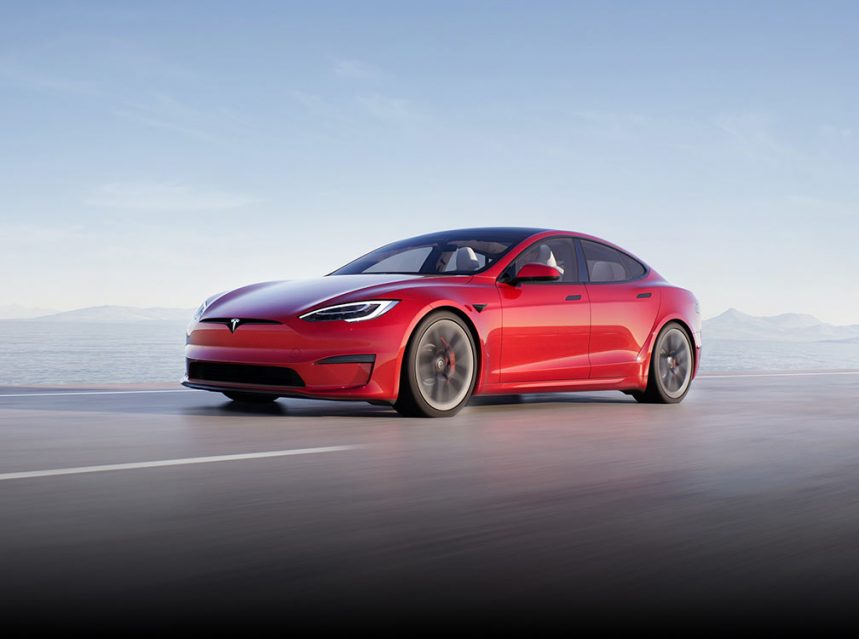 Every month, we recap the latest electric vehicle news as the race is on to embrace all things electric in the motoring industry.

The best car ever built just got a lot better. During Tesla’s most recent earnings call, CEO Elon Musk announced the rollout of the company’s highly anticipated refreshed Model S and Model X models. Musk indicated that the new Model S would be the first to ship, starting end of February 2021, with the new Model X to follow later.

The new Model S is available in three derivatives:

All three derivatives come fully specced, with optional extras limited to exterior and interior colour options, wheels, and Full Self Driving (not to be confused with Autopilot, Tesla’s proprietary advanced driver assist system).

While the exterior showcases some subtle refinements, like a wider rear stance and rear diffuser, the interior has undergone a stunning overhaul. Most noticeable is the new horizontal centre screen and the radical new yoke steering wheel, although the standard round steering wheel is still available. In addition, rear-seat passengers now have an 8” screen that offers the same infotainment and gaming functions as the main screen, and it even works with wireless gaming controllers.

Musk indicated that Tesla will have an official reveal at a later date, after which we will present you with an in-depth article on the world’s fastest accelerating car ever, which just happens to be a luxury family sedan.

Following the launch of the stunning Audi e-tron GT, and buoyed by the sales success of the Audi e-tron SUV and Sportback in Europe, Audi is now showing more confidence in making a quicker than anticipated transition to electric mobility.

According to German publication Manager Magazin, Audi CEO Markus Duesmann has all but given an end date for the Audi A4, A6, and A8 internal combustion model production. Plug-in hybrid models may also be off the table as Audi begins to execute an exit plan from internal combustion engine models to all-electric models like the Audi e-tron SUV, Sportback and GT. While new versions of the A4 and A6 will be launched again in the next lifetime cycle, starting in 2023, with electric variants set to follow shortly thereafter, this looks to be the final lifecycle for Audi’s mid-range internal combustion engine models, which should come to an end before 2030.

Earlier last month, Duesmann expressed similar sentiments to German business paper Wirtschaftswoche, confirming that Audi is working on a concrete timetable for phasing out the internal combustion engine “in the next 10, maybe 15 years”.

With Audi following Tesla’s lead by electrifying its more expensive top-end models first, the Audi A8 may well have its final refresh at the end of 2021 before being replaced by an even more compelling all-electric model. Developed under Audi’s Artemis project, a new such model would be called neither A, nor Q, and it is not clear that Audi will continue with its e-tron naming convention.

If the new Audi e-tron GT is anything to go by, Audi seems to be in efficient hands under the leadership of Duesmann and ready to maintain its Vorsprung Durch Technik in the era of electric mobility.

After nearly a year of record sales, the French EV market slowed down in January, with a decline of 1% year on year. Even so, the EV market once again outperformed the overall auto market that was down 6% year-on-year, with EVs increasing market share to 12%, up from 11% in 2020.

However, before the Peugeot fans get too excited, it must be noted that Renault went all out in December to secure the Renault Zoe’s legacy as the best-selling EV in Europe. On the other hand, Peugeot had a relatively lacklustre December as the PSA group had already complied with the EU 2020 emission quotas entering the last month of the year. As a result, Peugeot was able to defer some of its December sales to January and include those in its 2021 quotas.

We expect to see the Renault Zoe reclaim its position at the top in February and more than likely remain there for the entire year.

In recent years, Volkswagen has flooded the newswires with one concept vehicle after another, including a few very compelling concepts like the ID.Buzz, ID.Roomzz and ID.Crozz. Since then, Volkswagen has executed its initial ID concept with the VW ID.3, a five-door hatchback, and the VW ID.4, a compact SUV. Next in line is the VW ID.5, as confirmed by Ralf Brandstätter, CEO of the Volkswagen brand, during a recent press conference at Volkswagen’s Zwickau plant, where pre-production models are already rolling off the assembly line.

Spy shots of the ID.5 indicate that it is virtually identical to the ID.4, except for its coupé-like roofline, reminiscent of the ID.Crozz concept car. Built on the same MEB platform as the ID.4, in the same factory, expect to see the same 77 kWh battery, feeding the same 150 kW electric motor driving the rear wheels.

Hopefully, we will get to experience a dual-motor performance version soon, but for now, Volkswagen is remaining mum on the subject of performance EV models. Judging by the ramp up of the ID.4, the ID.5 could go into full production later this year, with sales starting as early as the end of the year. Long before then, though, we will have a full report on the all-new VW ID.5.