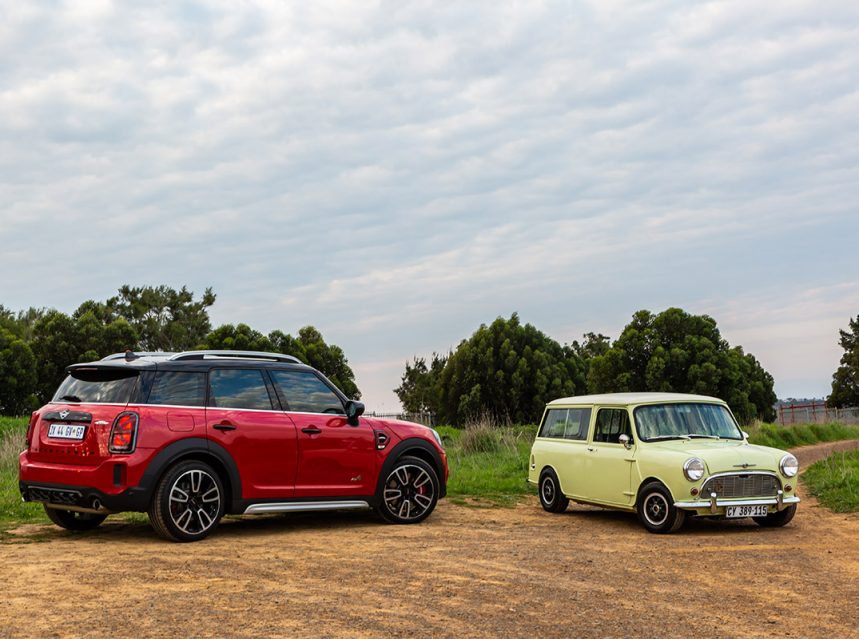 The fastest, most powerful version of the MINI Countryman is now available locally. To celebrate 20 years of the new MINI and 60 years of cooking Coopers, we took the latest John Cooper Works derivative to meet its 60-year-old forebear, assembled locally from 1961.

A year after the debut of the Classic Mini in 1959, British Motor Corporation (BMC) introduced a Mini Van, followed by an estate car with all-around glazing, marketed as the Austin Seven Countryman and the Morris Mini Traveller. In addition, a version was created in 1961 that would contribute to the legendary status of the classic Mini like no other – the Mini Cooper.

Racing car designer John Cooper identified the sporting talent of the classic Mini at an early stage and built a version with engine output increased from 25 to 40 kW and appropriate chassis modifications. Ultimately, power was further enhanced with the Mini Cooper S packing 52 kW.

In South Africa, Minis were being produced at Blackheath in Cape Town as early as December 1959 and by Motor Assemblies (MA) in Durban from 1960 to 1962. The first Countryman/Travellers were assembled here from around June 1961 – exactly 60 years ago.

According to MA records, 156 Countryman/Travellers were built in Durban, all with quite a high level of local content and, like the early UK models, all with internal fuel tanks. A unique feature of the South African Countryman and Travellers was their attractive two-tone colour scheme, with the main body colour ending at the waistline and the upper section and roof generally being white.

This changed in 1966, with the primary body colour now running up to the roof gutters and just the roof being painted a different colour. A mono-tone paint scheme was also available. The interior also had some unique features, such as trim carpet for the door pockets and rear wheel arches to prevent scuffs and scratches. CAR magazine reviewed a locally assembled Austin Countryman in January 1962.

Over time, the South African estates underwent several changes, including the internal fuel tank being replaced with a slightly larger external tank, the filler cap moved to the right-hand side of the car, and the 848 cc engine replaced by the bigger 998 cc engine. The Mk 2 Austin Countryman and Morris Traveller were introduced in 1968.

A year later, the Austin and Morris names were dropped, and the estates were now assembled as the Mini Countryman Mk II. The locally built Countryman was discontinued in August 1971 and replaced by the Clubman Estate. In total, 6,248 Countryman and Traveller estates were sold locally.

The Mini and John Cooper connection is based on a decades-long tradition and a shared passion for individuality and driving pleasure – as again reflected by the latest MINI John Cooper Works Countryman; now endowed with the most powerful engine ever used in a standard MINI.

The B48 2.0-litre four-cylinder mill with TwinPower technology now features a reinforced crankshaft with larger main bearings, new pistons and a lower 9.5:1 compression ratio to take more boost from a larger turbocharger. It now develops a pummelling 225 kW and 450 Nm of torque – 55 kW and 100 Nm up from the 170 kW and 350 Nm in the pre-facelift version.

Transferred to the road via an Aisin eight-speed Steptronic Sport transmission and standard All4 all-wheel drive (with front diff-lock), the substantial power hike is immediately evident. The spontaneous power delivery – accompanied by a roaring note from the sport exhausts with enlarged 95 mm diameter tailpipes – allows the quite weighty JCW Countryman to accelerate from 0 to 100 km/h in only 5.1 seconds and achieve a top speed of 250 km/h.

The pre-facelift F60 JCW Countryman was criticised for its harsh ride on anything but perfectly smooth tarmac, and it is clear BMW took notice, as the latest model – still riding on low-profile 18” rubber – feels much more compliant over rougher surfaces (although our test unit was equipped with optional Adaptive Suspension).

However, the Comfort drive mode is still the best for everyday driving, as Sport is really only suitable for the highway or a racetrack. A Brembo sports disc brake system with Chili Red callipers on the front axle ensures superior stopping performance – indispensable in arresting the momentum of the fast and powerful 2.1-ton super crossover.

Standing next to the very neat 1965 Morris Mini Traveller belonging to Tygerberg Mini aficionado Shawn Bester, the red JCW Countryman looked simply humungous compared to the minute little estate car. In contrast to everything Alec Issigonis envisaged with the original Mini, the latest Countryman is a Mini only in name.

That said, some Mini charisma remains, as emphasised by the redesigned grille and standard LED headlights. The revised rear lights with their Union Jack light design are irresistible eye-catchers, and the headlamp surrounds, rear lights, radiator grille, door handles and model lettering finished in high-gloss black are attractive.

Compared to the Traveller’s sparsely endowed yet practical cabin, the JCW’s interior is simply overwhelming. Against the basic instrumentation of the original, the latest MINI’s dash looks like that of a fighter jet, and the only design elements somewhat reminiscent of the original are the round central console and toggle control switches.

Behind the redesigned multifunction steering wheel, there is now a 5” (optional) digital instrument display, but the characteristic round centre console limits the touchscreen display to only 8.8” (small by modern standards). In its new version, it has a bezel and touch-sensitive control panels with high-gloss Piano Black surfaces, and a new operating system optimises control of vehicle functions, audio programmes, communication, navigation and apps.

In the 1965 Traveller, safety systems are non-existent (no airbags, no power steering, no brake assistance, and only rudimentary aftermarket seatbelts), but the new JCW now also has a Lane Departure Warning system included in the Driving Assistant, as well as Active Cruise Control with a Stop & Go function.

Even so, do not for a moment think the small, 50-plus years old estate car is slow. Oh, no. With a 998 cc BMC A-Series engine driving the front wheels through a four-speed manual box and weighing less than 650 kg, the tiny wagon on period-correct 10” Revolution alloys scooted around the bends with gusto!

With four doors and a large tailgate, five full-size seats, a versatile interior, luggage volume that can be expanded up to 1,390 litres and Golf GTI-crushing performance, the new MINI JCW Countryman is not only suitable for daily commuting but also for meeting comfort demands on longer journeys (so long as you stick to smooth roads).

While one can’t get around the fact that it is, in essence, a BMW X2 M35i with a slightly bigger shell and shares nothing with the original Countryman/Traveller, the latest JCW incarnation is the best yet. It is startlingly quick (for a crossover) and exhilarating to drive.

It is deserving of the JCW badge, and for R878,840 (without options), it doesn’t have many rivals locally. Still, it is more of a fast boulevard cruiser than a real SUV, and if this is what you are looking for, there are many more sedate but more efficient alternatives around.

Our thanks to Shawn Bester from www.bestunefabrication.co.za for supplying his pristine 1965 Morris Mini Traveller for our photoshoot.