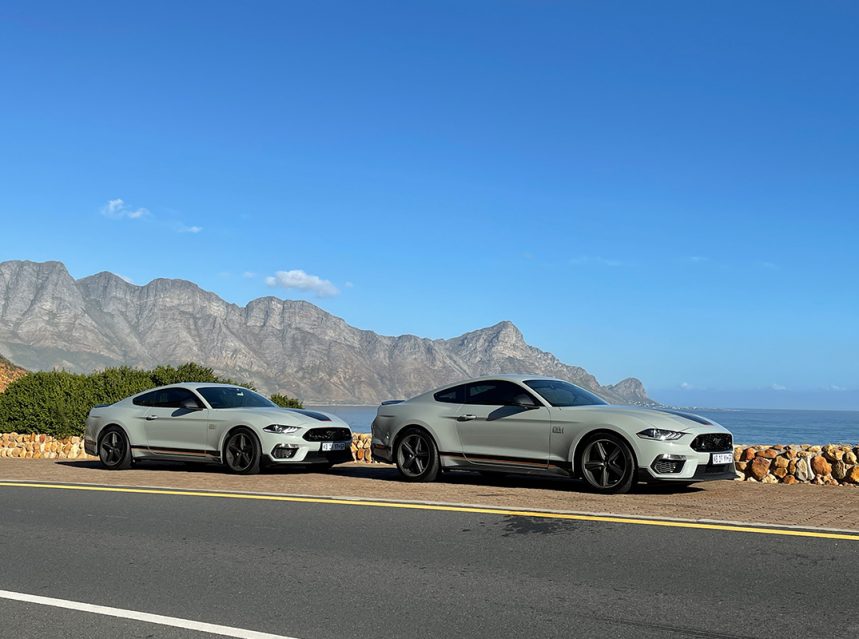 The Ford Mustang has been the world’s best selling sports car for the past two years. Part of the holy trinity of muscle cars, together with the Dodge Challenger and Chevy Camaro, the Mustang has reached iconic status, and perhaps none more so than the Mustang Mach 1.

Due to its immense popularity, Ford occasionally releases a special edition version of the Mustang to satiate its die-hard fans. Enter the Mach 1 – a nameplate that first made its appearance on a Mustang in 1969. Having resurfaced briefly in the early 2000s, the Mach 1 makes its debut again in 2021, and this time on local shores too, where **Driven** was afforded the honor of partaking in this formidable stallion’s launch drive.

Designed to be positioned between the standard Mustang GT and the more exotic Shelby Mustangs, The Mach 1 is somewhat of a Frankenstein project as it features many elements raided from the Shelby GT350 and GT500 parts bins. Instantly noticeable, this is no ordinary Mustang GT. Distinguishable by the wider and deeper upper and lower grilles up front, 19-inch five-spoke rims, aggressive side skirts, a lower front splitter, a boot spoiler and a rear diffuser from the GT500, flanked by giant quad exhausts, this noble steed ranks highly among the harass. All the units destined for South Africa feature an exclusive Fighter Jet Grey coating, sporting satin black stripes and orange accents. There is no visible Ford logo on the Mach 1 as this has been replaced by the Mach 1 logo on the boot lid, with the fabled stallion featured centre stage, on the grille.

The interior boasts the standard Mustang flair. Leather sport seats with contrasting grey stitching, complemented by a Mach 1 badge on the passenger side of the dashboard, along with the build number, distinguishes this special edition.  A premium ten-speaker Bang and Olufsen sound system, a 12-inch Sync3 infotainment unit, and heating and cooling front seat functionality, are notable features. In addition, the dash also houses a 12-inch digital instrument cluster through which the driver can cycle through the various driving modes and track apps.

The Mach 1 is powered by Ford’s powerful 5.0-litre Coyote V8, producing 338 kW of power and 529 Nm of torque. Churning out 7 kW more than the standard Mustang GT, this is the same engine that powers the limited-run Mustang Bullitt. On the surface the Mach 1 does not appear to be a dramatic improvement over the GT but, rest assured, there is significant change under the ventilated bonnet. The engine boasts a wider 87mm throttle body, low-pressure port fuel injection, an intake manifold from the Shelby GT350 and an open air induction system. The performancing enhancing treatment is sufficient to accelerate this large sports car from zero to 100 km/h in 4.4 seconds (4.8 seconds in the auto) and a full gallop to a top speed of 267 km/h. in the manual (249 km/h in the auto). Peak torque is achieved at 4900 rpm and peak power 7250 rpm, when the sound of rolling thunder emanates from under the hood. The engine is characterful, and through its valved exhaust system, this beast sounds like it is gargling grenades. The Mach 1 may not break the speed of sound, but it certainly comes close to breaking the decibel meter.

Offering two transmission options, a 6-speed manual and a 10-speed automatic, only 15 of the former and 75 of the latter are available in South Africa. The 6-speed TREMEC TR-3160 manual gearbox, sourced from the Shelby GT350, makes its debut in a production Mustang. The manual gearbox allows for ‘flat-shifting’, which permits the driver to upshift without lifting a foot from the accelerator pedal. In addition, rev-matching technology now makes obsolete the traditional ‘heel-and-toe’ on the downshift. The automatic transmission features an upgraded torque converter and model specific calibration for manual shifting using the steering wheel mounted paddles.

The Mach 1 showcases more than mere straight-line performance. Hidden beneath the sculptured body are stiffer front and rear suspension sway bars, and the rear subframe from the GT350, which aids in handling as a result of its impliable structure and compressed bushings. In addition, MagneRide 2 active dampers are included as a standard feature.

All of this translates to a stallion with the best handling dynamics South Africa has ever witnessed in a Mustang. A true driver’s car in terms of power delivery and handling, the Mach 1 is notably superior to the GT model.

The launch cars were all equipped with the automatic transmission, allowing for a  seamless meander through the winding mountainous roads in the Western Cape, albeit with an almighty roar. With that burly Coyote engine roaring unashamedly into the serene mountain air, we were impressed by the exuberance with which the Mach 1 gathered momentum. Unlike muscle cars of old, accelerating out of a corner is no longer a life and death situation in this modern marvel of engineering. The Michelin Pilot Sport 4 tyres offer reassuring grip and the orange six-piston Brembo brakes provide significant stopping power.

Driving the automatic on undulating mountain passes, using the semi-automatic function via the steering wheel mounted paddles comes in handy as it prevents the car from ‘hunting’ through the 10-speed automatic transmission. However, for those dreaming of becoming the next Lewis Hamilton, the manual version offers the ideal driving school.

The Mach 1 exceeds expectations as it encapsulates everything that is exceptional and synonymous with the Mustang brand. This is a car that you will not only enjoy marvelling over when parked in your driveway, but one that you cannot wait to unleash on an open road. South Africa was not privy to the Mustang GT350, but if our experience in the Mach 1 is anything to go by, this is as close an experience to the GT350 we are going to get, at a more reasonable price. Pricing starts at R1,182,100 for the manual and R1,203,800 for the auto, which is however obsolete information as all 90 models are already spoken for.