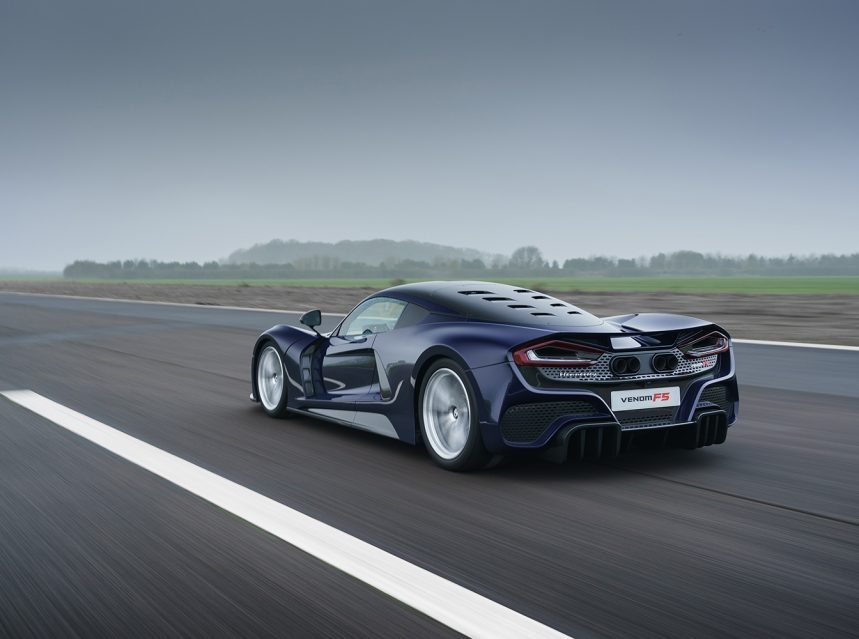 No matter what they tell you; there is only one reason for the unveiling of the production version of the ultimate Texas Tornado – the Hennessey Venom F5 – and that is to reclaim the “fastest car in the world” title for the speciality vehicle builder from America.

Hennessey Performance maintains that the successor to the Venom GT (reckoned to be the fastest car in the world not so long ago but since then surpassed by the Koenigsegg Agera RS, Bugatti Chiron Super Sport and SCC Tuatara) is “about more than just speed and power”, and was designed to be a “decathlete for the road”. Yet its name already gives the game away…

The F5 is the most powerful category of wind in the Fujita Scale of Tornado Intensity, which identifies the greatest wind speeds as being between 420 and 512 km/h – the type of velocity John Hennessey and his team hope to reach in their quest to establish a new hypercar speed record.

The Venom F5 concept of 2017 marked a giant leap for Hennessey as it was the first 100 percent bespoke product in its history. The production car – developed under the guidance of ex-GM vehicle dynamics and performance engineer and racing driver John “Heinrocket” Heinricy – is priced at $2.1 million (approximately R32.2 million) and only 24 ultra-exclusive versions will be produced, with deliveries starting this year. 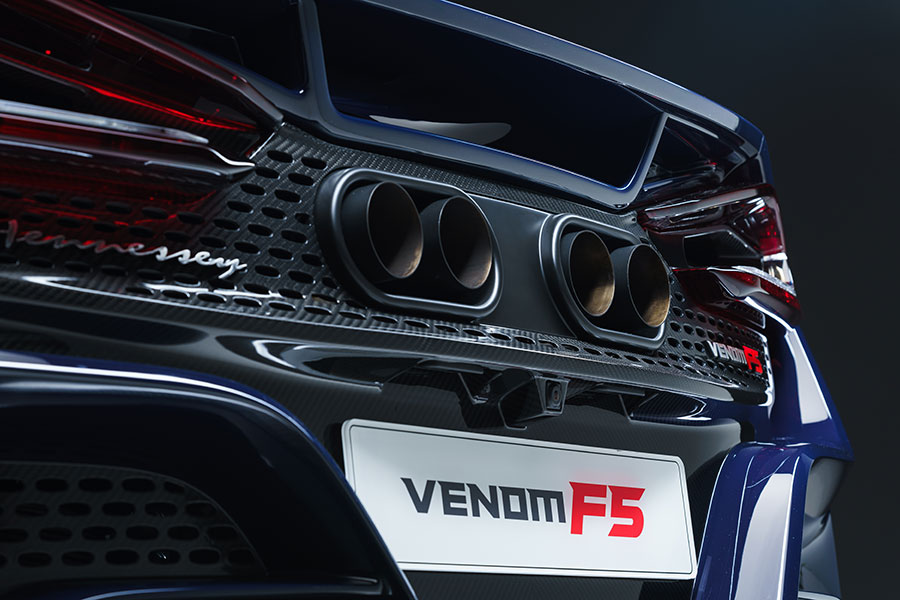 According to CEO John Hennessey, the Venom F5 was developed as an all-round performer, blending high levels of driver engagement and outright performance to create a motoring experience unlike any other. “The Venom F5 is engineered to be an unrivalled ‘decathlete’ among hypercars,” he says. Yet it is also the antithesis of the every day “soft and docile” hypercar – visceral, wild and thrilling, always an occasion to drive.

Weighing only 280 kg, the bespoke, hand-built 90-degree push-rod cross-plane crank V8 features a cast-iron block and aluminium cylinder heads. The crankshaft, pistons, valves and connecting rods are crafted from high-grade metals, such as aluminium, titanium and Inconel, and the engine bay is treated with Cerakote to protect it from excess heat.

According to Hennessey, the engine has an extremely flat torque curve, producing high twisting force levels from low down in the rev range. Interestingly, the only option capable of transferring all this furious torque to the road was a specially designed single-clutch semi-automatic CIMA gearbox, longitudinally-mounted, with seven ratios.

The set-up features close ratios at the lower end for rapid acceleration, and the acceleration is, to put it mildly, prodigious: the 0-100 km/h sprint takes less than three seconds, and the 0-200 km/h run comes in under five seconds.

Longer higher ratios are used to achieve a top speed (on paper, at least) of over 500 km/h. The highest (7th) ratio is geared for a theoretical top speed of 534 km/h but, according to Hennessey, the team does not plan to hit this speed; it merely allows sufficient scope to pass the 500 km/h mark (and hopefully the 508 km/h target set by the SCC Tuatara). 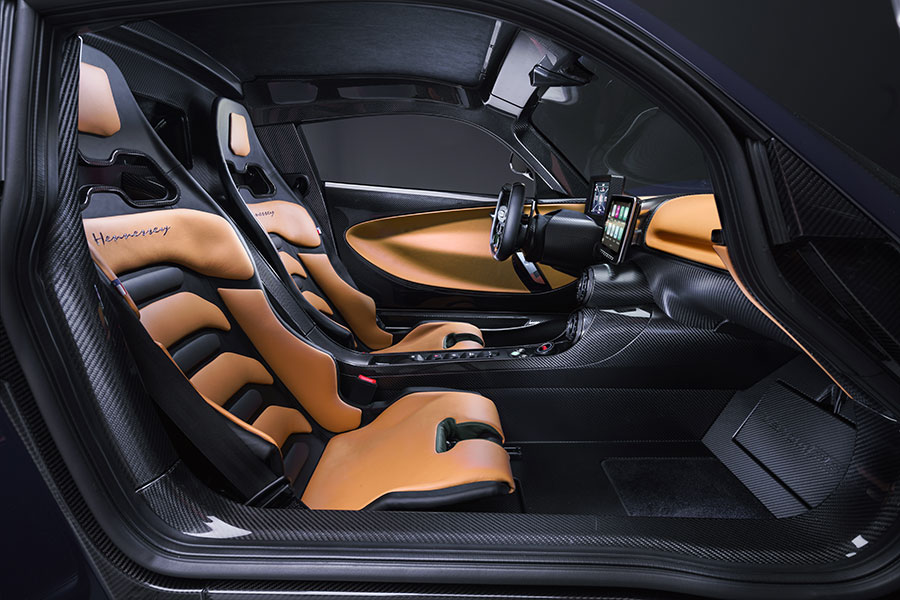 At the core of the F5 is an ultra-lightweight carbon fibre monocoque that tips the scales at only 86 kg. The carbon chassis features an intricate herringbone pattern weave, and moulding the interior and exterior parts required more than 600 separate bespoke pieces of tooling.

Its rigidity is crucial, and the monocoque’s 52,000 Nm per degree (38,353 lb-ft torque per degree) provides a solid base. According to Hennessey, this will give the F5 “more bandwidth” than other hypercars – making it capable of being driven easily on sweeping rural roads or at speeds over 500 km/h.

Hennessey Director of Design Nathan Malinick explains that the F5 design journey started with the goal of making the fastest car in the world. “We worked hand-in-hand with our engineering team to ‘skin the beast’ with aerospace-inspired forms to create a machine that is highly capable technologically, but that is also beautiful.”

The front is dominated by a pair of air intakes on the outer lower edges and two supporting pillars of the carbon diffuser, which appear like “fangs” converging below the newly-designed Hennessey ‘H’ logo. Behind the front splitter, the bodywork channels air under the flat floor towards the rear diffuser.

Two large ducts at either side of the front bumper force air towards the brakes, and two subtle ducts separate the airflow, moving it away from the wheels to reduce drag-inducing turbulence. At 4,666 mm long and 1,971 mm wide, the compact F5 is only marginally larger than its spiritual predecessor, the Venom GT.

With a drag coefficient of 0.39 Cd, the bodywork wraps tightly around the forged aluminium wheels (19” front/20” rear), accentuating the low, speed-optimised stance. With a subtle spoiler just above the bodywork, the back is arguably the car’s most attractive view. A “track pack” with a more aggressive front splitter and a rear-mounted wing, will also be available.

Opening the butterfly-door, the interior design evokes the spirit of fast aircraft cockpits with minimal distractions. There is raw carbon fibre throughout, with hints of luxury from leather panels on the doors, dashboard and seats. The steering wheel is inspired by an aeroplane “yoke” and in the centre is a green switchable drive mode dial for Sport, Wet, Drag, Track, and F5 modes.

A 7.0” instrument cluster shows a different colour and content layout with every drive mode. The dash also features leather and aluminium inserts, and the door handles are accented by aluminium inserts with the Texas and US flags, displaying the F5’s proud American heritage. A 9.0” Alpine touchscreen infotainment system gives access to Apple Car Play and Android Auto with satnav, stereo functionality and Bluetooth phone pairing. 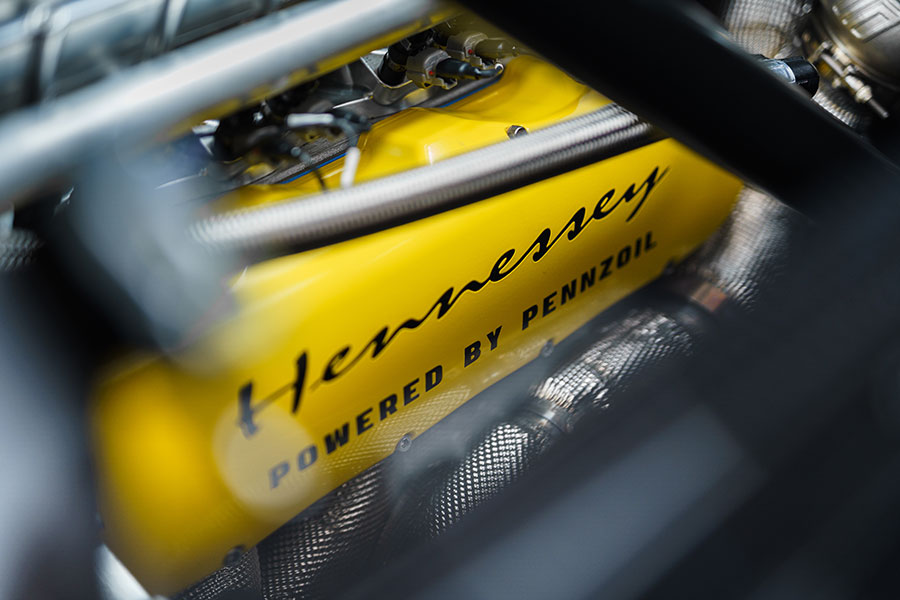 Alongside aerodynamics, significant consideration was given to both unsprung mass and achieving a low centre of gravity. Carbon-ceramic brakes, forged aluminium wheels and lightweight Penske dampers keep unsprung mass low, making the F5 feel nimble and “alive”. The centre of gravity is kept low by the engine’s position and drivetrain deep within the car’s substructure.

However, with such immense engine force, the transfer of power to the wheels while providing optimal traction under acceleration and cornering is a challenge. This is handled by an exact Motec controller, calibrated for optimum power and traction control, and huge Michelin Pilot Cup Sport 2 tyres (345/30/20 at the rear, 265/35/19 at the front).

As part of its validation and to underscore the Venom F5’s position at the peak of hypercar performance, Hennessey is targeting a top speed in excess of 500 km/h and vows to prove this during a two-way validated speed run later this year, using a production specification car. We will watch this effort with interest. 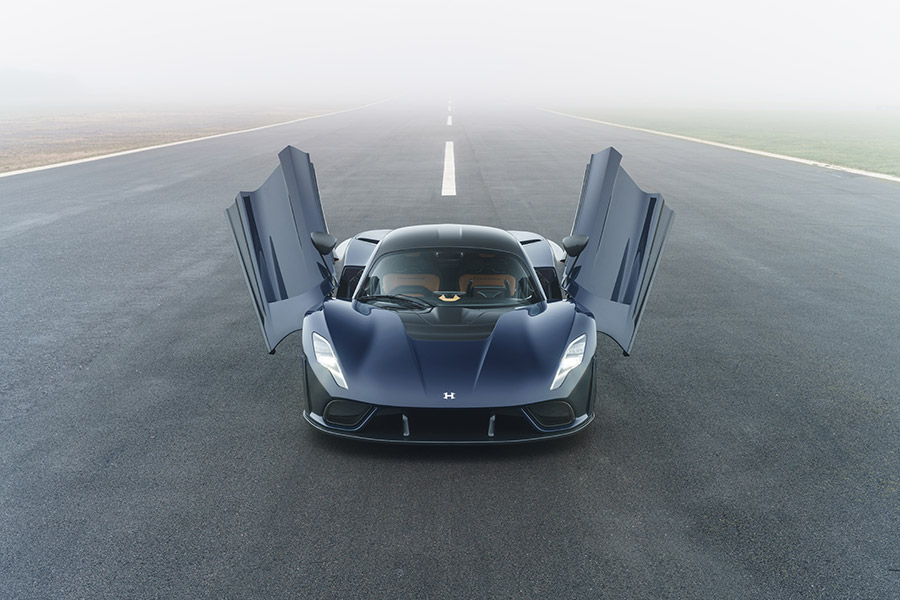 The F5 is the distillation of 30 years of expertise, knowledge, and engineering – the culmination of Hennessey’s innovation and success, and serves as a launch-pad for the next 30 years. As such, the F5 marks the beginning of a new era for the American performance engineering company.