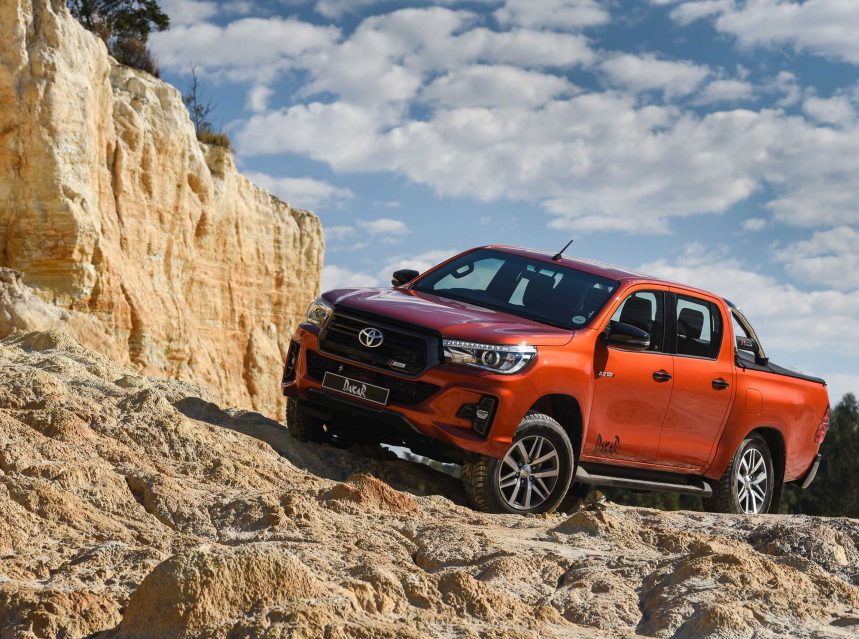 Toyota’s recipe to capture the imagination of their Hilux fans is exemplified by special edition models that keep the model range interesting, and the buyers buying. The Dakar Special Edition is a case in point, and BERNIE HELLBERG recently came face to face with it on the Goera Pan outside Upington in the Northern Cape.

The Toyota Hilux is a legend in its own time. Its cult status gained from its near-unmatched inherent strength, durability, and capability.

Nowhere have these characteristics been put to better test than in the world’s most epic off-road event, the Dakar Rally. It is the ultimate test – and that statement is not made lightly – of man’s ability to create machines that are capable of literally conquering the most inhospitable terrain in the world.

The SA-built Toyota Hilux rally bakkies stand proud as an example of that ability, and showcase Toyota’s bakkie-building prowess, and what better way to celebrate the four podiums that these vehicles have gathered over time, than with the introduction of a limited edition model named after the race itself. 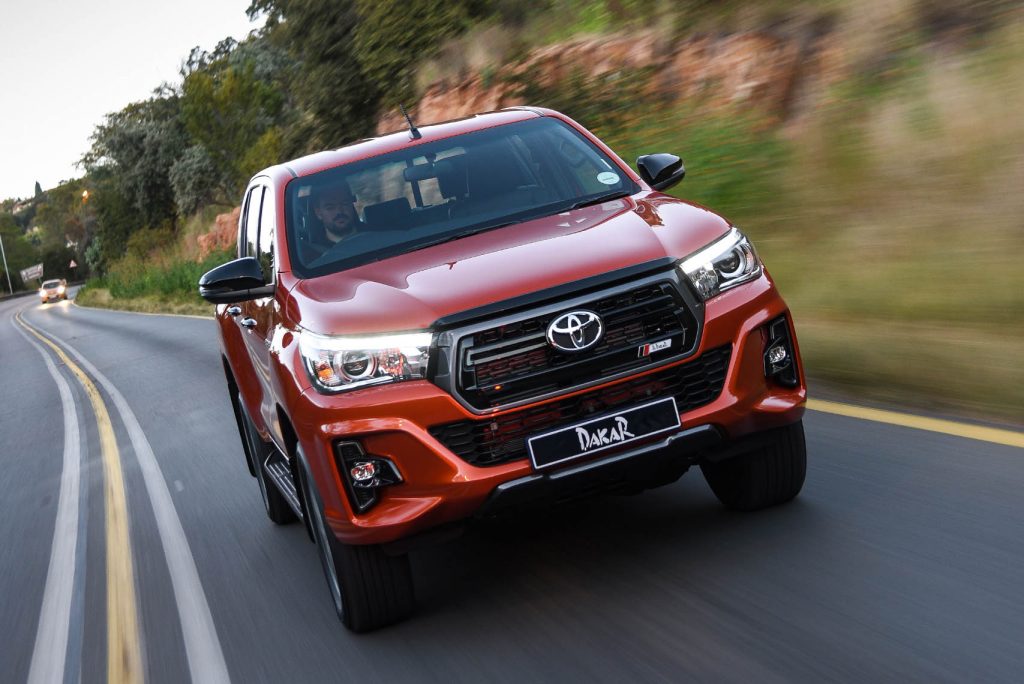 The limited run Hilux Dakar Edition isn’t new to South Africa, but the latest version brings a brand new face to the current Hilux range, one that not only updates the look, but hints rather heavily at the next generation of Toyota’s global light commercial success story.

Most evident on the Dakar Edition is the prominent trapezoidal grille and ‘squared-off’ design. The central focal point is the sizeable gloss-black-honeycomb grille, which incorporates two horizontal sections that are bordered by a metallic grey surround with a three-dimensional look that blends nicely into the LED headlamps. Matching gloss-black accent strips on the bonnet and Dakar signage on the grille complete the design.

Below the grille, another large honeycomb ensconced air intake dominates the bumper, extending almost to the side of the vehicle where it meets aggressive-looking fog lamps inserts in durable gloss black plastic. The fog lamps themselves utilise LED elements for superb illumination.

There are also a number of Dakar Edition-only touches including gloss-black door handles and power-retractable side mirrors. Showing that the strong leisure focused attitude of the Dakar Edition Hilux, the rear bumper is fashioned in grey, to tie in with the front design. 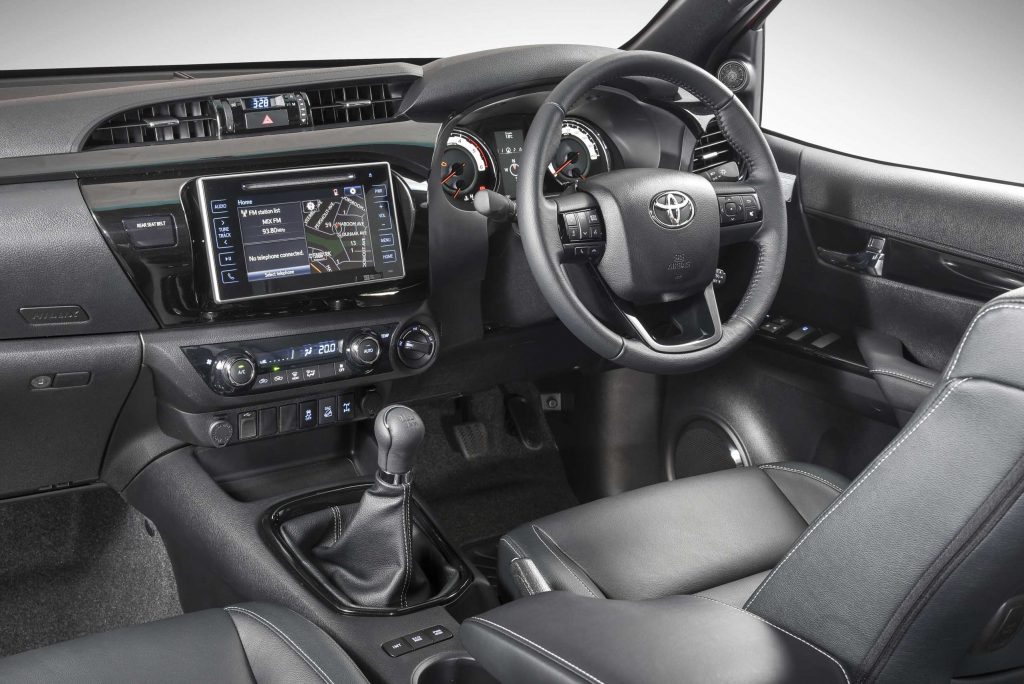 The interior, for example, features all-black treatment, with a black roof headliner (it is light grey on the Raider), metallic black trim accent panels that are, in turn, silver on Raider, and black leather upholstery with light grey contrast stitching – seats are fabric only on Raider models.

On the digital side, the Dakar Edition receives an instrument cluster and infotainment upgrade over standard Raider models.

Also new, and unique, is a stylised premium-look instrument cluster with white-faced gauges, orange needle pointers and bespoke graphics that Toyota says are meant to look like gear cogs, and when the starter button is pushed, the LCD multi-information display also features a start-up graphic that shows off the Dakar model’s exterior.

PROVEN ON- AND OFF-ROAD 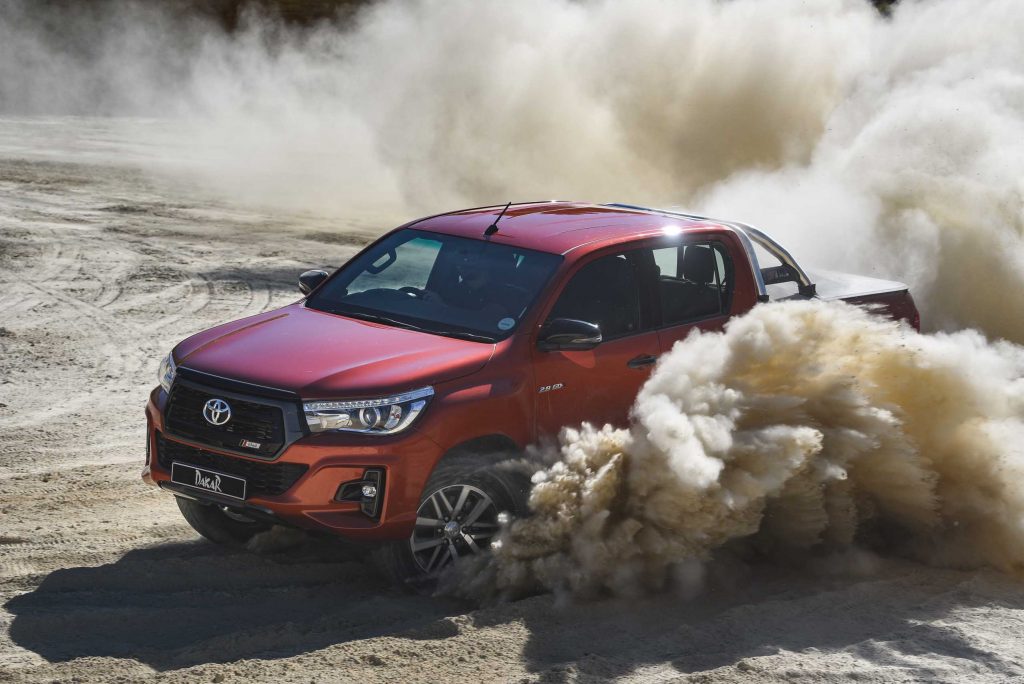 As a reminder, the Dakar Edition is based on the existing Raider version, so it is only available with either the 2.8 GD-6 or 4.0-litre V6 engine options. The 2.8-litre, four-cylinder turbo-diesel engine produces 130 kW and 420 Nm in manual transmission guise, and 450 Nm in automatic mode. The 2.8 GD-6 is available in either Xtra cab or double cab configuration, and can be ordered as rear-wheel, or switch-on-the-fly four-wheel-drive. This brings the total number of diesel versions to four, while the V6 variant (producing 175 kW and 376 Nm) can only be specced as a double cab with a six-speed auto ‘box.

Fuel consumption varies between 7.6- and 8.5-l/100 km and is dependent on drivetrain configuration. 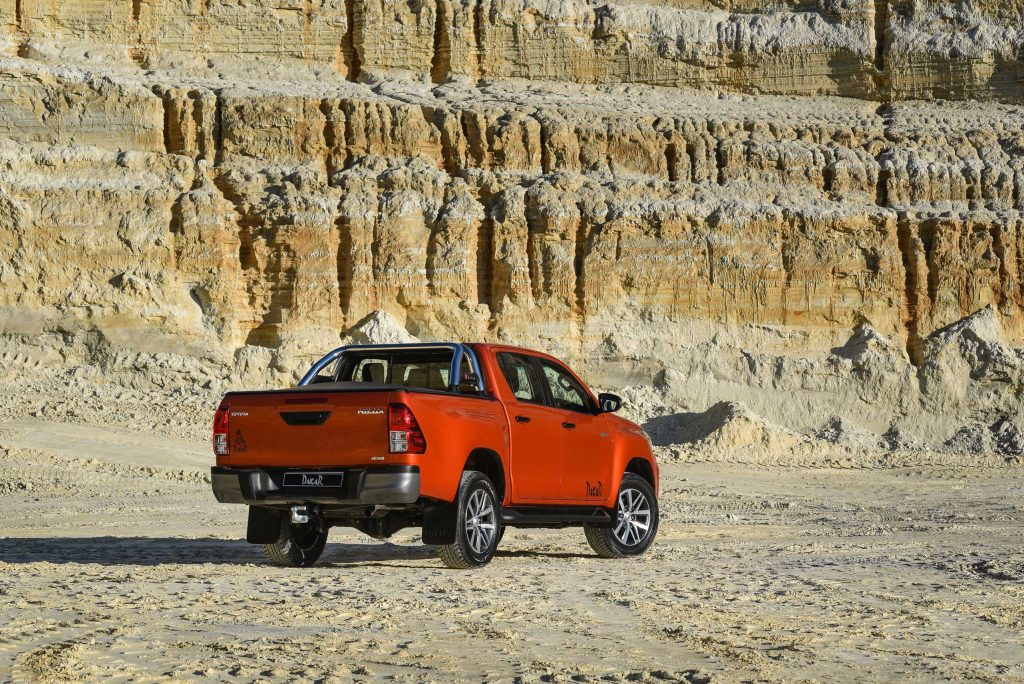 With the introduction of the Mercedes-Benz X-Class and the 2017 debut of the Volkswagen Amarok V6, competition in the premium bakkie segment is getting seriously tough. And while the Hilux Dakar Edition does not strictly fit the premium bakkie mould, it is currently the pinnacle of the Toyota pick-up range, and considering its starting price – from R470,300 – it makes a compelling argument with updated tech and seriously good looks. And with only 5,000 units scheduled for production, it’s bound to become something of a collector’s item in the future.