We were right in the thick of it. I’m referring, of course, to the unwavering dust cloud we travelled through in the Matetsi Safari Area shortly after crossing the border between Botswana and Zimbabwe. With the dust of the leading cars hanging around with the persistence of the mid-winter flu and visibility oftentimes somewhat tricky – despite massive following distances – decisions were made in a matter of split-seconds. No matter, though, we were in the Toyota Hilux GR-Sport and this was its playground.

Think Hilux, and for some it probably conjures up images of a plaasbakkie that leaves a substantial dust cloud in its wake. Or the family weekender. Maybe a workhorse? The list goes on because since just over 50 years ago, when the Hilux was first sold in SA, it has carved itself a loyal following and, in the process, established itself as quite the economy-defying vehicle. In South Africa, you can be certain of two things: Taxes and Hilux sales that register in its thousands.

Take June for instance, when sales registered an all-time high of 4,770 units – 1,885 of which were double cabs. Quite the legendary achievement, we’d say. And, while we’re on the topic of legendary, with the nameplate being locally available for half a century now, Toyota observed tradition and launched both its Legend 50 and GR-Sport derivatives to celebrate this.

Some might call it persistence, others the fruition of long-term visions and planning, but the last year or so has been extremely good for the Japanese marque. It has now finally won the 24 Hours of Le Mans, following several ‘close but no cigar’ attempts. Ditto with the Dakar Rally, in a South African-built and developed vehicle no less.

These achievements also provided a platform for special road-going vehicles from Toyota. Like the (very limited edition) three Yaris GRMNs that made it into South Africa last year and represented Gazoo Racing know-how in a fitted-with-airbags package. This expertise now also trickled into the DNA of the Hilux, albeit only in Dakar Hilux-lite form, with the GR-Sport edition of which only 600 units are available. 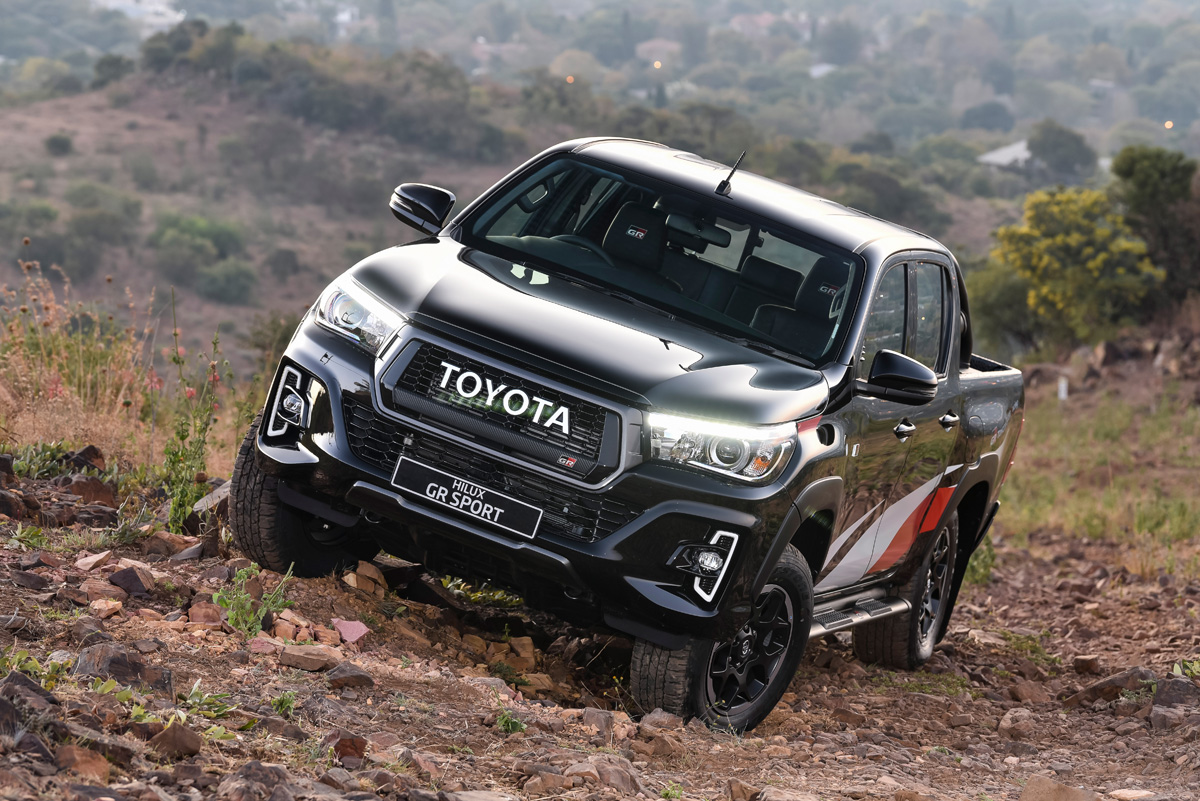 The Hilux GR-Sport (as well as the Legend 50, which we’ll get to in a bit) was recently launched with the beautiful and rugged Southern African regions of Botswana and Zimbabwe as the backdrop. And rugged, as we’ve found, is the forte of the GR-Sport.

The “Sport” in its name represents the second tier of the Gazoo Racing pyramid with not only a cosmetic enhancement but also a suspension upgrade. On the cosmetic front, the grille received ye ol’ enlarged and antagonistic treatment, while all three colour derivatives – available in a choice of either black, red or white – come with a black bonnet and roof. Furthermore, it’s GR-branding all-around, while Gazoo Racing decals and a GR-specific 17” wheels also come as standard fare.

It’s much the same GR garnish on the inside with red accents on the dash, red stitching on the seats and a plate number indicating the unit number out of the 600 batch. Also new is an enlarged 8” infotainment screen that is now better integrated into the dashboard.

Whilst it looks good, that won’t exactly help the special Hilux cope off the beaten track. For that, the marque’s motorsport division has reworked the suspension to offer both increased stiffness and damping that offers better off-road handling and significantly improved off-road body control. The change-ups also extend to the blacktop with slightly improved on-road steering feel, while the rear suspension set-up remained unchanged in order for the GR-Sport to cope with the same payloads as its siblings. 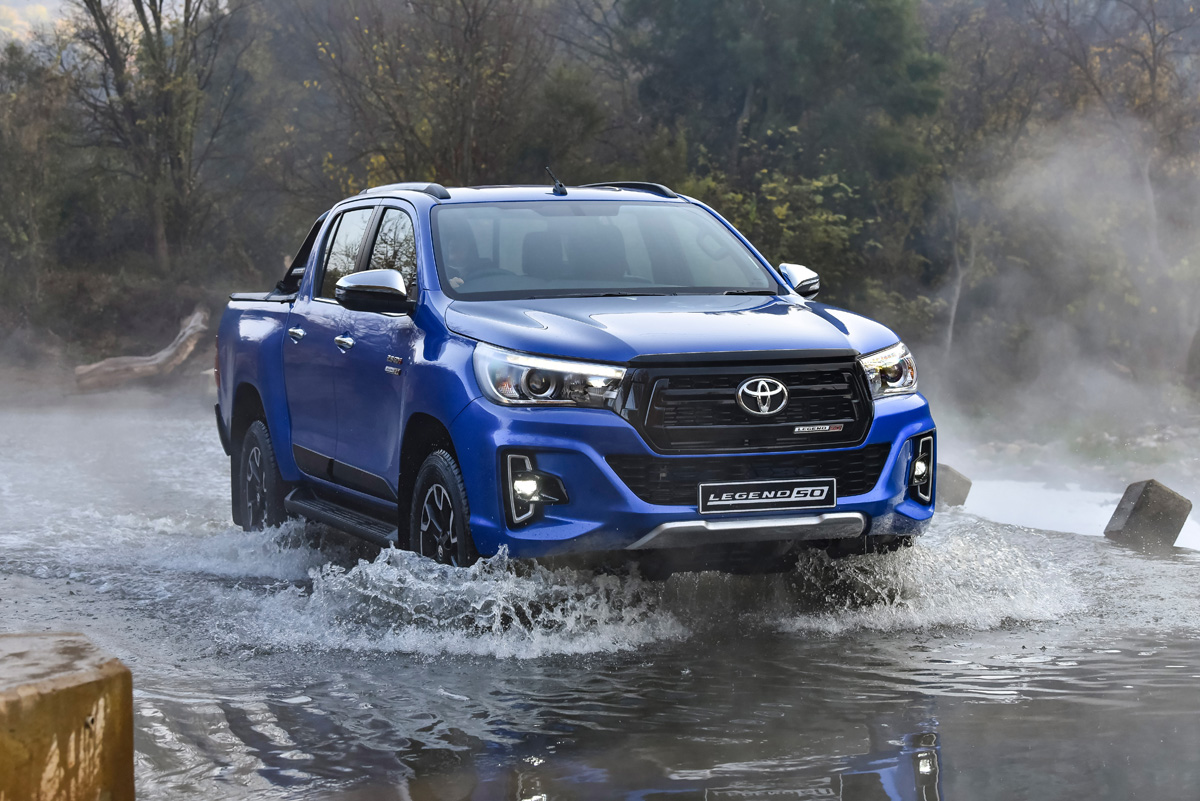 The Legend 50 model, as is custom, also received some visual enhancements. Highlights include the upper and lower grille that has been fully blacked out, a silver scuff plate at the front, a customised styling bar and Legend 50 badges that confirms the heritage of the bakkie. While the Legend model is somewhat less dramatic from a visual point of view compared to the GR model, it too features Legend-specific two-tone 18” rims that add a welcome focal point to Hilux.

Inside it’s a case of subtle tastefulness with a chrome-finished accent strip that runs across the width of the dashboard and Legend 50-branded scuff plates that grace the door sill. Electronically, highlights include the 4.2” TFT driver display as well as the same enhanced 8” infotainment system that can be found on the inside of the sportier GR model.

While we were in the thick of it – the lingering sub-Saharan Africa dust clouds that is – the black Toyota Hilux GR-Sport we were in for the most of the test route handled whatever the gravel road was throwing its way with relative ease. It’s not pretending to be anything as dyed-in-the-wool as upper-echelon gravel travellers that some of its competitors are offering. Nevertheless, it’s still extremely capable when the going gets tough with a gravel composure that belies the standard look of the vehicle – when you leave the decals out of it, of course. This becomes especially evident when switching to the standard Legend 50.

Not that the Legend is lacking in this department, though. It still handles like the Hilux many have come to love, and with the manual-only derivatives on offer during the launch (as opposed to the all-auto line-up of the GR) the 50th-anniversary model felt a tad more engaging to drive.

It’s been a good year or so for the Toyota nameplate. But it’s also been an educational half-a-century for the Hilux brand since, as a bakkie, it’s better than ever. It now has most character-traits buyers of this kettle of vehicle are looking for, and then some. Don’t believe me? Just look at the sales figures.