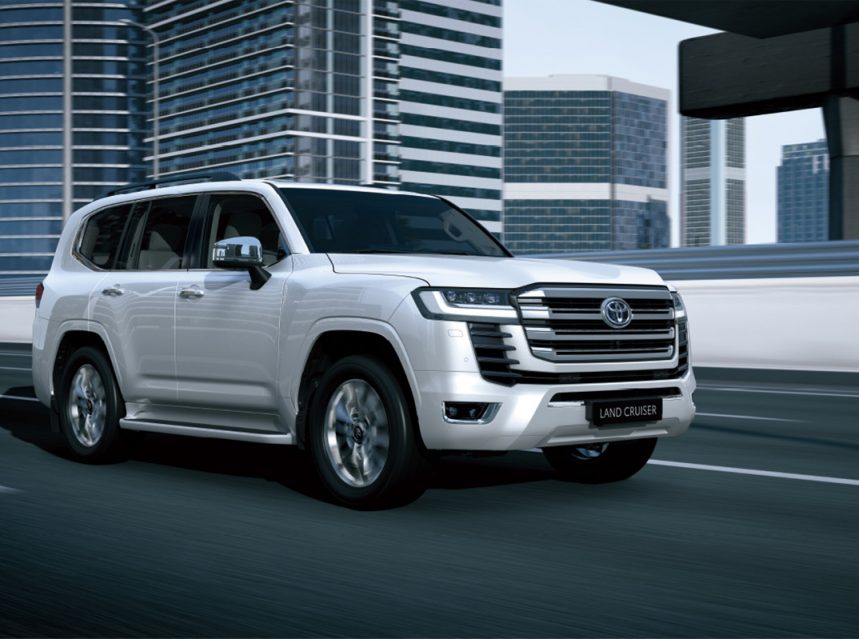 The highly-anticipated and wholly redesigned Land Cruiser 300 made its international debut via digital reveal in early June. Driven had a front-row seat, as it were, to the action as it unfolded.

As the successor to the iconic Land Cruiser 200 SUV – Toyota’s most highly regarded and largest SUV – the new Land Cruiser 300 aims to disrupt the large luxury SUV market with new tech, a sharp new look, and a range of new petrol- and turbodiesel engines.

While these statements are mostly valid for just about every new car launch out there, I must hand it to Toyota for the design work they’ve done on the new car.

It’s by no means easy to take an oversized two-box design and present it with a contemporary look that will remain current for at least another eight years. New Land Cruisers don’t come along every day, after all.

Land Cruisers have an iconic profile, and the newcomer proudly continues this legacy. Yes, the front with its massive grille may not be to everyone’s liking, but the unmistakable visage makes sense proportionally and underlines the 300’s status as the “King of Africa”.

As with most vehicles in modern times, pictures don’t do them justice, and, often to our detriment, we judge the proverbial book by its cover. I suspect this might also be the case with the Land Cruiser 300. Once (in)famous for their conservative designs, Toyota has spent most of the last decade chucking all manner of cautions to the wind, convention be damned!

Toyota has even gone as far as using design elements (grille and bumper garnishing, mainly) to distinguish between different Land Cruiser 300 models. Three are destined for Mzansi.

Looking at the grille, massive chrome elements are substituted for matte black plastic on the range-topping GR Sport version, while all three models sport a colossal U-shaped chromed radiator inlet that gives the SUV an unmistakeably masculine appearance. At the rear, the trapezoidal LED clusters are equally impressive, proportionally matching the sheer magnitude of the Cruiser’s rear.

Known as the LC300 in shorthand, the Land Cruiser 300 is set for local introduction in August 2021 (Covid restrictions notwithstanding) and will be introduced with two brand new engines – a 3.5-litre turbo petrol V6 and a 3.3-litre V6 turbodiesel. Toyota fans may recognise the former powertrain from its application in another mighty Toyota product, the Lexus LS500 sedan. We have sung the LS500’s praises in previous editions of Driven, and back then, I was quite enamoured with the engine’s (and gearbox’s) smooth power delivery and responsiveness. It remains to be seen if its application in a 3-tonne-plus goliath is equally pleasant, although my money is on the V6 turbodiesels to entice most buyers.

The petrol engine is expected to deliver a mighty 305 kW of power and 650 Nm of torque, while the oil-burner will provide 227 kW and a humongous 700 Nm of torque. That is a significant improvement of 32 kW and 50 Nm over the outgoing 4.5 turbodiesel V8. Buyers looking to tow with this beast will not be left wanting.

Both engines will send power to the drive wheels via a 10-speed torque converter automatic, which for obvious reasons is equipped with low range to underline the mighty four-wheeler’s off-road prowess.

On the technical side, it is noteworthy that the LC300 has been built on Toyota’s New Global Architecture platform. It is the first body-on-frame application of the platform and ultimately means that the new car is lighter, stronger, and more rigid than its forebear. According to Toyota, this not only improves the LC300’s off-road capability but will lead to improved dynamic handling as well. Again, the proof of the pudding will be in the eating, when we finally get to pilot the new car on home soil next month.

As mentioned, three models are heading our way, with the top-of-range GR Sport (positioned as the sportier version, hence the Gazoo Racing prefix) leading the charge. The mid-range grade will now be known as ZX (replacing the VX-R terminology), while the entry-level is now the GR-X derivative.

Toyota has not revealed too much regarding the LC300 interior. Still, if recent upgrades to their other vehicles are anything to go by, the Cruiser will most certainly have one of the most advanced, comfortable, and luxurious interiors that Toyota can muster. Naturally, you will get what you pay for, and that is another card that Toyota is playing close to their chest. Pricing will be released upon local launch, but we expect the range to begin around the R1.4 million mark.