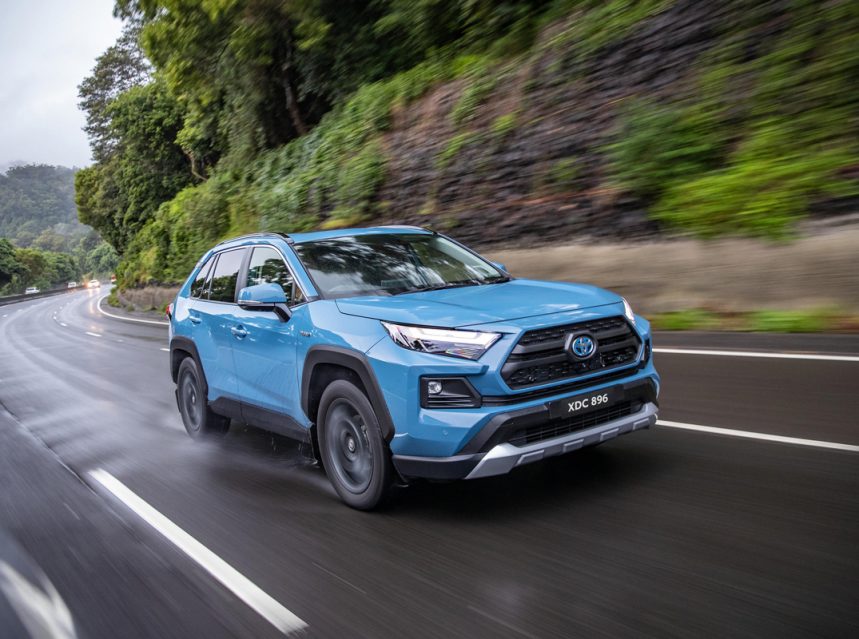 That’s because the original RAV4 EV, introduced 25 years ago (just like the Prius, the first hybrid Toyota model), was not meant for the mass market and was only leased to companies in the US state of California before production was suspended in 2003 (when NiHM EV-05 battery used in this model was no longer available).

And, the reason for the battery shortage? Well, after the Chevron oil company took over its Texaco rival, it acquired the rights to the battery (Texaco bought it from General Motors) and decided to no longer make it available to Toyota (you can draw your own conclusions from this).

Based on the third-generation RAV4, the second EV model was developed in California in association with Tesla and introduced in 2012 – a decade ago. With a range of 166 km and powered by a 115 kW electric motor, this model was produced until 2014, when the agreement between Toyota and Tesla ended.

Meanwhile, development of the hybrid RAV4 continued unabated, and late last year – shortly after the world premiere of the bZ4X at Auto Shanghai – the first RAV4 hybrid models, with front-wheel drive and GX trim, were launched locally as part of the fifth-generation line-up.

Now, with the all-electric bZ4X in production, Toyota has reviewed its local RAV4 range and, besides bolstering it with two hybrid all-wheel-drive E-FOUR models, has replaced the GX grade with two new trim lines – GX-R and VX.

The change in line-up was prompted by the introduction of the Corolla Cross Hybrid, as this model provides direct competition to the GX. It also presented an opportunity to introduce the E-FOUR models (in both grades), providing not only conventional front-wheel drive but also electric rear-wheel drive.

The new GX-R E-FOUR model is distinguishable from its conventional AWD partner by a blue-tinted Toyota logo on the front grille, Hybrid signs on the sides and at the rear and 18” alloy wheels with a unique design. The VX model adopts a stylish and sophisticated exterior package, with a unique front grille treatment, deeper apron, and vertically mounted fog lamp bezels.

The VX variants’ leather-intensive interior also provides power-seat adjustment for the front passenger with driver memory function (while foregoing seat ventilation), front and rear park distance control, auto high-beam functionality, and auto-fold operation for the exterior mirrors. Another highlight is the panoramic view monitor, which is newly joined by a digital rear-view mirror.

Both models feature a semi-digital instrument cluster with a broad-spectrum Multi-Information Display (MID) to monitor eco-driving performance (including an EV-mode usage infographic) and E-FOUR operation, alongside the usual MID parameters. All the models now have LED interior illumination, five USB ports (with dedicated charging outlets) and two 12-volt accessory connectors.

All the Hybrid models employ a fourth-generation Toyota hybrid system that, in the E-FOUR, combines a 2.5-litre Atkinson cycle 4-cylinder petrol engine with an electric motor (on the front axle), a rear-mounted electric motor (MGR) and a CVT transmission to provide on-demand AWD to the powertrain matrix.

The E-FOUR system transforms the personality of the RAV4. While the normally aspirated GX and AWD models felt lethargic on the road, the hybrids exhibited much better drivability – with a newfound willingness to perform, leading to brisk acceleration and improved cruise speed modulation, as well as enhanced handling due to the responsive power distribution between front and rear wheels.

The system automatically optimises the torque distribution ratio according to driving conditions (it can vary between 100% in the front to a 20/80 front-rear split), and besides different driving modes (Eco/Normal/Power/EV), it has Auto LSD/Trail Assist mode to improve traction on slippery surfaces.

The hybrid models feel heavier, with a slightly harder ride compared to the “normal” models, but they have other benefits. One such is that energy regeneration under braking or coasting ensures good fuel consumption (on the test route, we averaged 6 l/100 km, giving a range of nearly 1,000 km), which makes the E-FOUR derivatives the better choice – also considering the small price difference (R20k to R40k) between the normal and hybrid models.