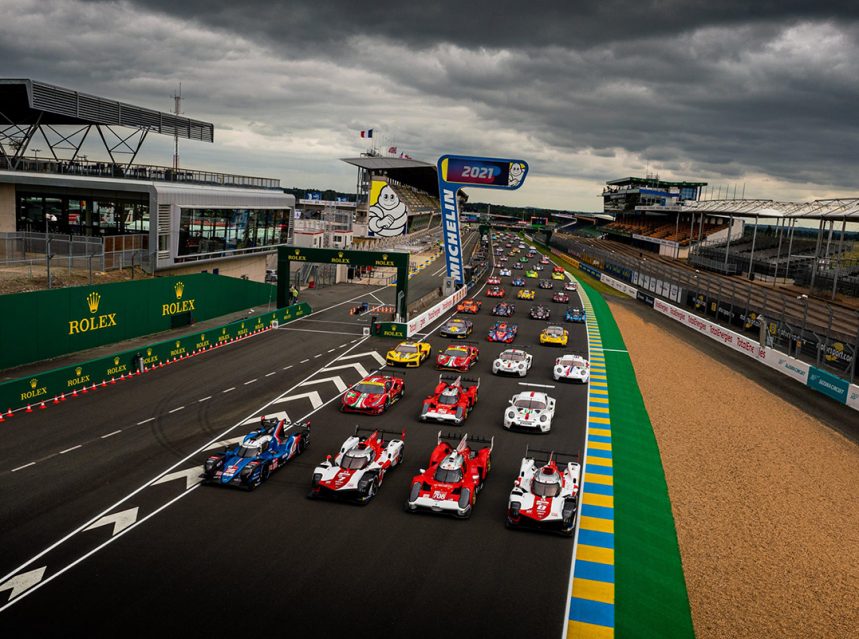 The Toyota GR010 Hybrid will go down in history as the first Hypercar to win the 24 Hours of Le Mans as the #7 Toyota in the hands of Conway/Kobayashi/López triumphed in a challenging race affected by temperamental weather.

To the delight of the endurance racing family, the fourth round of the FIA World Endurance Championship took place in August at the Circuit de la Sarthe in front of a hyped crowd of 50,000, the maximum authorised in France during current circumstances.

Following a summer of rain in the Pay de la Loire, and an unseasonably cold summer in France, random downpours and cold weather threatened to disrupt race proceedings at the start of the race. Notwithstanding the inclement weather, with crowds happily back at the track to witness the dawn of the Hypercar era, the 24 Hours of Le Mans was true to form – a gruelling test of mechanical and human resilience. Of the 61 cars at the start, 44 crossed the finish line at 16h00 on Sunday 22 August.

For their first 24-hour race, the Hypercars sprinted ahead of the rest of the field, displaying impressive reliability and consistency. Rapidly putting the unforeseen incidents in the early stages of the race behind them, the two Toyota Hypercars gradually forged a comfortable lead. Untouchable throughout the night, the Japanese cars settled in for some sibling squabbles, flying around the circuit within seconds of each other.

Lagging several laps behind, the Alpine and Glickenhaus Hypercars were left to dispute third place. The French Alpine team won that battle when Glickenhaus fell foul due to mechanical issues as morning dawned following an eventful and teeth grinding night.

Mike Conway, Kamui Kobayashi and José María López, in the #7 GR010 Hybrid, finally won Le Mans for the first time following several heart-breaking near misses in three preceding years. Starting from pole position, the World Champions led for the majority of the race and completed 371 laps.

On a rain drenched track, following a rolling start, the new Toyota Hypercar’s Le Mans debut nearly ended in tears on the first lap as Sébastien Buemi in the #8 Toyota turned into the path of the #708 Glickenhaus as the leading cars entered the esses at the end of the pit straight. The collision sent Buemi spinning of the track and dropping to the back of the field. Fortunately for Buemi, the #8 Toyota suffered only minor damage and he soon made up for lost ground, which in the end enabled last year’s winners Buemi, Kazuki Nakajima and Brendon Hartley to achieve a flawless result for the team as they managed to secure second place, ensuring a one-two victory for Toyota.

Mike Conway led the field from pole in the #7 Toyota and, despite two punctures, set the pace at the front as the #8 Toyota moved into second place despite further misfortunes. Positioned in second place behind its sister car, the #8 Toyota suffered a damaged wheel rim following contact with a lapped car and a puncture of its own.

Rain in the sixth hour induced several near fatal incidents, including a 20-minute safety car, but the two Toyotas remained comfortably ahead of the rest of the field. The race ebbed and flowed between the two cars, with slow zones and safety cars contributing to a fluctuating gap.

Tensions were high in the Toyota Gazoo Racing garage in the final quarter of the race as a result of an issue on the fuel system of the #8 Toyota prevented it from completing full stints. Following consecutive fuel stops, it returned to the pits earlier each time as the team worked tirelessly to resolve this issue.

With four laps in hand over the third-placed Alpine, and no prospect of a speedy repair, a remarkable team effort tested several alternatives until an effective counter-measure was developed. The drivers had to activate a specific setting at defined points around the track to return the #8 Toyota to normal stint lengths.

That proved even more crucial when the leading #7 Toyota developed a similar issue, but this time the drivers could readily manage the situation and maintain a comfortable lead.

The two Japanese drivers, Kamui Kobayashi in the leading #7 Toyota, and Kazuki Nakajima in the second place #8 Toyota, took over their respective cars for the final stint and crossed the line simultaneously for a famous one-two victory to help earn Toyota a dramatic fourth consecutive 24 Hours of Le Mans victory and to become the first Hypercar winners at the Circuit de la Sarthe.

AN INCREDIBLE END TO THE RACE IN LMP2

Competition is always ferocious in LMP2, and this year Team WRT went from excitement to bitter disappointment in the space of a lap. Having dominated the race in spectacular fashion the Belgian outfit was poised for a one-two class-victory when the #41 Team WRT car in the hands of Robert Kubica came to a grinding halt on the side of the track. The #31 Team WRT held off the #28 Jota in a memorable dash to the finish line, which even surprised the official waving the chequered flag on the pit straight. Panis Racing took third place.

The LMGTE Pro class often provides for the most spectacular sporting entertainment at Le Mans, and this year was no exception, with an epic head-to-head between Ferrari and Corvette. After 24 hours, there was a mere 42 second gap between the leading AF Corse #51 Ferrari 488 GTE and the Corvette Racing #63 Chevrolet Corvette C8.R, on its maiden race at Le Mans! The AF Corse Ferrari admirably resisted the Corvette onslaught to provide Ferrari chairman and this year’s race starter, John Elkann, with a pleasing result. Earlier Elkann had announced that the Prancing Horse will return to the top class of endurance racing with a Hypercar entry in 2023.

AF Corse garnered two class wins at this year’s 24 Hours of Le Mans as the team founded by the 2020 Spirit of Le Mans awardee, Amato Ferrari, drew on its wealth of experience to keep the #83 AF Corse ahead of the TF Sport #33 Aston Martin. Rookie Callum Ilott and his teammates took third place with the Iron Lynx #80 Ferrari 488 GTE Evo.

For the last two years, as a result of the global pandemic, the 24 Hours of Le Mans was held in September and August respectively, but next year the famous 24-hour race will return to its usual mid-June slot with the 90th edition of the grueling race scheduled for the weekend of 11-12 June 2022.