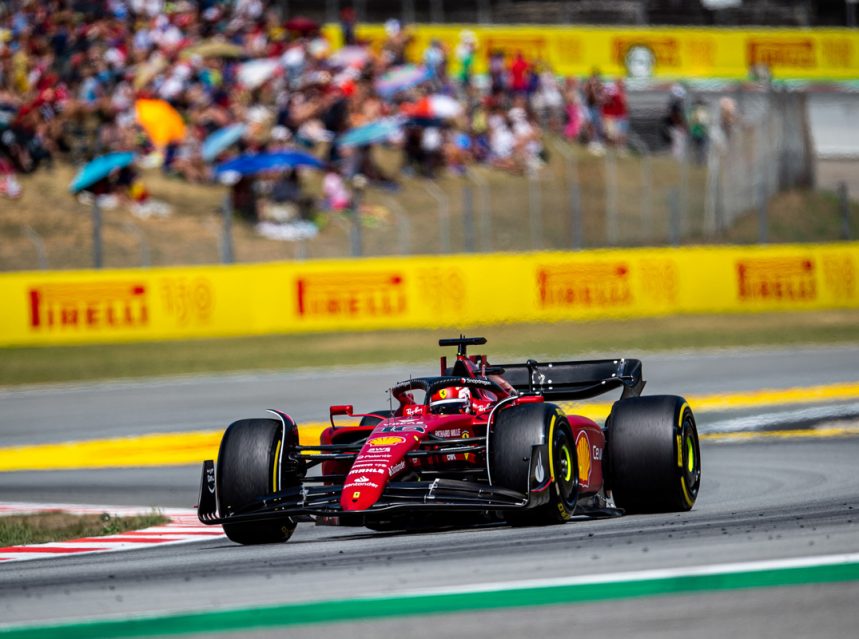 Inopportune tyre graining, unexpected reliability problems, and terrible strategy calls – those are the factors leading to frustration at Ferrari, with Charles Leclerc losing the championship lead with a third of the season run. Meanwhile, with three race wins on the trot, resurgent Red Bull and defending champ Max Verstappen now have track position.

Following their dismal showing in Italy, Scuderia Ferrari again showed the potential of their F1-75 package by posting the fastest qualifying times for the first-ever Miami F1 Grand Prix. Despite the front-row lockout, with Leclerc on pole and Carlos Sainz alongside him, Ferrari couldn’t convert their advantage to a win – while Red Bull and Verstappen made it two wins in a row.

The reigning champion got past Sainz into Turn 1 at the start and began to close in on Leclerc. Suffering early tyre degradation in the stifling heat, the Ferrari driver lost the lead to his rival on lap nine of 57. He pitted for hard tyres on Lap 24, with Verstappen reacting two laps later.

By now, Verstappen was cruising to victory in the Miami Gardens marina, but on Lap 41, a VSC-going-to-safety car, triggered by an ill-conceived clash between Pierre Gasly (Alfa Tauri) and Lando Norris (McLaren), again brought Leclerc, Sainz, and Red Bull teammate Sergio Perez (who pitted for mediums under the safety car) into play.

At the restart, Verstappen struggled to get away from Leclerc while Perez hounded Sainz for the final podium place. The Mexican attempted to pass the Spaniard on lap 52 but locked up, while Leclerc could not stay within striking distance of Verstappen’s Red Bull on the long straight for a DRS-pass. Verstappen won by three seconds from Leclerc, followed by Sainz and Perez.

George Russell (Mercedes), who started 11th, pitted during the VSC period, passing teammate Lewis Hamilton on new tyres on Lap 54 to score fifth place. Hamilton was promoted to sixth when Valtteri Bottas (Alfa Romeo), on lap 49, went wide into the tight corner after the long straight.

The top three celebrated in front of the statue of Miami Dolphins legend Dan Marino after being police escorted to the podium, where Indycar legend Willy T Ribbs conducted their interviews.

After the Miami razzmatazz, with F1 gaining even more popularity ’States-side’ (although the track was criticised for the lack of grip and its Micky Mouse layout), it was on to Spain. With upgrades for virtually every team (except Haas, while Aston Martin brought a Red Bull-lookalike), some shake-ups were expected, but come race day, it was Ferrari and Red Bull up front again.

Red Bull was now only six points behind Ferrari, and Verstappen 19 points behind Leclerc, and this is also how they stacked up on the grid on an unseasonably hot day, with Sainz in third, Russell in fourth, and Hamilton in sixth.

As the lights went green in front of a capacity Catalunya crowd, Leclerc just managed to stay ahead of Verstappen into Turn 1, but Sainz was down to fifth as Russell and Perez snuck through. Kevin Magnussen (Haas) was quick from eighth to challenge Hamilton into Turn 4, and the pair banged wheels – the Dane took a trip through the gravel and pitted, falling to last after pitting, with Hamilton down to 19th after stopping for softs. The despondent Briton hinted at retiring his Mercedes but was convinced otherwise by his pit crew.

Meanwhile, polesitter Leclerc was storming away into a seemingly insurmountable lead, while teammate Sainz spun at Turn 4 on lap seven, going from fifth to 11th. Then Verstappen did the same on lap nine (tailwinds being the issue for both) and dropped to P4 behind Perez.

Perez tried to get past Russell but to no avail, and Verstappen (allowed past his teammate on lap 11) then took up the chase. A malfunctioning DRS made it impossible for him, and he was now beginning to hold up Perez. Meanwhile, Sainz worked his way back up the order, and leader Leclerc made a free pit stop, retaining a five-second lead.

Russell displayed immense race craft keeping the Red Bulls behind him, and Perez – not allowed to pass the Dutch driver – was getting annoyed. Then, on lap 27, a faulty power unit on Leclerc’s Ferrari forced him to retire.

Suddenly, Russell was leading the race, and Red Bull pitted Verstappen to undercut him, while Perez snatched the lead from the Mercedes on lap 31.

Verstappen caught up to Russell by lap 37 when Russell pitted. Perez was again in the lead, but pitted soon after for a new set of mediums. Verstappen pitted again on lap 45, and then team orders saw him pass Perez (an “unfair” call, according to the Spaniard) to take his third win on the trot by 13 seconds.

Russell finished third with Sainz fourth after a late repass on Hamilton. The Briton put in a fantastic drive to recover to fifth (he was voted Driver of the Day), with Bottas taking a solid sixth for Alfa Romeo.

With Verstappen now leading the championship over Leclerc, and the Red Bull one-two seeing them ahead of Ferrari on the constructors’ leader board, the field headed to Monaco. Shrugging off the curse of his home track, Leclerc qualified immaculately, putting his Ferrari on pole with Sainz next to him, ahead of the two Red Bulls, with Perez quicker than Verstappen.

With the cars already on the grid, the rain poured down, further delaying an already late start. An hour later, the race started behind the Safety Car, with everyone on wet tyres.

After three laps of 77, the Safety Car pulled in and Leclerc sploshed away, closely followed by Sainz, Perez, and Verstappen in what turned into quite a chaotic race. On lap 17, Perez came in for intermediates, with Leclerc and Verstappen following two laps later.

Sainz decided to stay out, initially against the advice of his team. And then skipped straight to the hard compound dry tyre on Lap 21. However, he was held up by a backmarker on his out-lap, costing him dearly. Even worse, a call to Leclerc to stay out was too late, leading to a slow double-stacking in the Ferrari pits.

With Red Bull following with a double-stack a lap later, they pulled off an overcut – with Perez now leading from Sainz, Verstappen, and a furious Leclerc.

Then Mick Schumacher dramatically crashed at Swimming Pool, his Haas cut in half, bringing out a further red flag on lap 30.

Now running against time, the race resumed on lap 33 with the Ferraris on hard tyres and the Red Bulls on mediums. Perez initially looked comfortable in the lead, but then his tyres started dropping off with about 10 minutes remaining. However, he held on by 1.154s over Sainz at the chequered flag, with Verstappen only 0.337s behind the Spaniard, with a shocked Leclerc in fourth.

It was a huge feat after the disappointment of the Spanish Grand Prix, with Perez becoming the first Mexican driver to win in Monaco and the most successful Mexican F1 pilot. Russell again rounded out the top five ahead of Norris, with Alonso (seventh) holding up Hamilton (eighth) for most of the race.

As the F1 circus heads to Baku for the Azerbaijan Grand Prix, Verstappen has a nine-point lead over Leclerc in the Drivers’ Championship, and Red Bull leads Ferrari by 36 points in the Constructors’ Championship.