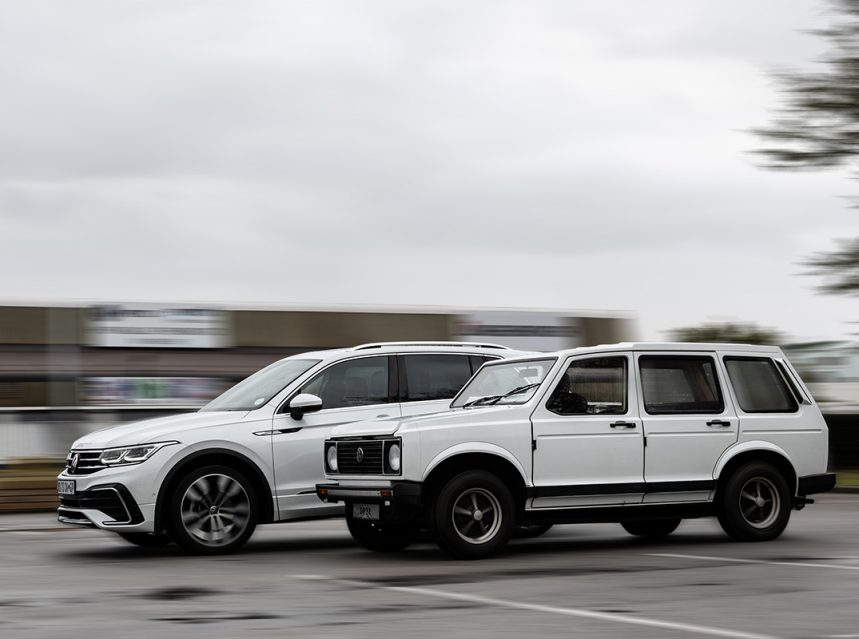 Recently updated, the Tiguan spearheads the burgeoning Volkswagen family of SUVs. But what if we tell you Volkswagen South Africa foresaw this crucial category in the modern arsenal of nearly all carmakers over four decades ago? On the eve of the 70th anniversary of VWSA, we introduced the newcomer to the uniquely South African Project 1021.

In an age of smartphone cameras and high-speed internet, when was the last time a car reveal was kept genuinely under wraps until its scheduled reveal? Even then, how long has it been since those gathered at the unveiling were treated to a true, in the metal first glance at an all-new shape and design?

Arriving at the Kariega-based Auto Pavilion of Volkswagen South Africa after collecting an updated Tiguan, I could merely smile at the sight of a vehicle I until that moment had only heard about, with no prior context around what form it actually took. A full ten minutes later I was still taking in the intricacies of a package that, by all accounts, was years ahead of its time.

Celebrating its 70th anniversary on 31 August, VWSA has undertaken a variety of unique vehicle projects over the years, including distinct homegrown adaptations of the Beetle (remember the 1600 S, SP and Lux Bug?), the exclusive Big Window T3 Bus models with 2.3-litre, 2.5- and, 2.6-litre five-cylinder Audi engines, and of course, the CitiGolf range with unique taillights and later, an adapted Skoda Fabia dashboard.

Besides a few noteworthy South African engineered and developed racing cars, there were some very special road car projects, such as a very fast Mk 4 Golf R32 and more recently, the Vivo Dune Concept car. However, Project 1021 (pronounced ten-twenty-one) was a serious and massive undertaking at a time when Volkswagen South Africa needed a credible stop-gap solution, quick.

In 1976, monthly sales of the Beetle were eventually showing signs of decline and with the estimated local launch date of its replacement, the Golf, still uncomfortably far away, technical director of VWSA, Tucker Lockhead, set in motion a plan to bridge this gap.

Led by August Jukel in Uitenhage and calling on the expertise of ex-Lotus man Chris Rawlinson of the United Kingdom-based fibreglass company Ex-Press Plastics, the vision Lockhead had was to use the floorplan and running gear of the Type 1 Beetle as the platform for a vehicle that was to be more comfortably than its donor car and could transport a young family and their respective goods.

Codenamed Project 1021, the brief was for a station wagon and a bakkie type vehicle. It was designed by Peter Stevens and engineered and developed by a company called SmallFry, named after its founders Anthony Smallhorn and Tim Fry. Fry was previously head of design at the Rootes Group where he designed the Hillman Imp.

With its Beetle-sourced upright twin-port 44 kW 1,600 ccengine situated over the rear axle, the packaging of Project 1021 is as fascinating as it is strange. Indeed, with a fuel tank position up front below a subsequently relatively shallow front storage area and a rear engine bay, the square-shaped wagon only has three doors.

A lone rear passenger aperture opens to the left-hand side of the vehicle, as the opposite panel houses an air intake, leading rearwards to the engine, and two additional intakes are located on either D-pillar. Curiously, there is no tailgate access to the packing space available above the engine bay.

Presumably, owners would simply reach over the backrest to retrieve their (surely well-warmed up) parcels. This arrangement is somewhat impractical but its design cues leave no doubt that this vehicle is an interesting precursor to the modern compact SUV (back when the term was not even coined yet).

It is minimalist and strictly analogue inside, with a Beetle steering wheel and seats front and rear, and I did smile again at the sight of the golf-ball shaped gear knob – no doubt shipped to South Africa and used ahead of the arrival of the car it would ultimately become synonymous with …

Parked alongside the updated third-generation Tiguan, the forty-five-year-old 1021 is actually closer in size to a T-Cross than to the best-selling SUV from Volkswagen to date. Even so, one could argue that the Tiguan – derived from the same platform as the Golf – is its spiritual successor as it essentially took over the SUV mantle from the short-lived CrossGolf in 2007.

Comparable wheel size and intricate design detail aside, in the dimmed light of an overcast Eastern Cape day, the most striking difference between the two vehicles was their respective headlamp applications. While the 1977 model features items sourced from the Mk1 Golf, the new SUV is available with the latest IQ.Light adaptive LED lighting technology from Volkswagen, with distinctive daytime running lights housed within redesigned headlamp clusters, complemented by an altogether sharper family-familiar grille.

Other notable updates to the Tiguan include a fresh focus on driver assistance technologies, as well as a redesigned fascia in terms of both looks and functionality. Available in three specification levels, a popular choice in our market remains the dynamic R-Line package.

While it arguably does not hit the sweet spot in terms of value for this traditionally family-focused package, this flagship 4Motion derivative (until the Tiguan R arrives) features a 2.0 TSI turbo petrol engine delivering ample power and torque (162 kW and 350 Nm) to all four wheels via a seven-speed dual clutch transmission.

The latest Tiguan is still a consummate cruiser and continues to offer impressive levels of versatility. If there is a downside to opting for the sportiest-looking Tiguan, it is that the standard 19-inch wheels (or optional 20-inch items as fitted to our test unit) impact on the otherwise compliant ride quality of the vehicle.

Ultimately not considered a viable project (as local Golf production was given the green light), only four examples of the 1021 were built between 1977 and 1978. Intriguingly, two of these were stepped roof “station wagons”, and the other two were engineered as a pick-up (the first Amarok?). It is here where the story gets particularly interesting …

Finished as prototypes only, one VW Project 1021 pickup was apparently destroyed, and one wagon (now in the Auto Pavilion) was kept by VWSA. Fascinatingly, one station wagon and a pick-up somehow made it through a registration process, and certified roadworthy they headed off into the South African countryside.

The station wagon/SUV seemingly ended up in Knysna for years. However, it recently resurfaced and was advertised in the classifieds for a humble R50 000. As far as we could ascertain, it was immediately bought by a South African collector and now resides much closer to its original home.

And the pickup? Well, it would seem it spent many years somewhere on the Cape Southern Coast before it was sold again quite recently, and it now seemingly has found a home closer to Cape Town …