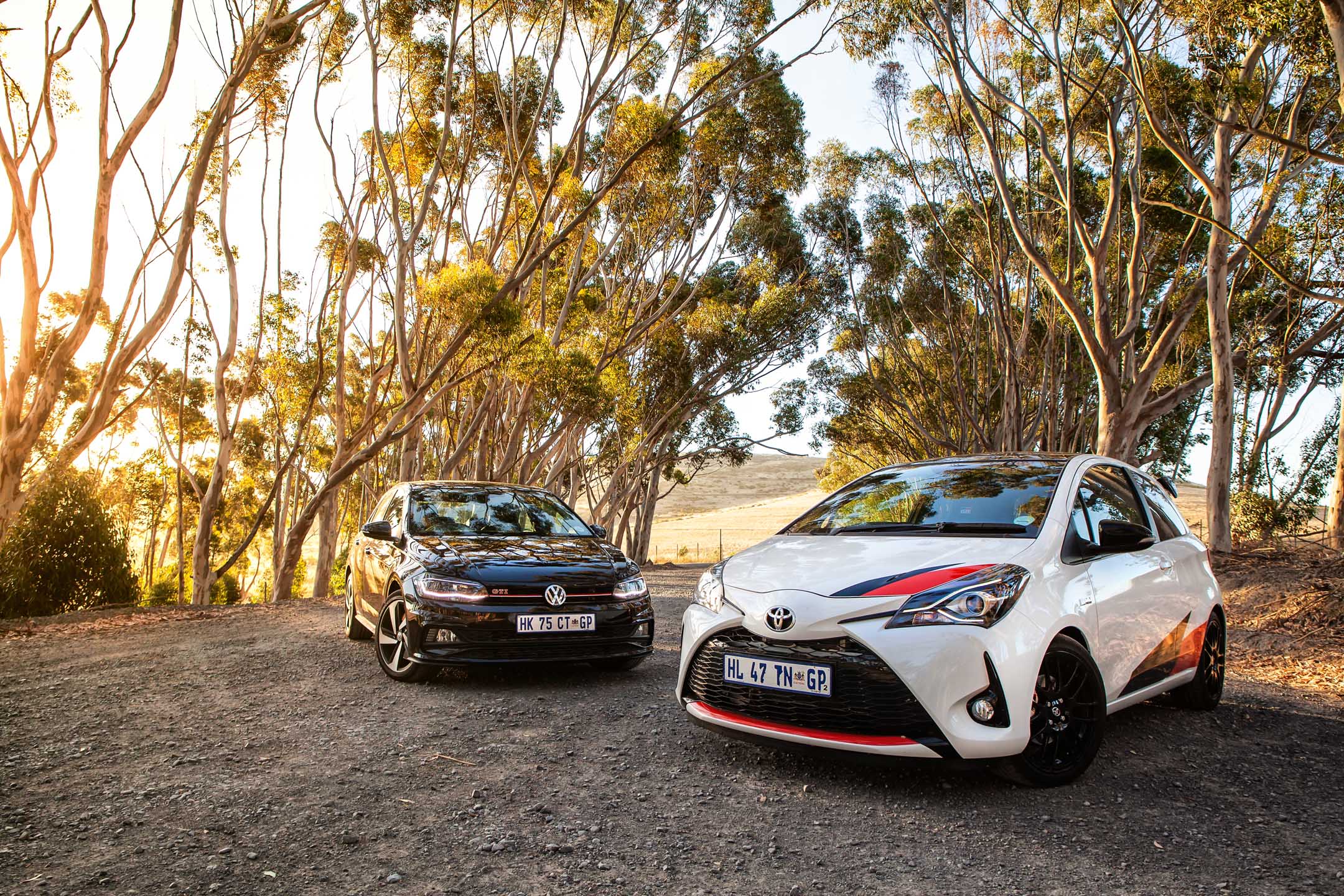 The one maintains a long lineage of performance-oriented hatches; the other is tasked with the establishment of a new performance brand, and yet, despite their divergent objectives, reports FERDI DE VOS both the Toyota Yaris GRMN and Polo GTI hark back to the glory days of the original pocket rockets.

The new Volkswagen Polo GTI and Toyota Yaris GRMN may be somewhat insignificant in size and deportment, but their importance cannot be underestimated in terms of what they represent in the long lineage of small performance vehicles from both manufacturers.

Crouching menacingly next to each other on a sweeping dirt road, the motorsport-inspired poise and style of the latest go-faster Polo and the quickest Yaris to date, was clear to see – the Japanese hatch proudly wearing the prominent livery of its championship-winning WRC sibling; the German adorned with less ostentatious markings. 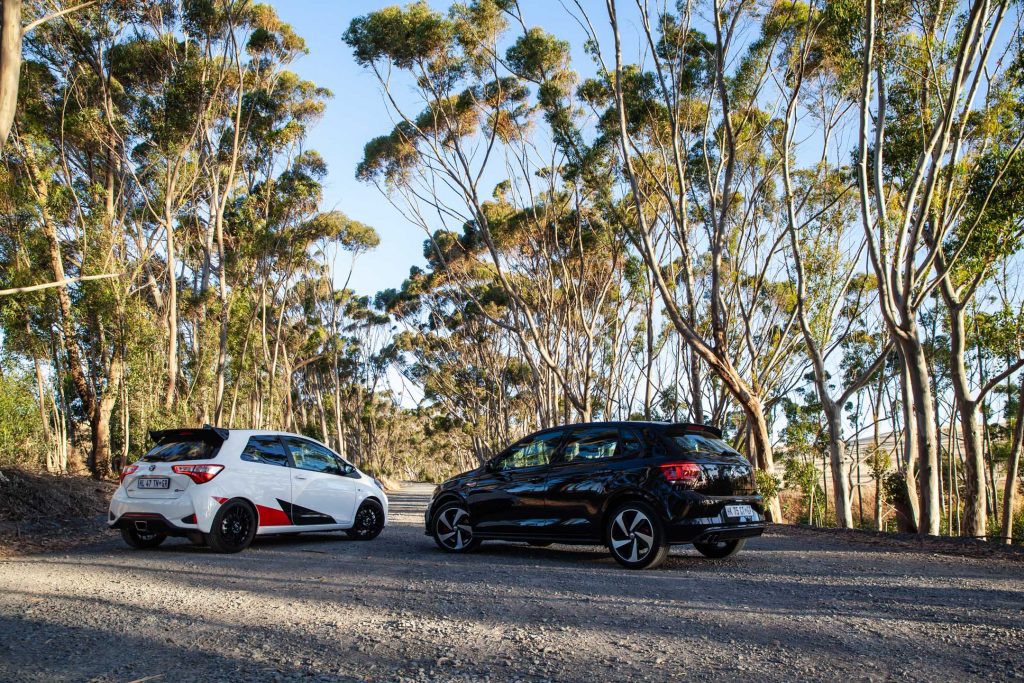 Internationally and locally, both manufacturers have a proud heritage in motorsport, VW scoring no less than 44 WRC victories and securing the SA Rally Championship six times on the trot with Polo cars, while Toyota notched up 49 WRC victories thus far, dominated the local rally scene in the 1990s and won the SA rally title thrice with the Yaris.

While Volkswagen established the GTI lineage as far back as 1976 (the first Polo GTI was released here in 1995), Toyota decided to discontinue its sporty RSi nomenclature, first seen on the 1986 AE82 Conquest, a decade ago. Yes, a mildly hot Yaris TS version was briefly available in 2009, but only in limited numbers, and since then no sporty small hatches were available from the Japanese brand.

Toyota, under the guidance of Akio Toyoda, has established Gazoo Racing, a new platform for Toyota to participate in global motorsport, and the ‘GR’ moniker is set to evolve into the Toyota performance brand, much like the AMG or M brands for Mercedes-Benz and BMW.
In line with this, the GR-brand will include four different levels of performance; the GR-Line, consisting of a cosmetic package; GR-Sport, with a suspension package; GR, with a power package, and GRMN with a high power package.

So, what does GRMN stand for? Well, essentially that such a car has been developed and honed at the Nürburgring – Gazoo Racing tuned by the Meister of the Nürburgring – and this special Yaris (only 400 were built) is the first fully-fledged GRMN model outside of Japan.
It also signals the start of the GR journey (with a GR version of the Auris hatchback – apparently to be renamed Corolla – also in the works), but as only the Asian-built Yaris is now being sold locally, we won’t see the Yaris GRMN or the GR-Sport derivative here.

As such, only three were brought to South Africa, solely for promotional purposes. In contrast, the latest four-door Polo GTI is built right here in Mzanzi in Volkswagen’s plant in Uitenhage, making it more affordable than the previously imported version. 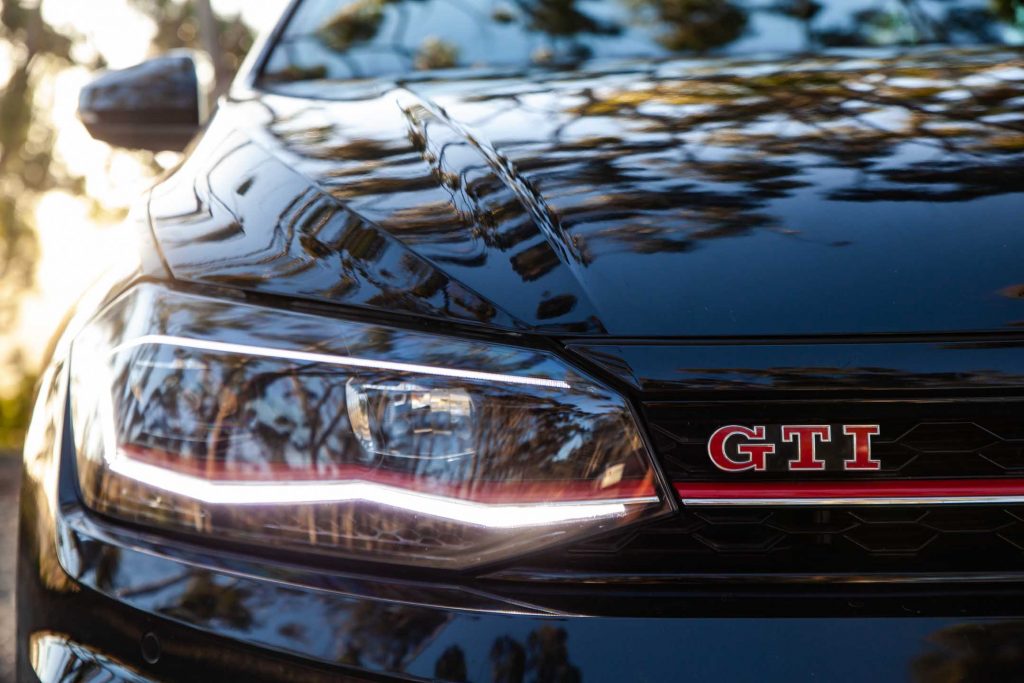 The expressive exterior and interior design of the sportiest sixth generation derivative is topped off with classic GTI insignia including the typical red stripe in the radiator grille, a GTI gear knob and door sill trim, extra chrome details and Art Velour upholstered sports seats.

It now comes with a largely digitalised and connected cockpit, as well as an extensive range of optional systems, including the Advanced Safety Package (which includes Parallel Park Assist, Park Distance Control, Rear View camera, Blind Spot Detection and Tyre Pressure Loss Indicator), which can add up to R100k to its retail price.

The newcomer also boasts 2.0-litre turbo power for the first time – having inherited the third-generation EA888 1,988 cc direct-injection petrol engine from the previous Golf GTI, slightly detuned to deliver a healthy 147 kW and 320 Nm of torque at a low 1,500 r/min.

Slightly lower than the standard Polo, the GTI has stiffened springs, uprated anti-roll bars and upgraded passive dampers as standard; but our test car was also equipped with the optional Sport Select suspension with compression and rebound settings that can be changed electronically via four different driving modes.

This, together with a suspension setup that includes thoroughly revised front knuckles, recalibrated suspension bushings, a stiffer torsion beam at the rear and altered axle geometries and roll centres, gives it not only the power, but also the dynamics of a true GTI.

Juxtaposing our contenders, the 1,798 cc four-cylinder dual VVT-i intelligent engine (also used in the previous generation TS) in the Yaris GRMN is boosted by a Magnusson Eaton supercharger, developing a solid 156 kW at 6,800 r/min and 250 Nm of torque at a high 5,000 r/min.

Interestingly, and in contrast to VW’s in-house development, Toyota has outsourced the supercharging of the 2ZR-FE based GRMN engine to Lotus – in much the same fashion it outsourced the multivalve head development of its iconic 4A-GE engine to Yamaha.

After receiving injectors from a Toyota V6, a larger throttle body and modified calibration at the Deeside plant in Britain, the engine is sent to Lotus Engineering to add the rotor-type supercharger, and then onto Valenciennes in France for final assembly.

Like its WRC counterpart, the Yaris GRMN has a three-door bodyshell, and its rally roots are emphasised by a bigger rear spoiler, bespoke rear bumper design and diffuser, honeycomb front grille and a central oval exhaust tailpipe, as well as a unique paint job. 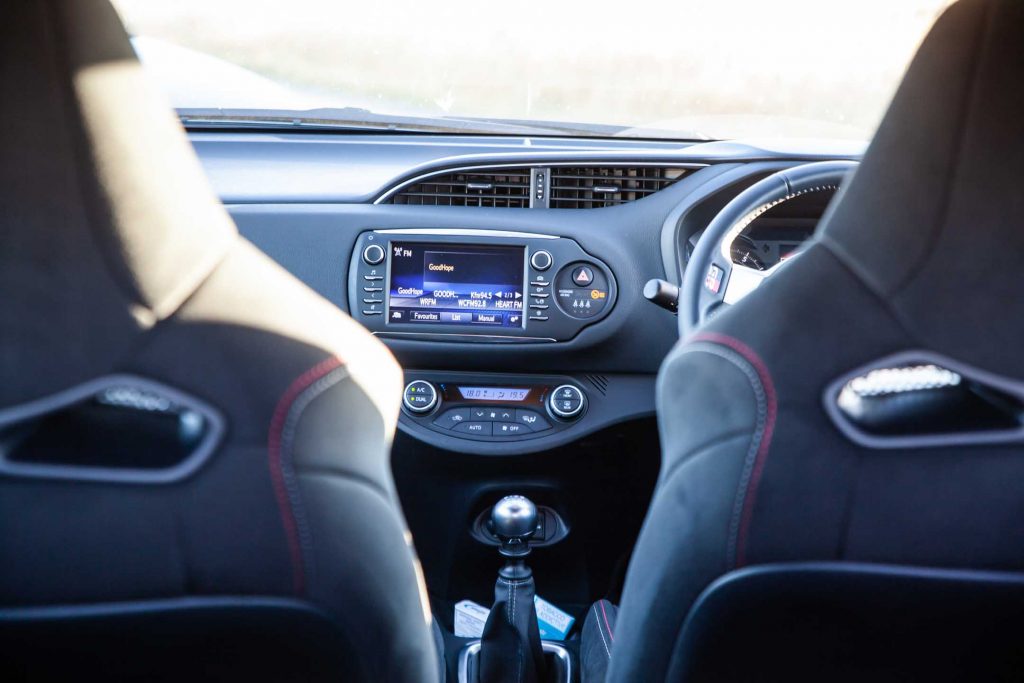 Inside, its performance credentials are expressed by figure-hugging Toyota Boshoku designed sports seats, and details such as an engine start button, a smaller leather-wrapped steering wheel, an aluminium pedal set and trim detailing, and an easy to use combi-meter with TFT display.

The burble emanating from the Polo’s twin exhausts at start-up is comfortingly familiar, and while not as pronounced as that of bigger brother Golf at speed, its engine note was (obviously) quite similar.

Its DSG ’box shifts fast and effortlessly, and in combination with the torquey powerplant, the GTI reached the tonne from standstill in only 6.7 seconds, accelerating up to a top speed of 236 km/.h.

The bigger bore (60 mm) exhaust of the Yaris, developed to reduce back pressure, gives it a slightly louder, more cammy engine sound, but under load, it is the whistle of its blower that defines the GRMNs sporty intentions. Weighing in at 1,135 kg, and with a best-in-class power-to-weight ratio of 7.28 kilograms per kW, the Yaris is super quick. 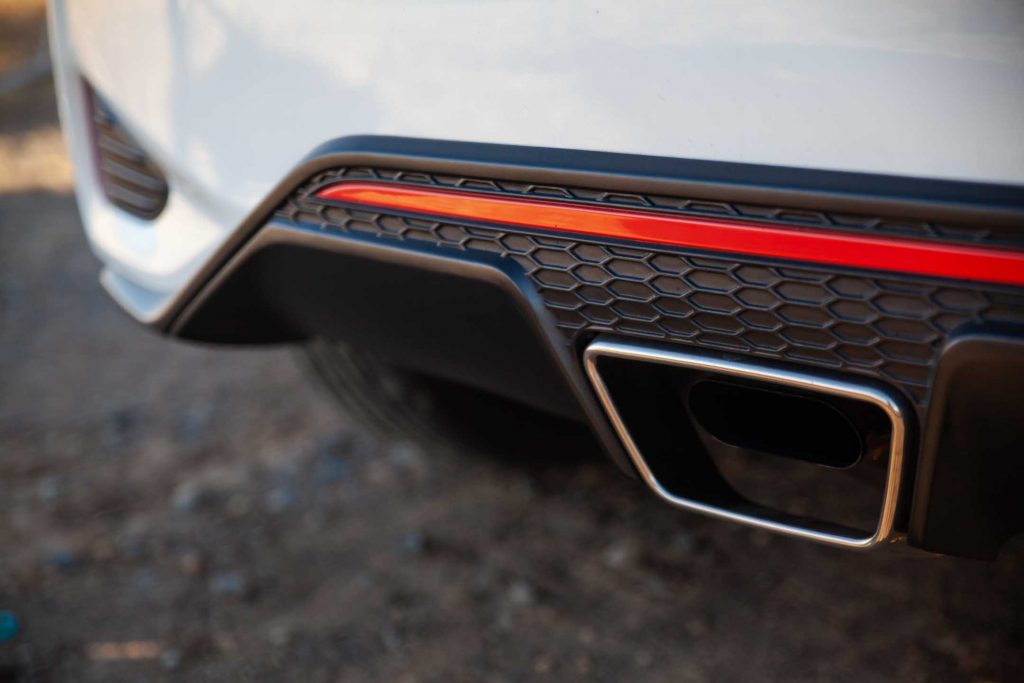 Even a lack of low-down torque and manual gear-shifting doesn’t deter it, and the GRMN reaches 100 km/h in around 6.5 seconds. Once the blower is on song, it really stretches its legs, completing the standing kilometre in only 27.2 seconds – faster than all comparable hatches.

The handling traits of both the GTI and the GRMN (as its name implies) was honed on the famous Nordschleife. With a stiff chassis and larger front roll bar, shorter springs (giving it a 24 mm-lower ride height), Sachs shocks and a Torsen limited-slip diff the Yaris has razor-sharp reactions, and its rail-like turn-in behaviour must be experienced to believe it.

Karsten Schebsdat developed the suspension settings of the slightly heavier, high-specced PoloSchebsdat, the man also responsible for the handling traits of the fantastic Golf GTI Clubsport. While not as sharp as the Yaris on turn-in, it feels well-planted mid-corner, developing some easily manageable understeer when pushed too hard.

While not available locally, the Yaris GRMN showcases what Toyota is capable of in the performance field. It is a fast and fun hatch, and its slick manual gearbox and no-frills handling qualities invoke memories of Toyota’s hot hatches of yore. The new Polo GTI, available from R381,500, is an attractive prospect in the hot hatch segment, but be warned; desirable options (and there are a few) will push its price up considerably.

All things considered, the Polo is now, in essence, the new Golf GTI, while the Yaris GRMN is a modern, more focused reincarnation of the 1980s Conquest RSi.