Even in times of austerity, a ‘bakkie’ is a South African status symbol. Whether traversing the pavement at the kids’ school, or tackling the bush in your double cab, ‘bakkies’ take us everywhere and anywhere, and in increasing style. The D-Max X-Rider is Isuzu’s answer to the call, and we took it for a bit of a spin, up north.

Strange how things sometimes work out just the way they should. In a bit of a scheduling windfall, I was recently granted the opportunity to drive the Isuzu D-Max X-Rider 2.5 TD Black double cab manual back-to-back with its new automatic sibling, just in time for a pre-lockdown weekend jaunt to Limpopo.

Truth be told, having spent a week with the manual version of Isuzu’s now ancient 2.5-litre turbodiesel bakkie, I wasn’t exactly relishing the prospect of the automatic version.

Yet, I was in for a surprise.

Where the manual X-Rider felt disappointingly underpowered and cumbersome in eastern Pretoria’s tight urban environment of shopping mall parking lots and omnipresent speed humps, the newly-introduced five-speed automatic put each of the Isuzu’s eight-year-old 2.5 mill’s 100 kilowatts and 320-newton metres to much better use than I ever could.

Granted, I spent more time on the open road heading out to Polokwane on the N1, than I did in the manual, but even in town, there was a marked difference in smoothness and capability from the auto.

ON THE OPEN ROAD

There is a seemingly unstoppable migration to automatic drivetrains in South Africa, and bakkies are no exception, at least not in the leisure segment. Driving between Pretoria and Limpopo early one Friday afternoon, the X-Rider confirmed again why this is the case.
Nevermind the stop/start traffic of the city, the N1 with its tollgates and usual weekend traffic can be a wearisome place when you’re piloting a three-tonne manual double cab behemoth.

This time around, however, the automatic X-Rider hurrying me toward the bush, was an absolute breeze, easily cruising at 125 km/h at a consistent 2,400 r/min. With cruise-control activated nearly all of the way, the X-Rider returned a steady 9.1-l/100 km combined, with that number increasing to 9.7-l/100 km in urban areas.

While a full 1.0-l/100 km higher than Isuzu’s stated combined figure, I’ve seen reports of the same X-Rider tester returning as high as 10.2-l/100 km in the hands of other journalists. All depends on load factor and weight of the right foot, at the end of the day.
Handling is as expected from a double cab – unladen it is bouncy in the rear and somewhat top-heavy around the bends. Pop up to four passengers in it, and your weekend gear in the back, and the ride becomes smoother, and the X-Rider feels more planted.

Compared to its most prominent rivals, the 2.4 GD-6 Hilux and 2.2 TDCI Ranger (110 kW / 400 Nm and 118 kW / 385 Nm), the X-Rider’s 100 kW / 320 Nm power statistics are uninspiring. And this is most notable in the sluggish manual version. Somehow, though, the automatic doesn’t suffer the same fate. While it may not move as spritely as its competition in a dash to the traffic light, it conquers the open road with ease, and with reasonably little engine noise intrusion into the cabin. 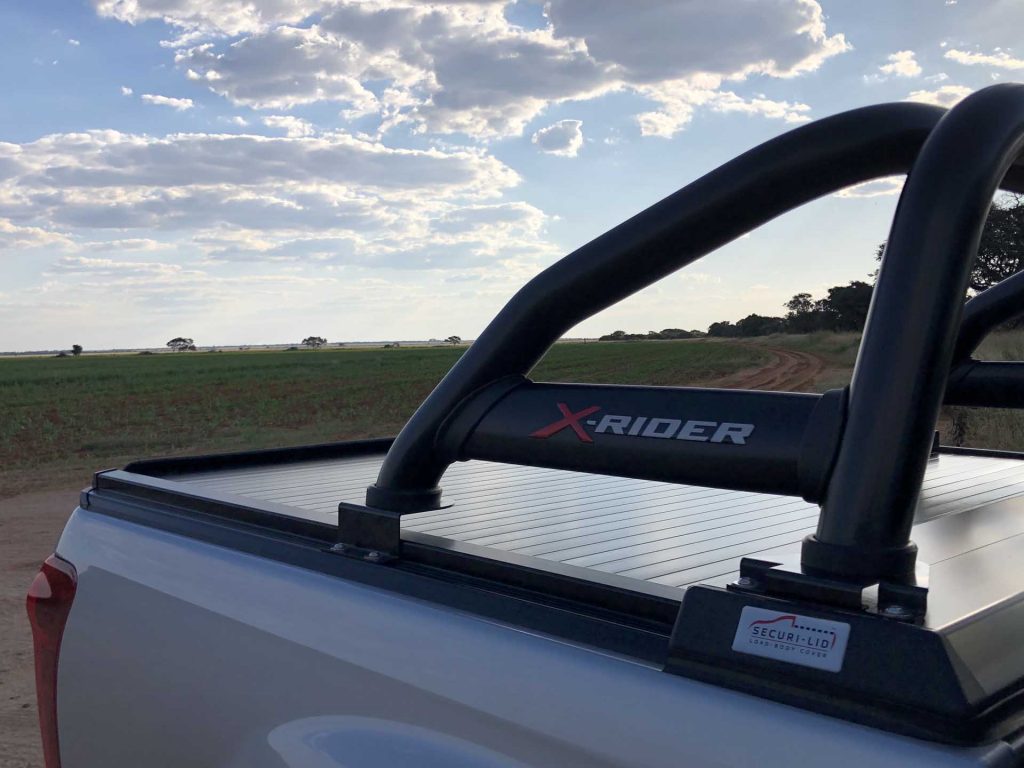 The X-Rider is a notch above Isuzu’s entry-level Hi-Rider leisure bakkie, and gets several niceties thrown in for what is very reasonable money.

Originally intended to be a once-off promotional concept, the X-Rider proved so popular that Isuzu South Africa extended the line to include 4×2 and 4×4 options. Our 4×2 automatic tips the till at R474,700, and for that you get Hi-Rider spec and then some.

For a start, 255/R18 tyres are standard on the X-Rider, and specialist red ‘X-Rider’ decals and piano black front-end treatment raises the truck’s visual appeal, while the cabin gets a serious upgrade as well. 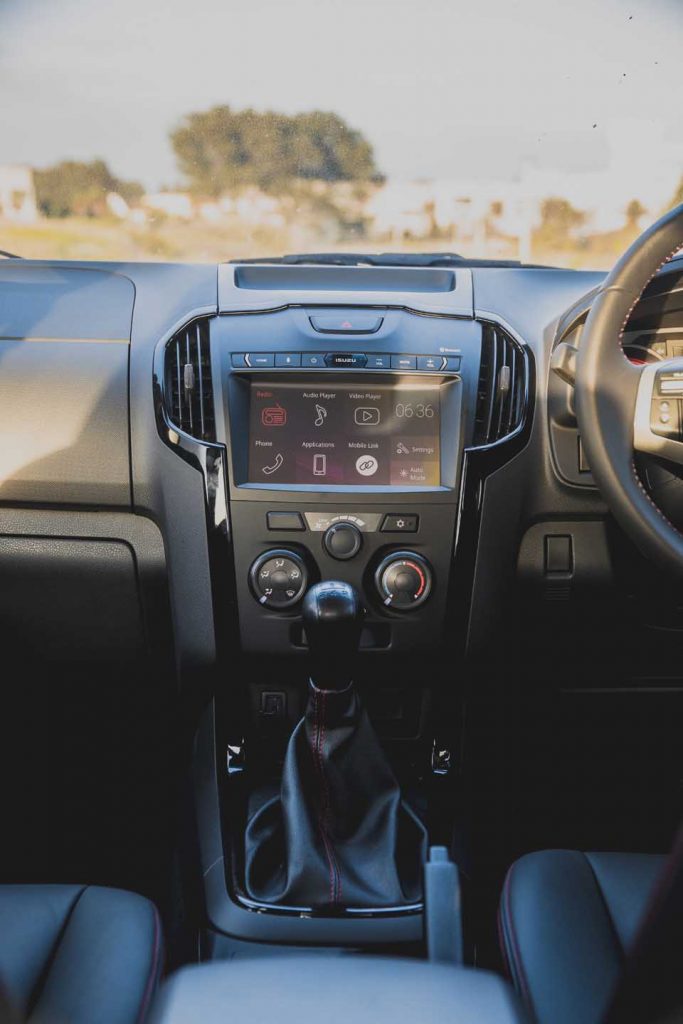 The X-Rider logo is emblazoned on almost everything inside the cabin, from the doors to the doorsills, the front seat headrests, and various other spots. Red stitching is also used for the leather-trimmed steering wheel, which boasts a red Isuzu badge. Piano black trim on the vents, radio and front console give the cabin a modern and sophisticated touch, with the same treatment used on the door trim inserts that incorporate a red “X” in keeping with the theme.

An 8” AX2 touchscreen infotainment system with Bluetooth for audio streaming and hands-free calling is available as standard. Also included is Apple CarPlay and Android Auto.

Steering mounted controls for the infotainment system and cruise control are a welcome additional touch.
Conspicuously, and unfortunately, absent from the package are rear-mounted parking sensors and camera – an absolute must for such a large vehicle.

Having a trustworthy leisure companion at your side is a must for every adventurous South African family, and the Isuzu D-Max X-Rider is very much that. My excursion to the Lowveld may have been a short weekend affair, but it was made all the more sweet in the auto D-Max X-Rider.

Sure, it’s dated engine could do with a complete overhaul (Isuzu reckon they will be ready to begin local production of an all-new D-Max by 2021), but it does superbly well what you would expect from a tough-as-nails off-roader.
The D-Max is South Africa’s third favourite bakkie and it’s easy to see why. Those who drive them love them, and I’d be happy to bet my own cash on that premise anytime.