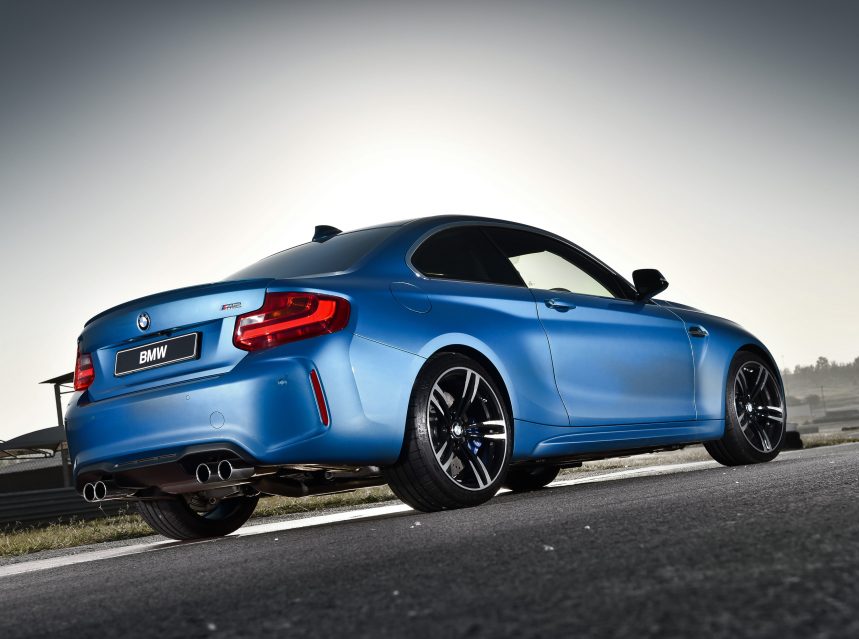 With BMW’s evolutionary, and often understated styling “adjustments”, one may be forgiven for regarding the stunningly efficient M2 Coupé as a mere sedan. It could play such a role, but also so much more, if called upon.

Under its skin, this direct heir to the successful 1 Series M Coupé pays tribute to the brand’s sporting heritage. Discrete features such as its lightweight aluminium sports suspension, a low front apron with large air intakes, muscular flanks, and 19″ alloy wheels allude to this.

The traditional BMW engine configuration – a straight-six – has been developed and refined to a point where one wonders how many more kilowatts one will be able to squeeze out of it. Featuring sports car must-haves such as a 3-litre twin cam, twin turbo engine which effortlessly brings forth 272 kW and 465 Nm of torque, it is no surprise, then, that the M2 Coupé will reach a top speed of 270 km/h, and will cover the 0-100 km/h sprint in just 4.3 seconds. This is right up there with true blue Porsche and Ferrari sports cars. When driven more sedately (and kitted out with the optional M double clutch automatic transmission), it is possible to record fuel economy figures as low as 7.9 l/100 km, according to BMW. The interior architecture also makes a bold statement with its driver focus and flawless ergonomics. The perfectly shaped sports seats, in black leather with blue contrast stitching and an M logo in the back rests, add further style to the vehicle. Adjustable side bolsters on the seats hold the driver and front passenger firmly in place around fast corners, such as those experienced during launch at the L’Ormarins racetrack near Franschhoek.

M2-specific instruments and dials feature a speedometer reading to 300 km/h, and a rev counter reading up to 8,000 r/min. To keep all this power under control, especially in the hands of amateurs, BMW engineers have redeveloped the M2 Coupé to new levels of safety and reliability. The brakes, for example, are a product of motorsport, are easy to spot – being painted in blue – and guarantee excellent deceleration, such as one would require on a racetrack, as well as additional levels of safety under normal conditions. These M compound brakes were a revelation on the track, and impressed with their resistance to fade and heat.

To further emphasise the dual nature of this all-rounder, the steering has two settings – Comfort and Sport/Sport+ – which also adjusts engine behaviour. In the past, electric power steering often lacked “feel” with regard to road surface feedback. In the M2, this problem has been overcome, providing the car with a unique dual personality, perfect on the road and on the track. Providing concentrated power and a casual, understated charm, the BMW M2 Coupé offers discerning owners the perfect gateway into the world of BMW M cars, a category which, in the past, has not always delivered what has been promised or implied. The arrival of the M2 has changed all that. It has an impressive on-the-road presence from any angle, and not only promises, but also delivers on strong track performance and super comfy long-distance touring capabilities.

In the tradition of BMW sports coupés, the M2 contains several stylistic references to highlights from its forebears – notably the 2002 turbo and the legendary 3.0 CSL – thereby spanning four decades of racing and touring history. Those were the cars which made BMW great, and the M2 Coupé is set to add to the legend of M.