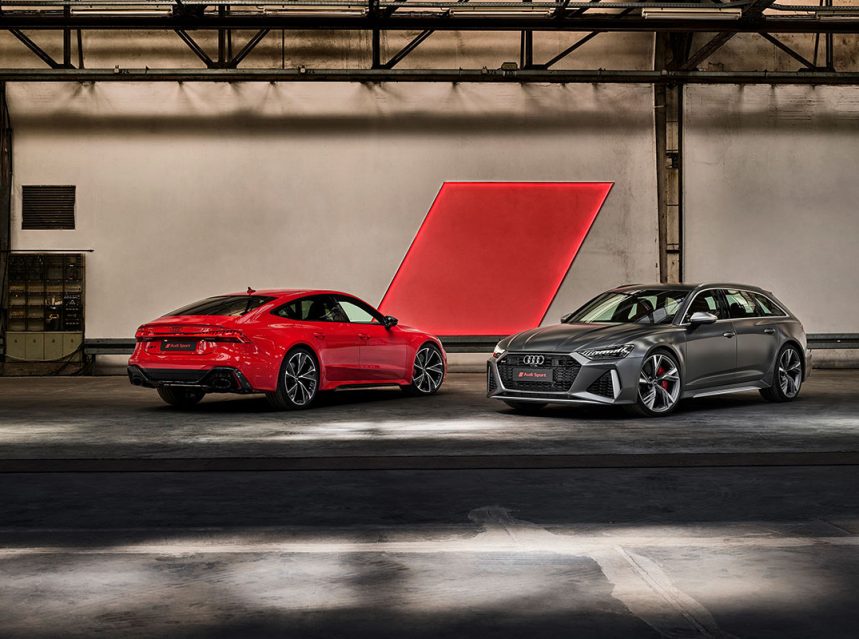 Go big or go home. Nothing embodies this statement more accurately than Audi launching 15 new vehicles at once. Usually, car manufacturers spread out their car launches to allow each model to make an impression without being overshadowed by the others. However, with the Covid-19 restrictions having derailed numerous plans worldwide the last year, Audi was unable to launch a few of its latest performance vehicles in South Africa. We all waited with bated breath as the remainder of the Western world were privy to these. Now that some form of normality is returning to the world, Audi has wasted no time launching their performance vehicles in South Africa.

The Audi performance vehicle catalogue has grown extensively over the years, with the R and RS treatment being injected into virtually every model line. This is evident with 15 new and refreshed models landing on our shores. We were treated to performance SUVs; the SQ7, SQ8, the RS Q3 and its Sportback counterpart, and the almighty RS Q8. In the sedan category were the RS5 Sportback, the RS7 Sportback and the range-topping S8. The TT RS Coupé and Roadster also made their way to our shores, along with the infallible R8 Coupé and Roadster for those who require performance in unfiltered sports car and supercar flavour.

For the Audi SUV fans, Audi launched the SQ7 and SQ8 alongside the RS Q3 and RS Q3 Sportback and the halo RS Q8. The RS Q3 is equipped with Audi’s famous smooth turbocharged 2.5-litre inline five-cylinder engine producing 294 kW and 480 Nm. It sounds dreamy, too, given the five-cylinder exhaust reverberating with a vague V10-like undertone. Boasting premium performance figures, this beast also has the good looks to match, garnering the name “baby Urus” in some motoring circles. In terms of sheer character, there appears to be nothing in this category capable of holding a torch to the RS Q3. Pricing commences at R1,094,000 for the RS Q3 and R1,128,000 for the Audi RS Q3 Sportback.

A few rungs up the model ladder, the SQ7 and the SQ8 TDI are essentially the same vehicle, although the SQ8 is Audi’s coupé variant of the latter. Powered by a twin-turbo 4.0-litre V8 diesel engine producing 310 kW and a phenomenal 900 Nm, these brutes are geared for the diehards who refuse to settle for the complete petrol RS treatment. The SQ7 pricing commences at R1,679,500, with R1,848,500 for the SQ8 TDI Quattro.

Enter the RS Q8, the halo SUV in the Audi stable. If the SQ8 sounds interesting, then this model will blow your socks off. Powered by a petrol 4.0-litre twin-turbo V8 engine, the RS Q8 is dynamic in every sense of the word, with power figures boasting a remarkable 441 kW and 800 Nm.

Despite its size, the RS Q8 can sprint from 0 to 100 km/h in a mere 3.8 seconds! The RS Q8 is branded “the budget Urus” on the streets and for valid reasons. Compared to its Italian cousin, the RS Q8 is powered by the same VAG V8 engine, albeit slightly detuned, is built on the same platform, and priced relatively cheaper at R2,354,500 (emphasis on the word “relatively”).

In the highly competitive performance sedan sector, Audi stands at the forefront with the launch of the RS5 Coupé and Sportback, the stately S8 and the brutish RS7 Sportback.

The RS5 Coupé and Sportback hold the fort in the performance mid-size sedan category, as a solid competitor to the BMW M3 and the Mercedes-AMG C63. Boasting a twin-turbocharged 2.9-litre V6 unit producing 331 kW and 600 Nm, this model refresh should keep Audi fans satiated in anticipation of the next-generation RS5. The RS5 Sportback starting price commences at R1,409,500.

In this all-encompassing category, the suave S8 is a successful combination of brute force and elegant styling. Sporting a twin-turbo V8 boasting an output of 420 kW and 800 Nm torque, this sizable sedan is deceptively quick and will undoubtedly be able to compete with any high-performance sports car aiming to challenge this beast at a traffic light. This model is undoubtedly the most comfortable performance vehicle in Audi’s impressive arsenal of performance cars, inclusive of predictive active suspension, which uses cameras to analyse the road and precondition the suspension accordingly. Flaunting luxurious interior inclusions complemented with state-of-the-art technology, the Audi S8 comfortably competes with the BMW M760i and the Mercedes-AMG S63. Audi’s top of the range has an asking price that starts at R2,484,000.

For those who deem the S8 too mature and restrained, the option of the RS7 presents itself with conspicuously aggressive styling and powerful performance. Casting a gorgeous silhouette with styling that perfectly complements its savage performance, the RS7 has earned the title of “supercar killer” in the motoring journalist fraternity. With its sonorous twin-turbo 4.0-litre V8 producing 441 kW of power and 800 Nm of torque, the RS7 demands a more significant share of the market currently dominated by the Mercedes-AMG E63 and the BMW M5.

The allure of the Avant

Audi recently introduced the refreshed RS4 Avant and the brand new RS6 Avant to the South African market (finally!). Effectively, the only station wagon option in its category, the RS4, includes the same V6 engine that powers the RS5. Positive feedback follows the RS4 from Europe, where it is considered the perfect daily commute for petrol heads, striking a great value proposition between performance and practicality. Starting price is set at R1,296,000.

The RS6 Avant is essentially the same as the RS7, but with more practicality and more substantial road presence. It is mechanically identical to its Sportback sibling, and so it shares the dynamic all-wheel steering, adaptive air suspension and twin-turbo 4.0-litre V8. Sporting attractive styling and flared wheel arches, this sporty station wagon is sure to be seen and heard. The asking price for this beauty commences at R2,070,000.

Sports car enthusiasts will be delighted to get their hands on the refreshed Audi TT RS and the TT RS Roadster. Sharing a turbocharged 2.5-litre five-cylinder engine with the RS Q3, this classic sports car produces 294 kW of power and 480 Nm of torque that propels it from 0 to 100 km/h in 3.7 seconds.

Given its performance figures, coupled with its refreshed exotic appearance, the TT RS represents a more refined version of the almighty R8. Pricing for the Coupé starts from R1,062,000 and R1,113,500 for the Roadster.

Proudly elevated to the peak of the Audi model lineup, the R8 Coupé and R8 Spyder are powered with a naturally aspirated Lamborghini-derived 5.2-litre V10. Churning out 449 kW of power and 560 Nm of torque, the R8 is capable of rocketing from 0 to 100 km/h in 3.1 seconds while leaving spine-tingling V10 thunder in its wake. To some extent, the R8 is a perfect alternative to the Lamborghini Huracan, with which it shares an array of mechanical and electrical components. The Coupé starting price commences at R3,336,000 while the Spyder commences at R3,592,500.

Staging a launch event of this magnitude represents logistical challenges on a different scale, but Audi outdid themselves. The cyber-world, in conjunction with the motoring journalist fraternity, is abuzz with excitement. Audi has created hype, and we all know how hype is the best marketing accelerant. Audi fans and competitor German marques are all waiting expectantly to get their hands on these new models to ascertain how they stack up in the German pecking order. This is all playing into Audi’s hands, as the Ingolstadt brand forges ahead to claim the lion’s share in the performance vehicle segment in South Africa. With Audi making its performance vehicles accessible to 20 more dealerships locally, it is only a matter of time before we see an increase in sales volumes for the Audi S, RS and R models, to thundering applause from the cars that create their own thunder.