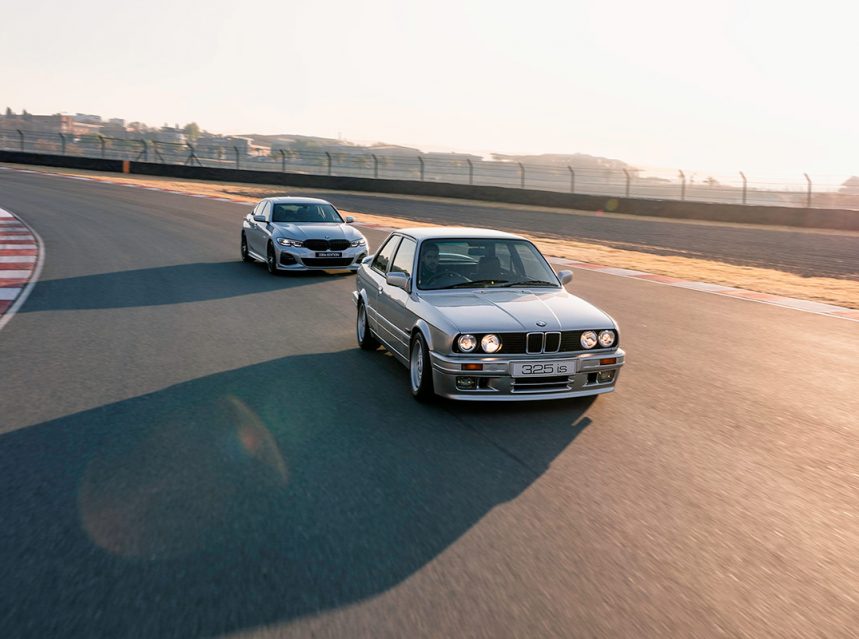 How do you follow a class act? How do you honour a legacy that garnered a cult following in its wake without provoking old school purists? How do you use modern technology to capture the old magic that spawned a legend? All extremely tough questions that we hoped to answer when we were handed the keys to the new BMW 330iS Edition.

A Stroll Down Memory Lane

To some, the 330iS Edition might appear to be another special edition marketing exercise for BMW. However, to those in the know, this car is a tribute piece to the legendary 325is (‘is’ standing for injected sport), which is more affectionately known in street speak as the original “gusheshe”. Having been engineered to compete in motorsport, the 325is was a driving masterpiece powered by an Alpina-tuned 2.7-litre in-line six-cylinder engine. Released to critical acclaim, the 325is was forever etched onto the parchment of our automotive history.

Exterior Impressions of the Homage

With a limited run of 230 models (all exclusive to SA), the 330iS will undoubtedly be a pretty rare sight on the streets. Adorned with the M Sport package as standard, the 330iS sports a track-inspired front splitter, side skirts, M performance boot spoiler, and an M performance exhaust. The car rides on gorgeous multi-spoke 20” alloys that barely hide the blue M Sport brake callipers behind them.

Taking inspiration from the 325i Shadowline of the 1980s, BMW treated the 330iS to a BMW Individual Shadow Line package that replaces some exterior fixtures with gloss black variants. Take note of the black kidney grille, window surrounds, and darker headlights which all make the car look menacing on the road. The car also benefits from a 10 mm drop of the sports suspension, which gives it a purposeful stance. There is also a 330iS Edition badge added to the boot lid. All these special touches work well with the choice of paints on offer that includes Melbourne Red, Black Sapphire, and Alpine White. The 330iS definitely looks mighty special, and I can only hope the aftermarket aficionados do not flood the streets with knock offs of this beauty.

The interior of the 330iS is also a familiar sight. Not much has been changed from the 3 Series cabin, save for a few touches that serve to remind you that you are not in the standard car. On the front door sills, you will find Edition kick plates to welcome you into the cabin. Inside, the Vernasca leather seats with contrast stitching look fantastic, and the seatbelts have a tasteful touch of colour from the M tri-colour stripes. You also get an M sports steering wheel that adds to the sporty feel of the cabin. If the black leather is too dark for your taste, the electric sunroof will add some light to the cabin. It goes without saying that this interior is a winner. The driver-centric cockpit is right up there in class with its main rivals from Audi and Mercedes-Benz.

The 330iS also features a host of technological amenities, coming standard with gesture control for the infotainment features, wireless phone charging, Connected Package Professional, and BMW Live Cockpit Professional. Audiophiles will also revel to the tunes of the Harman Kardon sound system, which also comes standard.

Cabin space is really good for the segment, providing ample room for five passengers. This has to be one of the few payoffs of the continuously increasing dimensions of the 3 Series body.

Does the Performance Do Justice to the Legacy?

Yes and no. Unlike the 325is, which was built on a top of the range model at the time, the 330iS builds on the middle of the range one. This means that this special edition model is powered by a 190 kW 2.0-litre four-cylinder petrol engine. I am somewhat baffled as to why BMW didn’t go all out and add the trusty B58 six-cylinder from the 340i. That engine has already proven its worth in all applications and would have been the perfect revival of the 325is tribute. Having said this, the four-pot 330iS engine is no slouch, thanks to a twin-scroll turbocharger. BMW states that the dash from zero to 100 km/h is over in just 5.8 seconds. It sounds rather fruity, too, with all the right crackles and pops in all the right places.

BMW gave the 330iS a stiffer Adaptive M Sport suspension, which aids the vehicle in handling its mass around corners. Through the Driving Experience Control system, the driver can set up the suspension to best suit their driving style in different conditions. The suspension also works in tandem with the variable sport steering, which can be configured to suit the driver’s demands. All these features translate to excellent driving dynamics on the road. The rear wheels will let loose into a glorious oversteer for some tail-happy antics in the right circumstances. After all, what is a gusheshe if it won’t eagerly light up its rear tyres on command? The ride quality is, however, a little hard given the sport suspension, but it is a good enough trade-off for the way the car handles.

There is, sadly, no manual option, which is quite odd given that the 330iS is an ode to an analogue masterpiece. I fear it slightly ruins the chances of making the 330iS a desirable collectable like its forebearer. Regardless, one can salvage some of the lost driving engagement by manually shifting through the gears via the snappy steering wheel-mounted pedals.

I walked away from the 330iS with mixed feelings. As a standalone product, the car is a fantastic package. It looks great and is mighty fun to drive. However, given that this car is a homage to the 325is, I feel it comes up just that little bit short. BMW made its history on straight-six engines, and so, naturally, the tribute vehicle should have been powered by one. Also, given how driving focused the 325is was, a manual transmission should have been a serious consideration to maximise driver involvement. That said, the 330iS Edition is a fun car, and those who are lucky enough to own one will likely remember it well into the future. Just like its ancestor.