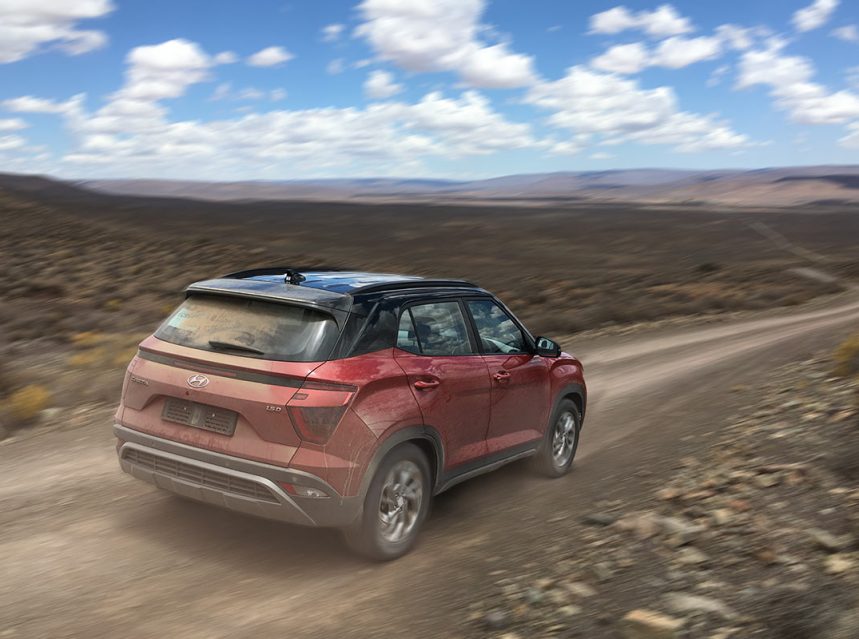 During the December holiday period, Ferdi de Vos traversed the vast expanses of the country’s largest province and the Orange River (Gariep) running through it in a new Hyundai Creta.

The glaring eye of the Khi Solar One solar plant, becoming brighter as we got closer, “watched” our approach into Upington on the R27 from the South. And as I looked at the dazzling spire, I could not help but imagine the ominous voice of the evil Sauron from Tolkien’s Lord of the Rings trilogy.

The giant reflector on top of the 205 m-high pylon certainly reminds one of the giant flaming eye controlled by the “dark lord”. Its presence is intimidating, as “the eye” seems to follow you – making you wonder, for a moment at least, if it does not, perhaps also have the power to expose your dark inner thoughts.

Khi Solar One (KSO), the first concentrated thermal solar power plant in Africa, stands like a sentinel over Upington and its surrounds and can be seen as far as Keimoes. It covers 140 hectares and has a solar field of more than 4,000 heliostats, mirroring solar energy towards a boiler located on top of the central tower.

Still, it is not the largest solar power plant in the Northern Cape. No, the KaXu Solar One (KXSO) project, located close to Pofadder, is even bigger, covering 1,100 hectares with a collector surface of more than 800,000 m2.

Before Keimoes, we turned off onto the R359 towards Kakamas, driving past a myriad of green vineyards and grape farms producing sun-dried raisins and sultanas. We followed the swollen Orange River towards our destination, the town of Augrabies and the Avonsrus guesthouse – an old farmhouse turned into a beautiful cottage by the Conradie family.

Our freshly registered new Hyundai Creta (still on paper plates) was dusty and dirty after a journey of more than 850 km. Even so, the two-tone colour scheme of its striking exterior, and design with traces of the styling DNA of its bigger Tucson and Santa Fe SUV siblings, stood out.

The first-generation Creta, launched in 2017, was an immediate volume-seller. In total, 14,811 units were sold before the new model range – with five derivatives and two specification levels – was introduced late last year. Soon after this, we received a Creta 1.5 Diesel Executive for our trip to the Northern Cape.

Visibly larger than its predecessor, its smoothly creased hood lines, bold new grille, and unusually shaped headlights, with the daytime running lights above and to the side of the cluster, makes a dramatic first impression. Viewed from the side, the new styling upgrade is impressive, though the rear, with taillights repeating the design lines in the front, is a bit of a mess, in my view.

The original Khoikhoi people named it Ankoerebis – “the place of big noises” – and legend has it that the biggest cache of diamonds in the world still lies in the swirl-hole eroded into the granite at the foot of the thundering waterfall.

The Augrabies Falls in the similarly named national park (established 55 years ago) was our first stop the next morning, and even though we did not see it when it was at its peak, the waterfall –

After our visit, we backtracked to the N14. We then drove to Kakamas for breakfast at the Pienk Padstal (trading as Die Koker Kombuis) before visiting the restored Persian waterwheel in Keimoes, still in use on an irrigation canal along the main road.

Interestingly, the name Keimoes as translated from Khoekhoe apparently means “large eye” – seemingly referring to a natural water fountain in the town called Big Eye, or perhaps the vast views from the Tierberg (but ostensibly not the “evil eye” of Khi Solar One).

After filling up in Upington, we started the long trek on the N14 to Gauteng. The new 1.5-litre four-cylinder turbodiesel engine in the Creta pushes out a healthy 84 kW at 4,000 rpm, and at cruising speeds, it was smooth and quiet due, in part, to the well-chosen ratios for the six-speed auto transmission.

With 250 Nm of torque delivered from a low 1,500 rpm, the compact Hyundai SUV pulled well at lower speeds, but at higher speeds, it ran out of revs quickly – making it necessary to plan your overtaking manoeuvres on single-lane roads early. However, it never felt underpowered or breathless.

Returning from Pretoria, we decided to follow the route to Kimberley and then the Gariep (Orange River) on the R357 past the picturesque little town of Douglas to overnight in Prieska. Once past the Diamond Capital, there was no traffic on the road, and our progress was brisk.

After good rains, the Karoo was spectacular and admiring the lush and green scenery shortened the long, straight road to Prieska considerably. The inviting, quite spacious cabin of the Creta, with good air-con and enough cup holders and USB ports to keep everyone happy, contributed to this. However, the light grey trim for the seats and instrument panel is unfortunate, as it gets dirty quickly and is a pain to clean.

Situated on the south bank of the Orange River, Prieska was initially used by migrating farmers when the pans were full after rains. Its name was derived from Korana and means “place of the lost she-goat”. The town is dominated by a unique blockhouse on the hill built during the Second Boer War from semi-precious tiger’s eye stones. Traversing the gravel road up the hill to the blockhouse, the ride quality of the Creta was firm yet comfortable, even on its 17” tyres. It felt stable and sure-footed on both tar and gravel, while noise levels and vibration were much less than its predecessor.

It was frugal, too, averaging around 6.4-l/100 km on our 3,500 km round trip, compared to the 5.9-l/100 km claimed by the manufacturer. Oh, and the tyre pressure monitoring system worked well, giving us early warning when we picked up a slow puncture on a rutty Karoo road.