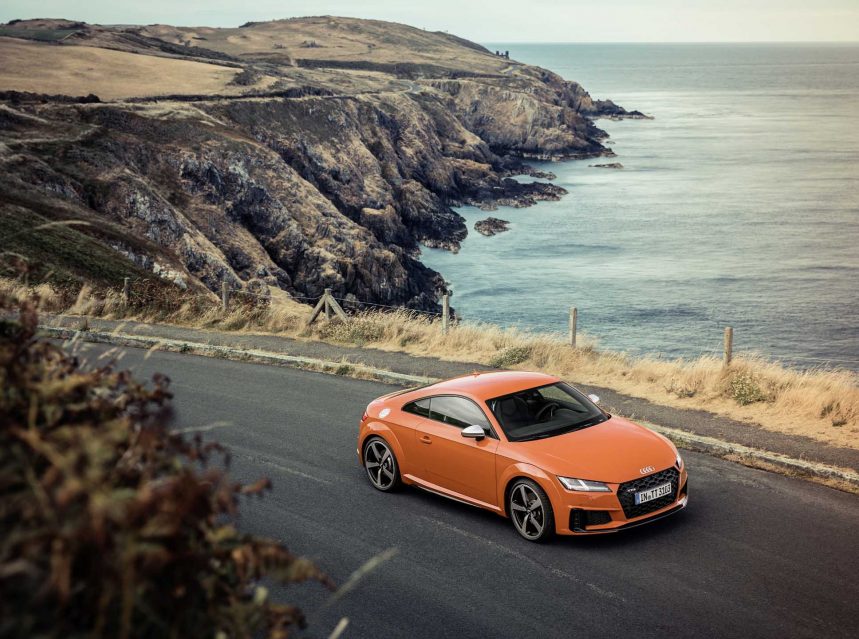 A crowd of excited matriculates whip out their smartphones and gingerly loiter around the parking lot craning their necks to catch a glimpse of my tester car and its occupants. It’s the stunning orange Audi TTS and as we come to a standstill, there are shrieks of excitement.

A few loud revs, some pops from the sports exhaust followed by some cheers as I drive off holding an imaginary Dad of the Year award as I dropped my daughter off at a prominent function on the school’s calendar.

When the Audi TT initially launched, it was shunned by petrol heads for its soft feminine looks. However, over the years Audi listened and chiselled away at those looks and made the TT more appealing to the masculine gender. Now in the 2019 model, especially in TTS guise, it looks amazing.

A new angular honeycomb mesh grille dominates the front of the car, flanked by Audi’s signature light clusters and aggressive air intakes. The rear looks fat and squat, accentuated by a sporty diffuser and quad exhaust pipes. The term “baby R8” has never been closer to the truth.

The TTS comes with a four-pot 2.0-litre engine making 228 kW and 400 Nm. This is good for zero to 100 km/h in a claimed 4.5 seconds. Whilst I never timed myself, hard accelerations always felt mighty fast. For a spot of context, the TTS is only roughly half a second slower to 100 km/h than a 5.0-litre Ford Mustang GT!

It is seriously quick and quite vocal about its business, though not as throaty as the spine-tingling 5-cylinder song from the range-topping TT RS. Assisting the car to get those impressive figures is a quick 7-speed dual-clutch transmission and Audi’s fabled Quattro system providing the trademark traction.

Throw a twisty road at it and you will be nothing short of entertained by the Audi’s quick steering system. It also rides smoothly thanks to magnetically controlled dampers simultaneously providing just the right amount of comfort and minimal body roll.
Mind you, this whole package is constructed around the same architecture as the Golf 7. There was little to no chances that the TTS was going to drive badly given the positive reviews surrounding the GTI.

The best part about the TTS, however, must be the new driver-focused interior. Gone is the centre dash infotainment system which has now been incorporated in the driver’s virtual cockpit screen. You also find a pair of comfortable leather seats, high-quality soft-touch materials and aluminium bits adding to the premium feel of the cabin. The cabin also has ample seating space for two adults and there is reasonable storage in the boot.

Judging by the excitement I generated at the school’s event, and how the car generally made me feel, I can say with certainty that Audi has the right formula with this one. That is what a sports car is all about, isn’t it? Making you feel great behind the wheel and spreading excitement to people around you.

And with Audi having announced that this is possibly the last TT generation to have a fuel-powered power plant, it was a bit of a bitter-sweet occasion for me driving it for a few days. This could be the last of the TTs as we know them – a bit ironic since this little development was only announced as I was won over.