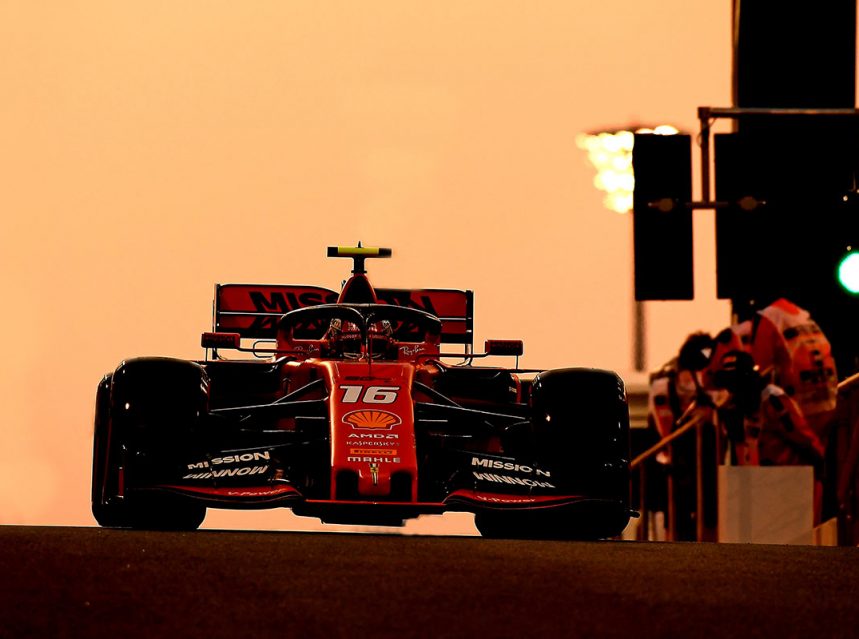 Having clinched the F1 world title for the sixth time in 2019’s penultimate race in Brazil, Lewis Hamilton had free reign in Abu Dhabi to clock up another emphatic Grand Prix victory, the 84th of his illustrious career. Back at the ranch, though, Ferrari was in the thick of F1 shenanigans again.

And so the 2019 F1 season drew to a close in Abu Dhabi, with Lewis Hamilton clocking up another hugely impressive victory – his 11th of the year and, once free of the pressures of chasing titles, also one of his most dominant.

Ten championships then, between Hamilton and Vettel, and their tally of 2019 poles equalled by young Charles. That’s impressive for a guy who only turned 22 this year.

Abu Dhabi, though, was not a case of smooth sailing for the young Monégasque. He out-qualified teammate Vettel once again, but the No. 16 Ferrari was good for fourth on the grid only.

That became a start line slot of third when pole-sitter Hamilton’s teammate, Valtteri Bottas, was demoted from second to last, courtesy of an engine replacement.

This little bit of good news was off-set, again, by news from the FIA’s F1 technical delegate, Jo Bauer, that an inspection done on the volume of fuel in Leclerc’s car shortly before the race would be referred to the stewards, for later consideration.

The fuel regulations specify that teams should, prior to the race, declare the amount of fuel they intend to put in the car for the lap to the grid, the formation lap, the race, the in-lap and any fire-ups that would be needed – and on Car No. 16 Ferrari had understated the volume of onboard fuel by 4.88 kg.

Why is this important, then?

Well, nowadays, F1 cars are allowed a maximum of 110 kg of fuel per race. Fill up the tank with more, and such a car can burn off more fuel – yielding more power – during the course of the race.

Ferrari, in the grandest of operatic Italian ways, played – or feigned, we would never know – innocence. They claimed that their calculations remained true, even after the race, when the fuel remaining in Leclerc’s car tallied with the original declaration.

The FIA differed and slapped a 50,000 euro fine on the team, without penalising Leclerc, who finished third, behind Hamilton and Verstappen.

Red Bull’s Helmut Marko called the penalty “a joke” and there are signs that Marko’s concerns carried some water. After Spa and Monza – where the superiority of Maranello’s power unit was most obvious – Mercedes-AMG team manager Toto Wolff had this to say:

“Right now, Renault, Honda and ourselves are at about the same level. Only Ferrari stands out, and in a pretty serious way.”

Ever since Silverstone 2018, various theories have been floated as to the Ferrari’s power advantage. Ahead of Singapore this year, Red Bull’s Christian Horner admitted that his team had queried the FIA.

And in Austin, a new FIA technical directive relating to fuel flow immediately lessened the straight-line speed advantage Ferrari has enjoyed over the previous two years.

All of this led, in quick succession, to two more FIA follow-ups relating to fuel and flammable liquids. In Helmut Marko’s mind, Ferrari still had the gall to overstep in Abu Dhabi. In Austin, Verstappen even accused the Scuderia of “cheating”.

The long and the short of it all is that 2020 will dawn with all guns drawn.

Red Bull, Marko warned, will certainly be on the FIA’s case about Ferrari, whilst his own engine supplier, Honda, seems to have found their stride in F1. Combine this with designer Adrian Newey’s well-proven acumen, especially on the aero front, and Red Bull – with young gun Verstappen leading the charge – should be a potent factor.

So will Ferrari, who has learned some hard lessons in 2019, especially in terms of front wing aerodynamics.

And so will Mercedes, who has relentlessly outperformed the rest since the dawn of F1’s hybrid era.

Strap yourself in, then; 2020 will be a humdinger.

Here’s the teaser for 2021: Hamilton might move to Ferrari!