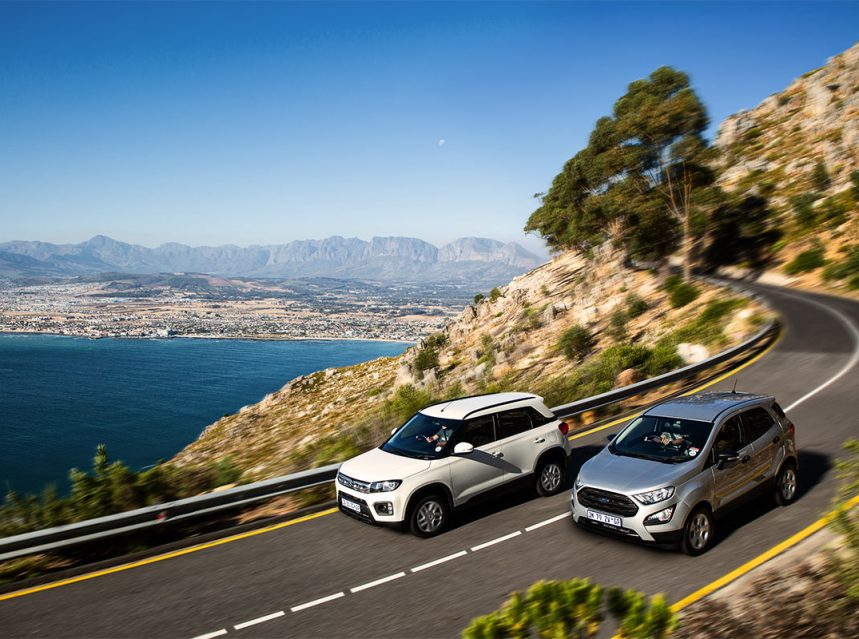 The one is the culmination of a Brazilian brainwave and Ford’s worldwide technical know-how to trailblaze a new motoring craze; the other is the product of Indian ingenuity and Suzuki expertise to conform to local requirements. But which one is best? The original subcompact SUV, principal of the genre, or the latest pretender?

The Ford EcoSport, initiated as part of Ford’s Amazon Project in Brazil 20 years ago, was initially based on the European-spec Ford Fiesta and Fusion, but the second-generation model (introduced in 2012) was developed as a unique product and pioneered the subcompact crossover market.

Since then, the EcoSport has become a top seller for Ford worldwide. It was introduced to South Africa in 2013 and received an extensive revamp in late 2018. With its third-generation successor already waiting in the wings, the local range was recently bolstered by a limited derivative, the EcoSport Black, and the petrol-powered 1.5 Ti-VCT Ambiente (on which the Black edition is based).

This entry-level derivative was brought to counter the threat of new, affordable contenders in the subcompact SUV segment, such as the Honda W-RV, Suzuki Vitara Brezza, Toyota Urban Cruiser and Nissan Magnite. With this in mind, we pitched the Ambiente against its latest challenger, the Vitara Brezza 1.5 GLX manual (although we had a GL version for photography).

It may be nearly a decade old, but the EcoSport still has a modern appearance, in part due to its signature Ford grille and the clever use of contemporary trim elements. However, its interior and dashboard design is now starting to look dated compared to its newer adversaries.

Even so, it is well-equipped for an entry-level model. Standard features include electric windows, remote central locking, a perimeter alarm, electric side mirrors, air-conditioning, a six-speaker audio system linked to Ford’s Sync system with Bluetooth and voice activation, plus steering wheel audio controls.

The instrument cluster incorporates a basic trip computer with an EcoMode indicator, and there is even a towbar prep pack to enable easy dealer fitment of the optional towbar. Safety systems include six airbags, Isofix mounting points, rear parking sensors, and manually activated ‘Follow-me-home’ headlamps.

Divergent to the understated, dark trim of the more curved EcoSport, the Vitara Brezza, with its edgier lines, utilises a profusion of chrome to make an impression. Its near-solid chrome grille seamlessly integrates with LED headlights (with a chrome brow) and LED daytime running lights, while an inverted U-shaped chrome styling bar with silver chin plate runs underneath.

The floating roof design is highlighted by a darkened A-pillar and black insert on the C-pillar, and it is pretty striking with a two-tone colour option. The rear, with a U-shaped bumper and skid plate, mirrors the front bumper design, and it is finished off with embossed chrome garnish on the rear door.

The focal point in the Suzuki’s interior is the 7” touchscreen infotainment system with Apple CarPlay and Android Auto compatibility. Like the Ford system, it can be controlled via steering buttons or voice commands, but it also displays vehicle information and alerts and acts as a reverse camera when parking (the Ford has sensors only).

In terms of safety systems, the Brezza is also on par with the EcoSport, but while it has slightly less luggage space (328 litres versus 355 litres), the Ford’s load bay is less practical, and its side-hinged rear door hampers access.

The 1.5 Ti-VCT Ambiente is powered by Ford’s lively three-cylinder petrol mill with aluminium engine block and cylinder head, twin independent variable camshaft timing, and four valves per cylinder, producing a healthy 91 kW of power at 6,500 r/min and peak torque of 150 Nm at 4,500 r/min.

Conversely, the Vitara Brezza is fitted with Suzuki’s proven but less sophisticated K15B four-cylinder engine with multi-point fuel injection and four valves per cylinder, delivering 77 kW at 6,000 r/min and 138 Nm of torque at 4,400 r/min. As in the EcoSport, power is delivered to the front wheels via a five-speed manual transmission.

The power and torque difference between the two powerplants may only be 14 kW and 12 Nm, respectively, but at low revs, it feels substantially more (even though the Suzuki has a 100 kg weight advantage) due to the Ford tricylinder’s extra twisting force. However, things even out as the revs climb, with the Suzuki mill becoming quite buzzy at high rotations.

While we did not perform official acceleration tests, the two were relatively evenly matched, and both should do a sub-13 seconds zero to 100 km/h sprint. The EcoSport’s gear shift action is more fluid than the Suzuki’s more notchy but precise cog-swops, and while both have a similar suspension setup, the softer sprung Ford displayed slightly more body roll in the corners.

With similar ground clearance and 16” tyres (with alloy wheels for the Vitara Brezza), both exhibited acceptable levels of ride comfort on broken tar surfaces, but on dirt roads, the Vitara Brezza, with its stiffer setup, was prone to more bouncy behaviour than its European-built contender. Over a 300 km run, the EcoSport had slightly better fuel consumption, using 7.2 l/100 km versus 7.8 l/100 km for the Suzuki.

So, can the original subcompact SUV still take the fight to its latest challenger? Well, yes. The punchy three-cylinder mill in the entry-level EcoSport is a jewel and contributes significantly to its excellent all-round driving dynamics. It is still a better driver’s car than the Suzuki.

That said, the Vitara Brezza comes with more and better kit, tried and trusted mechanics, a 200,000 km promotional mechanical warranty and a four-year/60,000 km service plan. Even in flagship manual trim, it costs less – R289,900 versus R303,400 for the EcoSport Ambiente.

Also, the EcoSport’s replacement is nigh, and this can affect its resale value. Taking all this into account, the Suzuki is the rational choice, however, regarded purely subjectively, the character and presence of the EcoSport still count in its favour.