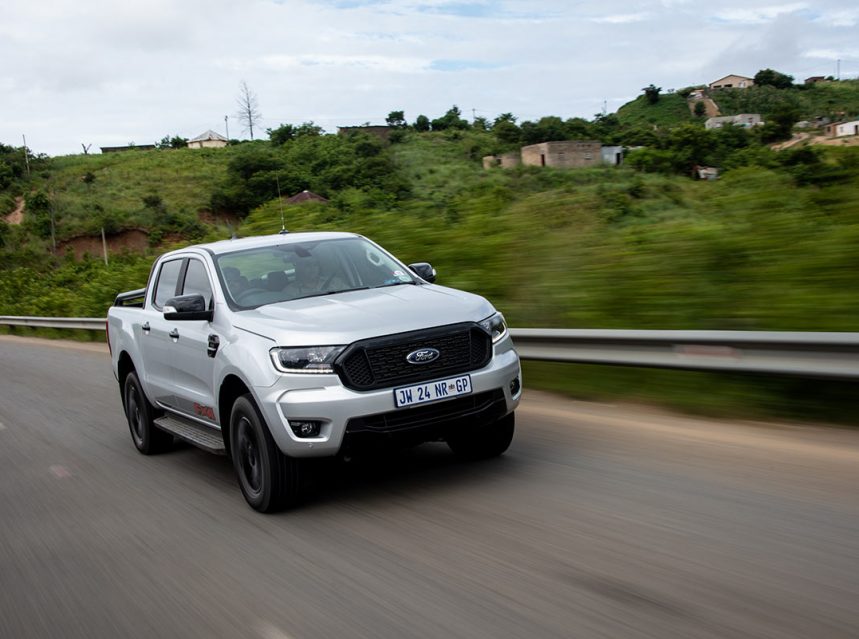 In light of the wide selection of seemingly similar models in the Ford bakkie range, you could be forgiven for thinking that the Ford Ranger line-up may be a tad too extensive. Like most manufacturers, however, Ford is capitalising on the surge in demand for lifestyle-matching vehicles, and the Ranger FX4 slots in perfectly as a mid-range option.

At the recent launch of the new Ford Ranger FX4, the assembled contingent of motoring journalists was greeted by the sight of a light aircraft that Ford had chartered for the occasion. Needless to say that a touch of anxiety set in when I thought of the flight ahead for me. Surprisingly, though, as soon as we reached an altitude of 5,000 ft above the ocean between Durban and the Wild Coast, my anxiety was replaced by a calm sense of freedom.

Perched comfortingly on the peak of a mountain, the airstrip welcomed our flying bird to a safe landing, where an array of FX4 Rangers proudly welcomed us to the launch of this latest derivative that pays homage to the Ranger’s true heritage as guardian of the forest.

The FX4 retains the Ranger’s rugged appeal that we have become accustomed to over the years, albeit now further enhanced with a host of modern finishes. Having been given the “chrome delete” treatment, all glossy trimmings have been replaced with black trim, outlining the stealthy form of this noble steed, in true thoroughbred style. The hood boasts a black mesh grille, which has been appropriated from the Thunder, minus the red inserts.

FX4 badges adorn the exterior, and to top it off, FX4 is stamped into the tailgate in rugged debossed style. An extended tubular sports bar at the rear of the load bay further distinguishes this pickup from the rest of its siblings. 18” alloy wheels complete the look, providing the FX4 with distinguished kerb appeal. Buyers have a selection of colours to choose from, including Frozen White, Sea Grey, Moondust Silver and Agate Black.

The cabin offers excellent comfort, sporting leather treatment for the seats, steering wheel and gear lever, as well as soft-touch material on the dashboard. Contrasting red stitching and embossed FX4 logos – on both the driver and front passenger seat headrests – add bold appeal to the cabin styling. The dash is embellished with an 8” infotainment system operating Ford’s SYNC 3 system, complete with Android Auto and Apple CarPlay connectivity. The cabin creates a sense of luxury on par with that of the premium Thunder and Wildtrak models.

Topping the Ranger tech, the FordPass app can be downloaded onto any smartphone device and paired with the FordPass Connect modem that accompanies the latest Ranger models, such as the FX4. This state-of-the-art app allows for instant and easy access to an array of remote features, including starting the vehicle, activating the air-conditioning system, locking and unlocking the vehicle, and much more – all via your mobile device. The FordPass app also boasts locator functionality that helps you out should you have forgotten where you parked. It will also advise you of vital info such as oil and fuel levels and service intervals. You would typically expect these kinds of features to be limited to the premium luxury segment. However, Ford is no stranger to pushing the envelope in the bakkie segment.

The FX4, available in both 4×2 and 4×4 variations, is powered by a 2.0-litre turbo diesel engine which produces 132 kW and 420 Nm of torque. Should you prefer to shift gears manually, think again, as the FX4 is offered exclusively with a 10-speed automatic transmission. The set-up is also used in bi-turbo form (157 kW and 500 Nm torque) in the Ranger Raptor, and works brilliantly to produce both solid power delivery and decent fuel consumption (7.5 l/100 km).

The FX4 performs as well as you would expect from the tried and tested range. The vehicle is comfortable and undeterred by undulating terrain. Being an automatic, it is a point-and-shoot affair, and even off-road novices can experience the ease with which the FX4 tackles the great outdoors.

Following a four-hour journey to our destination, which team Ford had mapped out to showcase the off-road capabilities of the FX4, we were welcomed to beautiful bungalows overlooking the breathtaking Wild Coast.

Slotting comfortably between the Thunder and the XL Sport, which targets the upper and lower market segments, respectively, the FX4 attends to the mid-range target market segment. With no mechanical advantages over its siblings, the FX4 primarily focuses on aesthetics. That said, this pickup strikes a good balance between off-roading and comfort, making the Ford Ranger FX4 a recommended purchase for anyone interested in a lifestyle-oriented vehicle that not only looks the part, but can back it up with capability.