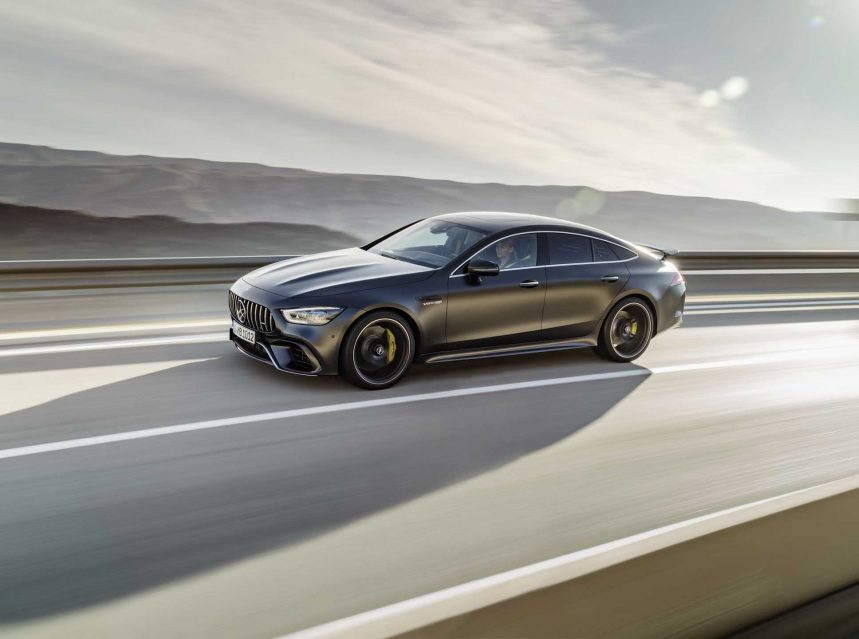 THE QUINTESSENCE OF GT

What makes a Grand Tourer? Is it the luxury, the performance or the distance-bruising ability of a car with this designation?

It’s an abbreviation that has almost become a mainstay label for anything performance… or so it seems. In fact, the criterion for GT was supposed to be simple: front-engine, rear-wheel-drive, two doors and more power than sense. Furthermore, and this was key, GTs were supposed to prioritise comfort and handling over sprint times.

Take the Bentley Continental GT Coupe, a specimen that is widely regarded as the quintessential Grand Tourer. It has most of the above-mentioned characteristics and then some substantial luxury to boot. Add to that the W12 engine that produces 467 kW and 900 Nm of torque translating into an effortless power delivery and it is the perfect weapon for chasing the horizon with the added tractability of all-wheel drive. This kettle of car was changing. 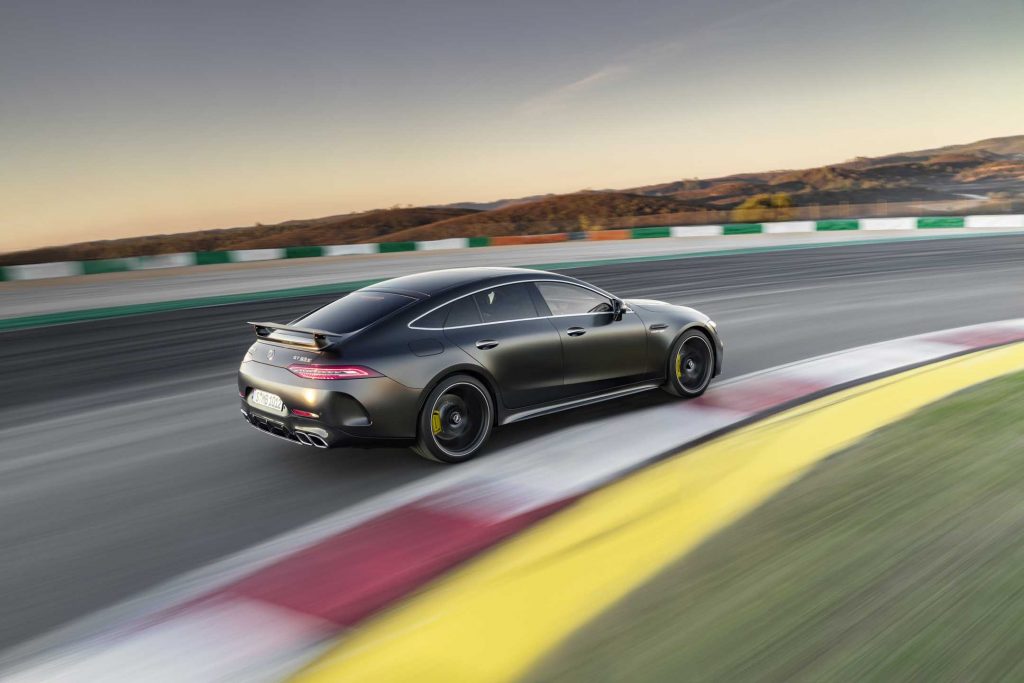 That was the envelope, though, and the envelope was always meant to be pushed. Some called it progress. Some, a dilution of purism but one thing was certain, there was a new breed of GT – a breed that was born with four doors and added even more comfort and ‘practicality’ to the deal.

It was the Genesis of cars that were not only fast and sleek but also prioritised front- and rear-passenger comfort in a near-equal measure, elements that were never before phrased together. The Porsche Panamera and Aston Martin Rapide first traversed these murky areas with the German sending drive to all four wheels, while the Briton somewhat stubbornly clung to the GT diktat as far as drive was concerned with its rear-wheel positioning. The Panamera, while polarising in its design and execution, was described as a GT-revolution and even featured segment-firsts such as a dual-clutch gearbox.

The Mercedes-AMG GT63S 4-door Coupe we had on test, though, is nothing revolutionary. Not to take anything away from it, but like the Panamera and Rapide, it has four doors. It also has the 4Matic all-wheel drive.

Instead of reinventing the GT altogether, the Affalterbach-based performance firm has taken everything that makes the two-door GT tick and fused it into the DNA of the four-door variant. It’s essentially like genetic manipulation; creating the perfect specimen that combines all the right frills, handling traits and performance. 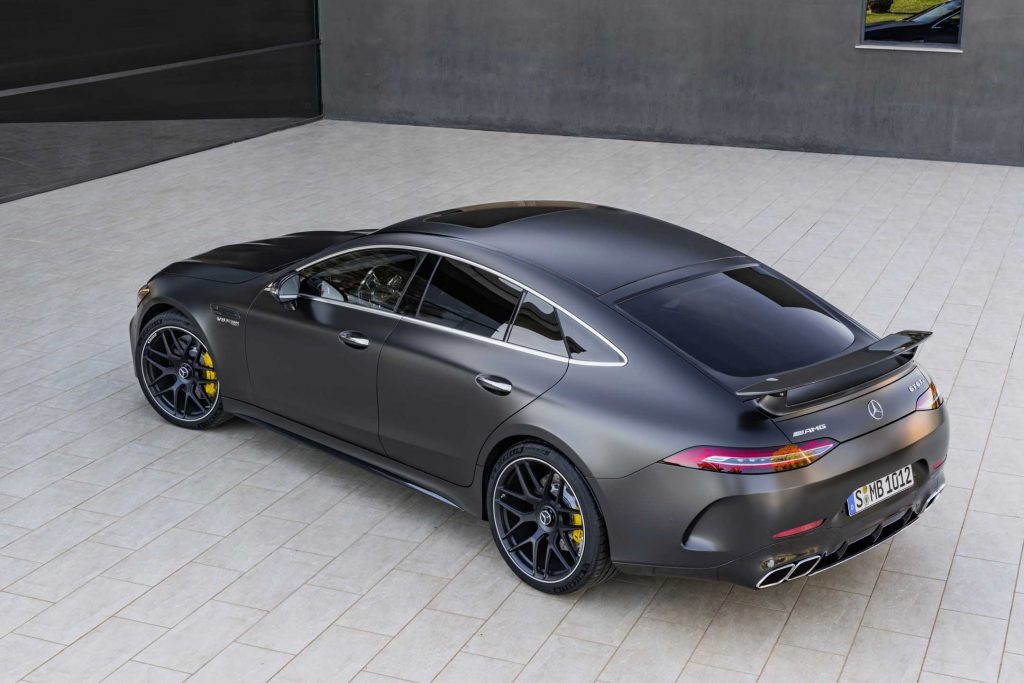 It wasn’t, however, just the performance and luxury rudiments that were carried over, but some visual make-up as well. The grille, for one, was transferred while the rest of the frontal façade, that still happens to bear a resemblance, turned the dials of both aggression and sophistication up a notch.

The rear-view, meanwhile, is drastically different from that of the GT 2-door with the only elements sharing any likeness being the central rear diffuser and the air outlets that dispenses with the intense brake-heat. 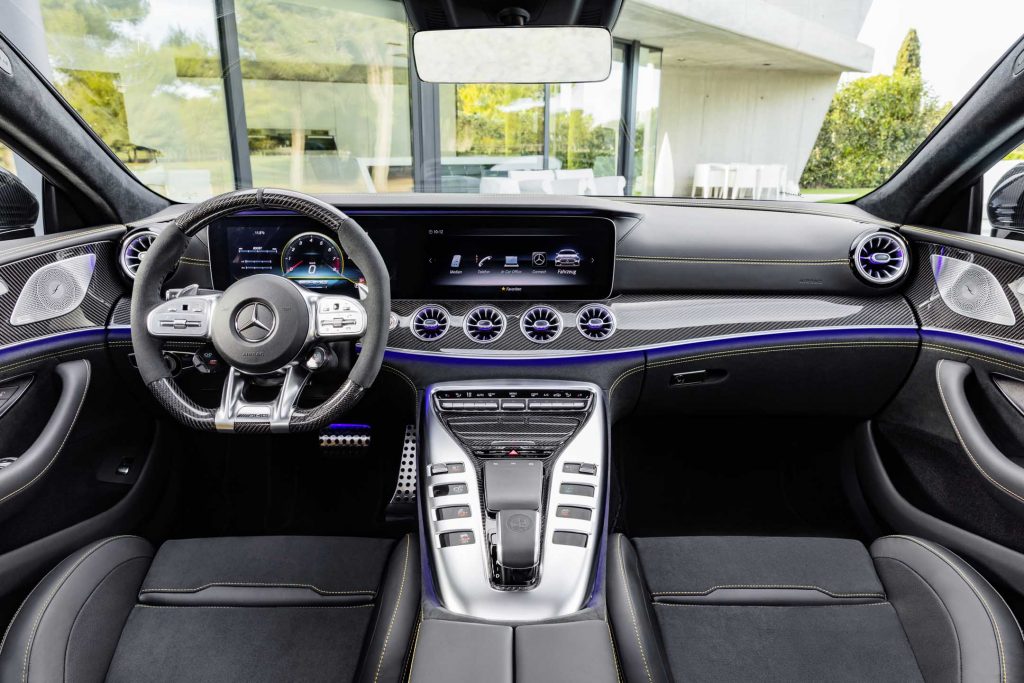 On the inside, too, are familiar bits and bobs like the centre tunnel. It looks good and sporty and all the parts of speech you’d associate with the interior of an exotic car, but it inherited some of the issues as well.

Stowage for one: the centre bin is too deep to put all one’s everyday codicils like cell phones and wallets, and while your instinct would be to slide open the little cubby that looks to conveniently house a nifty cupholder, you’d be disappointed to find just another deep hole that’s not much good for anything besides misplacing items.

And this is not where I brush it off as a nit-pick – it is genuinely quite inconvenient. This is especially true when you consider that this is, in fact, a Grand Tourer and covering great distances, as one should in a GT, you’re inevitably going to get thirsty. And with no functional cupholders present…

That, however, is about the sum of my real concerns with the Merc.

While the luxury-meets-sporty bucket seats, yellow seatbelts, four doors and sleek roofline are sure selling points of the 4-door GT, it’s the performance that’s the real talking-point when someone armed with a smartphone camera enquires about the GT’s credentials.

See, like a true GT, this car doesn’t really advertise its mechanical aptitude with its tasteful styling and slightly understated appearance. In truth, though, it is the most powerful production car -this side of the F1-inspired Mercedes-AMG One – wearing both a Mercedes and AMG badge. The twin-turbo V8 that lives under the sizable bonnet is good for 470 kW and 900 Nm of torque and in layman’s terms that translates into a zero to 100 km/h sprint time of 3.2 seconds.

Press on the accelerator and there’s just a brief delay as the turbos spool up to optimum boost pressure. I suggest using this instant to brace and grip that flat-bottomed steering wheel because, like any characteristic AMG, it is first and foremost a relentless speed machine when poking it with a stick: the sounds, the G-Forces at work and naturally a tunnel-vision effect that intensifies as the digital numbers blur into an upward trajectory.

However, on the other side of its personality spectrum lives the Grand Tourer. With the same minuscule amount of effort it takes for the GT63 to accelerate, it can also settle down and cruise the proverbial boulevard. Take it into town, or just about anywhere else, and it behaves while even offering a reasonably comfortable ride. It’s just so well balanced, it defies belief when you consider what this machine can do on a whim.

It’s far from the description as the perfect car. There’s the stowage issue I mentioned, and I also had one or two operational glitches on the infotainment system. In all honesty, though, I’m yet to master Merc’s software so it might just be a result of my own ignorance. But, then again, I couldn’t ask for assistance from the trusty “Hey Mercedes” personal assistant since it wasn’t installed. Nor was there navigation and on a car costing well north of R3m, it’s quite… odd.

That’s not what GT cars are about, though. Who cares what tech lives in the dashboard? Who cares that this Merc doesn’t have the traditional rear-wheel-drive – although you can decouple the front axle to send power to only the rear. All-wheel drive does have more benefits but even that is irrelevant. To be honest, I couldn’t even really care that the GT 4-door has so many doors – it’s just a means of justifying a buy that will ultimately give you that windows-down V8-burble music-in-your-ears kind of driving experience.

It’s the quintessence of GTs, I reckon, and this Merc has plenty of that!