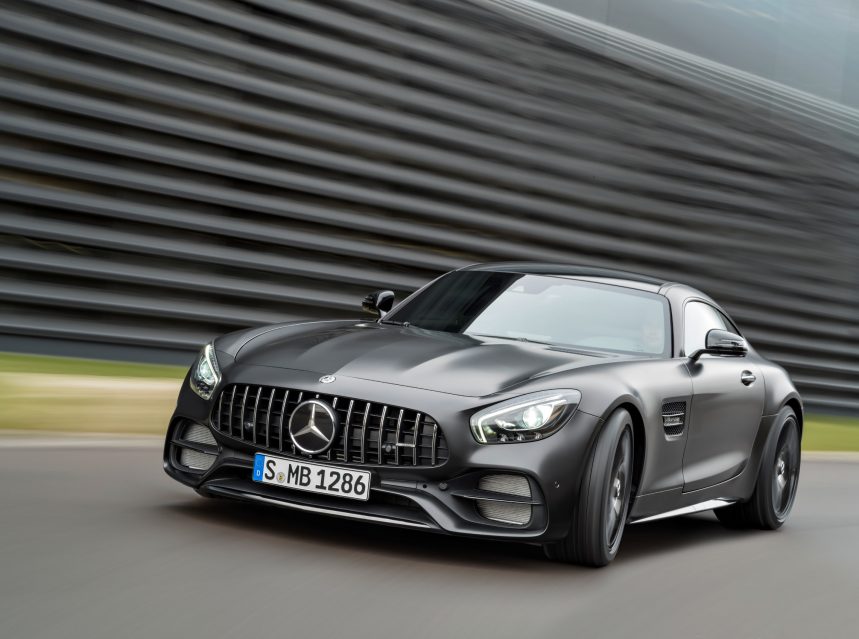 At the top of its 911 range, Porsche offers two extremes: the ludicrous GT3, and the slightly more discreet Turbo. Both of these cars are extremely fast, but are as different from one another as night is to day. Why am I telling you this in a story about a Mercedes-AMG? Well, Mercedes-AMG GT C dynamics engineer Markus Hofbauer used to work for Porsche, and is now plying his trade in service of Stuttgart’s other great sporting motorcar nameplate.

Now that Hofbauer is at Mercedes-AMG, his preference for discreet power – such as the Turbo 911 offers – are beginning to show in the development of the latest GT model: the GT C.

The Mercedes-AMG GT C coupé and roadster joined the GT model line-up in 2017, slotting above the “base” GT and GT S, but below the ridiculously brutal GT R.

Similarly to how Porsche does things, the entire Mercedes-AMG GT family is built around the same 4.0-litre twin-turbo V8 engine and gearbox, with tweaks in levels of power differentiating the lot.

AN AMG ON TEST

Driven had the opportunity to sample a gunmetal matte Edition 50 version of the GT C, to sample some of Herr Hofbauer’s masterful skills.

Looking at the exterior, the GT C sports a long bonnet by modern standards, one that reminds you of SL cars from the 1950s. The same goes for the massive grille with its vertical bars and giant three-pointed star centred in the opening. Emphasising the GT C’s muscular nature is a sleek greenhouse set far back towards the tail end of the body.

For such a large car (although it is smaller than the SLS that it replaced), the GT C coupé is a surprisingly tight fit. Despite its curious lack of space, the senses are immediately consumed by the surroundings. More akin to a fighter jet interior – both in the number of buttons and how the cockpit encircles you – the Edition 50 GT C gets extra carbon fibre accents on the inside, that are not available in the “standard” GT C.

The centre console is dominated by the COMAND controller and several roundels for all manner of functions including the start button, driving mode selector, suspension and exhaust adjustments, and more. Besides adding to that fighter pilot feeling, the layout also looks great while making most essential functions readily available to the driver. The gear selector lever, however, is set too far back, making quick selections on this stalk rather tricky.
Alcantara leather, brushed aluminium, and piano black surfaces round off the premium interior.

In a car of this ilk, however, interior appointments should perhaps be seen as a means to an end. You’re here for one thing, the might, and the music of the car’s thunderous V8.

The C sits near the top of the GT range, and has no shortage of noise or speed, serving up delicious growls, and noisy exhaust pops when driven in Sport or Sport+ mode.

HOW TO DRIVE A Mercedes-AMG GT C

Merc-AMG GTs are automotive pleasure devices that should be driven in a way that unlocks your most basic instincts. In other words, you should drive it like it’s an American muscle car: because you sit so far back, almost on top of the rear wheels. Because of this, the trick is to aim the long front end into corners, wait, and then hit the accelerator as the road begins to straighten. In that sense, it is more of a GT car than a purebred sports car, more DB11 than 911.

With Herr Hofbauer on-board at Mercedes-AMG, the GT Cs dynamic evolution has been observable, over the first generation of GTs, at least. Where the original GT felt nervous, almost twitchy, the GT C is a whole heap more settled, and reassuring through corners, especially tight ones.

Steering is still light, and still hydraulically power-assisted (one of the few remaining in this segment), helping the GT C bend into corners securely and accurately. Standard rear-wheel steering provides even greater agility, helping the GT C cut harder through corners at lower speeds while keeping steering effort to a minimum. Above 100 km/h, the rear wheels steer in the same direction as the front wheels, enhancing stability in either a straight line or a fast bend.

The AMG GT has, in a short time, evolved into a very charismatic car, one that has been refined and updated to make it even more desirable and capable. The GT C, specifically, while not a direct 911 rival, it has its own character that’s flashy yet open-minded about it. Seemingly Herr Hofbauer’s influence is working.