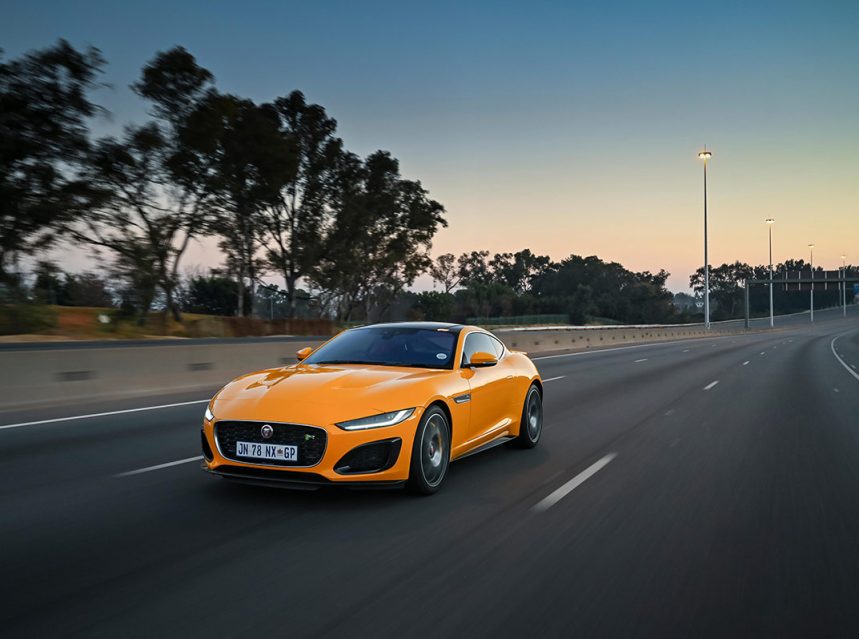 Driven was one of only two publications invited to sample the upgraded Jaguar F-Type in Portugal in 2020, just before the world went mad. Representing both the past and the future of Jaguar sports car design, the F-Type is fast (very fast) becoming a local classic for enthusiasts here too.

Seven years into the lifecycle of Jaguar’s F-Type sports car, the enigmatic two-seater received a much-needed overhaul. While we sampled the range of supine felines on the highways and switchbacks of central Portugal in early 2020, the car comes into its own on local soil, as much as it does everywhere else in the world, where it has been received with acclaim.

Representing something of a time machine for the Jaguar brand – having a claw in both the brand’s past and present – the F-Type harks back to when what we now regard as iconic design was still quite avant-garde. Equally, the F-Type upgrade shows the way for future Jaguar sports cars in terms of design and technical prowess.

By the late-1950s, Jaguar closed the book on its early racing heritage after successfully competing in a string of 24 Hours of Le Mans races with the company’s D-Type racing chassis. With the fruits of their development programme still in hand, the then-defunct Jaguar department was given the brief to use D-Type style construction to build a road-going sports car to replace the XK150.

The original prototype (E1A) was introduced in 1957 and featured a monocoque design, Jaguar’s fully independent rear suspension and the well-proven “XK” engine. The car was used solely for factory testing and was eventually scrapped. Jaguar’s second E-Type concept (E2A) – constructed from a steel chassis with an aluminium body – ultimately became the foundation for the Series I production car to be introduced between March and July 1961.

Following in the footsteps of its elegant progenitor, the 2013 Jaguar F-Type, the refreshed F-Type is as progressive in its design now, considering the constraints of current safety regulations, as the E-Type was in the 1960s.

The signature Jaguar double haunch lines that have defined that brand’s sports cars as far back as the Jaguar XK120 from the late 1940s are now more defined, and the new slimmed-down design of the horizontal full-LED headlights that have replaced the vertical units of the original F-Type is the stylistic highlight of the new car for me.

Enhanced by a more prominent grille, new front bumper design, and a restyled clamshell bonnet, the car appears much more masculine front-on. At the same time, the bonnet also seems to be significantly longer when viewed from the side – a more deliberate echoing of the E-Type’s fantastic nose.

Daytime running lights have retained the signature J shape that defines modern Jaguars, as the rear lights, now designed with an LED chicane signature that reminds one of the I-Pace electric SUV, précis the enhancements at the back of the F-Type.

A mix of subtle enhancements and new-generation technology define the changes to the refreshed F-Type cabin.

A new digital instrument panel replaces the analogue instruments of yesteryear with a 12.3″ high-definition virtual instrument cluster with personalisation options galore. Multiple display themes allow the driver to set the mood from a classic analogue style to a full navigation map, and – to emphasise the car’s sporting nature – a large central rev counter and speedometer are the default setting.

Compatible with either Apple CarPlay or Android Auto, the updated infotainment system retains the current touchscreen size, although the now higher-resolution screen is significantly crisper than before. Of interest to music junkies, the new Jaguar infotainment system has Spotify embedded into the system and can do software updates over the air.

With all its sumptuous Windsor leather goodness and satin-finish chrome, the F-Type retains its uber-classy cabin feel. Monogram stitching, Jaguar motifs in the headrests and doorsills, and discreet Jaguar crest markings offer further, subtle reminders of the heritage of this car.

While altogether six versions of the F-Type are offered here, with two engine options, **Driven** tested the uber slick 5.0-litre supercharged V8 – a machine to be reckoned with. 423 kW and 700 Nm of torque under the hood of almost any appropriate car is bound to have spectacular results, but in the all-wheel-drive F-Type R, it translates to a zero to 100-km/h sprint in a claimed 3.7 seconds and a rated top speed of 300 km/h. But there is so much more to this beast than its performance numbers suggest.

The mighty 5.0-litre R version is the pick of the F-Type bunch for those who expect all-out madness to ensue when they stomp on the loud pedal. Yet, its power is in the prowess with which it tackles the twistiest of roads and the emotions experienced (and endorphins released) with every minute spent behind the wheel.

Although there is nothing tame about this bad boy, Jaguar has achieved what is likely their greatest upgrade feat with the F-Type’s new active rear differential. Combined with next-generation all-wheel grip, fast-thinking stability control, and purpose-designed Pirelli P Zero tyres, this cat can almost not put a foot wrong.

As I discovered on the twisting backroads of the Cradle of Humankind during our test drive, wielding 700 Nm on tight, winding blacktop can get a little interesting if the car’s dynamic components don’t play well together. The previous F-Type was often criticised for being too light in terms of steering feedback. Although I would personally not make that charge under everyday driving circumstances, there has been a complete recalibration of the electronically-assisted power steering, giving a more taut, responsive driving experience. The R is made to be manhandled, and the new steering set-up does feel beautifully weighted.

New springs and anti-roll bars front and rear, and an uprated chassis, present a more solid sporty experience. At the same time, the eight-speed ZF transmission has also benefitted from Jaguar’s fearsome XE SV Project 8 – the most powerful road-legal Jaguar in history. You can feel its DNA here, coursing through the veins of the new F-Type, albeit in a more refined way.

Taking a drive in the V8 F-Type confirmed for me, yet again, why Jaguar’s history of creating thrilling driving machines is so well respected. True, it is a considerably extensive evolution rather than a brand-new car, and there also may be sharper handling options out there, but the AWD F-Type is every bit as emotional and forward-thinking as the original E-Type ever promised to be.