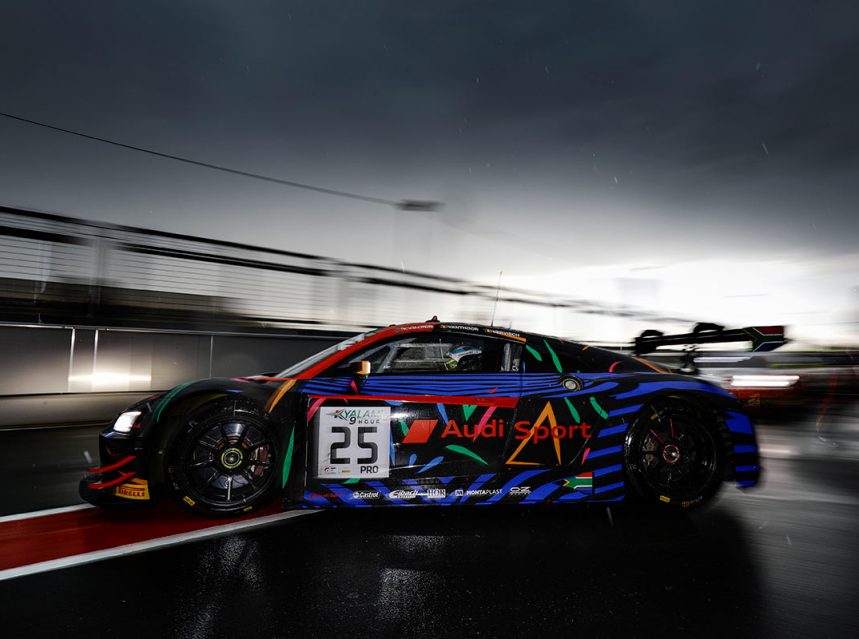 For nearly four decades, South African racing fans longed for the return of the iconic Nine Hour race. In November last year, it finally happened. Egmont Sippel drank in the sights and sounds.

For 24 years I’ve been living next door to Alice. That’s a long time, not so? Now add half of 24, or another dozen, and then, just for the hell of it, another year and you get to 37. That’s how long it took Kyalami to get the Nine Hour race back on its calendar.

The fact that Porsche guru, Toby Venter, bought Kyalami half a decade ago and upgraded it no end, and the fact that Stéphane Ratel’s racing organisation (SRO) wanted to extend its Intercontinental GT Challenge series to more than Bathurst (in Australia), California (USA), Spa-Francorchamps (Belgium) and Suzuka (Japan) undoubtedly played a major part in Kyalami’s return to form.

Yet, the fundamental ingredient remained South Africans’ love of fast cars and, when it comes to racing, the iconic Nine Hour event.

A big moment it was, then, when the first of a host of guns-a-blazin’ petrol fed GT3-monsters cranked up their engines on Thursday, 21 November 2019, and again on Friday for the first practice sessions, for pre-qualifying and for qualifying itself, followed by the Top Ten shootout to determine the grid.

And it was then, with 15 minutes to go in the shootout, that the rain came and Nick Tandy slid off the track in Clubhouse.

Nope. For there he was again, the Brit, when the flag fell at session’s end, to grab pole. And a meaningful pole, at that, as Tandy’s teammate, Dennis Olsen, still had an outside chance to sneak past GruppeM Racing Team’s Maxi Buhk to clinch the driver’s title, whilst Porsche still had a chance to overhaul the Mercedes-AMG GT3 gang for manufacturer’s honours.

It was a long shot on both fronts, but seeing that Porsche led Audi and Merc on the grid and that heavy rain was expected on Saturday, anything could still happen.

And it did. On Lap One of the race, Buhk’s bright yellow Merc-AMG – with serpentine scales painted around the nose and tail – ground to a halt with mechanical issues.

Round One to Porsche then, as Dennis Olsen shot away from pole to pull a comfortable gap which would be protected by the Dane and his two fellow drivers (Tandy and Mathieu Jaminet) for the rest of the race.

And throughout the cacophony of sounds – the Mercs and Bentleys from a dark and noisy netherworld, the Porsches and Audis from the set of **Texas Chainsaw Massacre 2**, the BMW M6 GT3’s with a turbo hiss and pop like machine-gun fire, the Bentley Continental GT3’s and Nissan GT-R Nismo GT3’s with a backfire like dynamite sticks exploding and the Aston Martin Vantage AMR GT3’s like war machines on dope – throughout this cacophony, amplified by Ferrari and Lamborghini shrieks as well, the race remained ever so tight at the front.

So, with the main Merc out, and with Olsen and Porsche in with a shot, would the rain deny them?

Nope again. When it finally came with two and a half hours to go, a Bentley promptly crashed, bringing out the safety car. Holding station in the lead was Olsen’s Porsche, driven by Tandy again.

And when the safety car pulled into the pits with less than half an hour remaining, the Brit instantly pulled a sizeable gap, after which he stroked the Frikadelli Porsche home to assure Olsen and Porsche of the respective titles.

The first Nine Hour race in four decades thus came and went and it was a joy to be part of it all again. Gone are the overnight campers, the trackside braais and the hippie girls with flowers in their hair.

But back is the bang and the cars and the smells and the colours. The Nine Hour is alive and well and living at Kyalami.