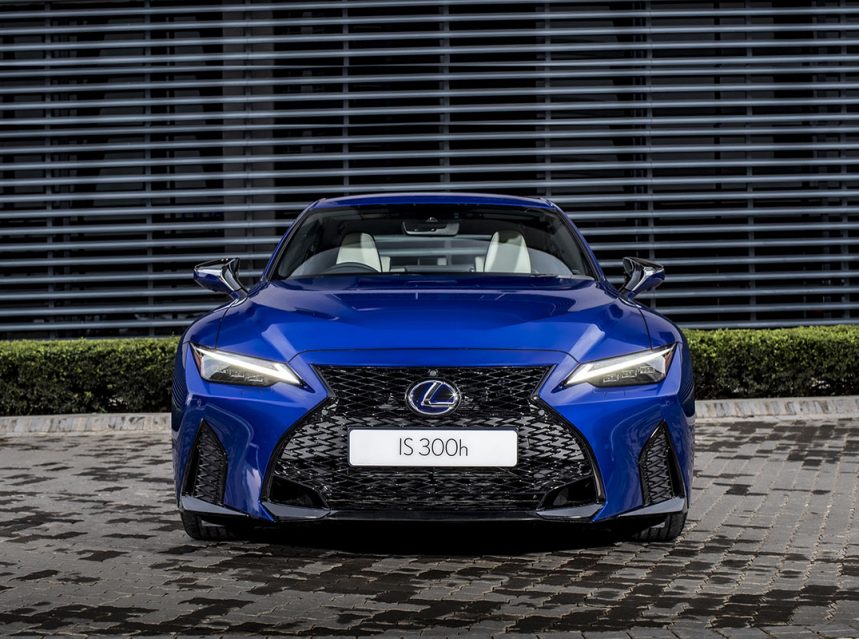 It has been 18 years since the first Lexus IS Sports Sedan graced local streets. Now, the re-imagined 2021 IS delivers a new level of luxury, evocative design, innovative technology and leading driving dynamics.

In 2003, Lexus was all but an unknown entity in South Africa. Despite the Toyota brand’s dominance in almost all other local segments, introducing a luxury-focused Japanese brand was an extended gameplay. For Lexus to ascend to the same lofty heights of market success as the brand had in the United States, it had to differentiate itself from the entrenched pack of German executive sedan offerings from Audi, BMW, and Mercedes-Benz.

If a sports sedan could assume a fairy-tale character’s identity, the Lexus IS would undoubtedly be the genre’s Cinderella. ‘Growing up’ in an environment where her siblings always had the upper hand, our fledgeling beauty had to ensure that she stood out from the crowd – a feat easily achieved as the new IS range makes its debut.

For the very first time, Lexus has decided to launch IS as a hybrid-only range. The hybrid market has shown immense growth globally in the past five years, and the shift from diesel to alternative-propulsion vehicles is expected to keep growing at a rapid rate.

With this in mind, Lexus South Africa plans to leverage its existing dominance in the hybrid-electric market while positioning its hybrids as performance and technology-rich vehicles.

Features that become standard on the Lexus IS for the first time include 18” alloy wheels for the EX and SE (19” for the F Sport), an electric park brake (replacing the foot-operated brake), a new 10.3” touchscreen with Apple CarPlay and Android Auto, a pre-collision system for the SE grade and F Sport (with an astounding daytime/night-time pedestrian detection system and daytime cyclist detection), all-speed active cruise control (SE and F Sport), lane tracing assist (SE and F Sport), blind-spot monitor (SE and F Sport), rear cross-traffic alert+brake, as well as a panoramic view monitor for the SE and F Sport when reversing.

On the F Sport and SE grades, the pre-collision Lexus Safety System+ will warn you of a detected hazard from approximately 10 to 180 km/h. Pre-collision brake assist functions from around 30 to 80 km/h with pedestrian and daytime cyclist detection, and between 30 and 180 km/h with a detected preceding or stationary vehicle.

What’s more, at an intersection, the pre-collision system is designed to provide a warning alert, then braking, if you accidentally turn in front of a detected oncoming car driving in the opposite lane, or a pedestrian walking in the opposite direction. It is also the first Lexus to offer emergency steering assist (ESA) that will automatically apply additional steering torque to assist the driver in manoeuvring within your lane around an unforeseen obstacle.

Although not new to the line-up, several standard luxury features include smart entry and start, heated- and power-adjustable front seats, dual-zone climate control, a 10-speaker audio system for the EX grade, and spectacular 17-speaker Mark Levinson sound for the SE and F Sport grades. The top-spec models come standard with satellite navigation, voice control and LED headlamps with automatic high-beam. IS 300h SE buyers also have the luxury of a moon roof, which comes standard with the model.

As all models are fitted with the same hybrid propulsion combination, all grades achieve a total system output of 164 kW. The IS has a combined-cycle fuel consumption from as low as 5.2 l/100 km, while on the performance front, the zero to 100 km/h sprint is dispatched in 8.7 seconds, culminating in a top speed of 200 km/h. The IS boasts a petrol-hybrid 2.5 litre CVT engine that achieves its maximum power of 133 kW at 6,000 r/min and maximum torque of 221 Nm between 4,200 and 5,400 r/min.

Lexus positions the new IS as a focused driver’s car. The IS F Sport and SE grades offer more advanced specifications, with the F Sport offering dynamic hybrid vehicle performance.

THE BELLE OF THE BALL

The IS F Sport is alluring and assertive in its design, the coupé-like silhouette distinguishing the car from all other sports sedans. The signature spindle grille itself is a true work of art that shows inspiring intricacy in its iconic mesh pattern, complementing the brand’s sporty image. The lower grille boasts air intakes inspired by the sporty RC-F, which stamps further authority on the car’s sporty looks.

F Sport exclusive decorative items include the F Sport emblem on the front fender and piano-black trimmings on the front grille and lower bumper.

The new IS becomes the first Lexus to debut the “Lexus Driving Signature” that will become the development standard for all future Lexus models. This ‘signature’ is defined by linear vehicle movement that remains faithful to a driver’s intentions, providing a seamless transition from braking to steering and acceleration through a corner. Lexus developed these dynamic values at its technical centre in Shimoyama, Japan, which opened in 2019.

The test course is based on the gruelling Nürburgring Nordschleife, famous for its challenging driving conditions. By repeatedly subjecting both vehicle and engineers to daily tests in this severe driving environment, Lexus was able to devise an ever-higher dimension of vehicle performance, leading to a variety of enhancements to the new IS chassis, body rigidity, suspension set-up and development, and Lexus Adaptive Variable Suspension system, to name a few. The latter boasting anti-dive and anti-squat control, as well as roll-attitude control and unsprung mass vibration damping control that helps to enhance road holding without the loss of ride comfort.

Active Cornering Assist (ACA) is also new on all models. It is designed to maintain the ideal vehicle posture when cornering by imperceptibly braking individual wheels to keep your intended driving line.

The 2021 Lexus IS is offered in no fewer than ten exterior colours, with three of those colours – Solar Storm Red, Poseidon Blue, and White Nova –exclusive to the F Sport. The EX and SE have an additional two exclusive colours – White Quartz and Morello Red.

Striking colours for a strikingly handsome vehicle that refuses to conform to the traditional notions of what an executive sports sedan should be. That same determination to maintain its segment-leading status for hybrid sedans is evident in the fact that the entire IS range also boasts a best-in-class seven-year/105,000 km warranty and full maintenance plan.

There has never been as compelling an argument for you to invite Cinderella to the ball, where her glass slipper is guaranteed to be a perfect fit.