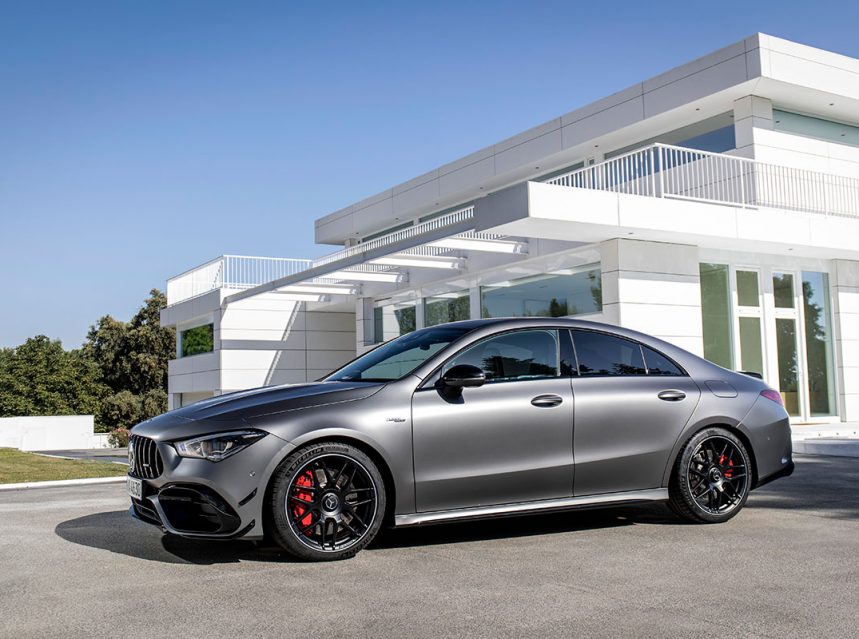 When Mercedes rolled out the A45 AMG, it caused quite a stir among the purists. A non-V8 AMG sounded like sacrilege. “AMG has lost its way”, they chanted, brandishing burning torches and pitchforks. Yet despite all that online chatter, the A45 managed to charm its way into the hearts of many with its highly potent little engine. Eventually Mercedes would filter that engine into the CLA, creating the CLA 45 S AMG as a more stylish alternative to the hot hatch. I recently got the keys to the car myself, and as an AMG purist, I wasn’t quite sure what to expect.

When I first laid my eyes on my tester, I was immediately taken aback by just how much road presence this car has. Photos simply do not do it justice. The styling is sharp and aggressive and yet has a level of sophisticated charm about it. Kudos to whoever spec’d my tester with bright red paint together with silver 19” AMG style alloys. It complemented the design beautifully. Up front, the AMG exclusive Panamericana grill dominates and gives the car an aggressive face. Gorgeous headlights complete the look with running DRLs. The side profile is obviously all about that sloping roofline that earns the car its ‘coupé’ moniker. The rear of the car is an aggressive affair, completed by beautiful rear LED tail lights, a sporty diffuser and quad exhaust pipes, as well as a ducktail boot spoiler. Mercedes really stuck the landing with this design. And sue me if you will, but does this car not scream baby AMG GT 63 coupé?

How Does the Interior Fare?

Brilliantly. My first impressions were that the interior is a tech fest. All attention is drawn to two highly customisable 10.25” screens which dominate the dashboard. While they may seem daunting at first, you will soon find that the new MBUX system is highly intuitive. The screens are controlled by two touch sensitive buttons on the steering wheel that remind me of Blackberry phones of old. The steering wheel itself is a sensory delight as the Dinamica microfiber material it is wrapped in is pleasing to both touch and sight. Also connected to the either side of the steering wheel are two control knobs giving the driver quick access toggles for the exhaust mode, stability control system and the various driving modes.

The rest of the cabin is made out of great materials though the piano black trim in my tester was a fingerprint magnet. While the seats are comfortable for all passengers, rear sitting is a bit tight and headroom might challenge taller passengers due to the raked roofline. The boot space is, however, pretty practical at a claimed 460 l.

Not quite. AMG is synonymous with burly V8s and loud growly exhaust notes, which this car clearly lacks. But stay with me. The CLA 45 S shares its power plant with the A45 hot hatch. This is by no means bad news as that 2.0-litre turbocharged four-cylinder engine remains the most powerful series production four-cylinder engine ever made. How the guys at AMG were able to extrapolate 310 kW (at 6,750 rpm) and 500 Nm (from 5,000–5,250 rpm) from a 2.0-litre engine beggars belief. With turbo lag virtually non-existent, the sedan rockets to 100 km/hr in about four seconds and will keep gathering speed until you bounce off the limiter at 270 km/hr (with the optional AMG Driver’s Package).

An eight-speed DCT automatic transmission swiftly snaps into the right gear when left to its own devices and also allows you to take the reins via steering-mounted paddle shifters. As you bang through the gears you will soon note that the little engine likes to rev and will gladly serve audible delights complete with pops on the overrun. Sure, the sound is enhanced slightly through the speakers and lacks the trademark V8 growl that we expect from AMG products, but believe you me, it grants sensory satisfaction.

With most of my time spent driving around the city, I found the CLA 45 S easy to drive. The small dimensions, plus the light steering at slow speeds make it easy to manoeuvre around tight spaces. Once you select sportier driving modes, the steering wheel weights up to give you assuring command of the car at speed. There is enough feedback from the wheels to know what they are doing, and overall the CLA 45 S has notable composure on the road. Depending on driving conditions and what you are asking from the vehicle, the adaptive dampers automatically ensure that the car is setup to meet your demands. I, however, felt the suspension to be a bit too firm. This problem plagues a lot of performance cars seeing how they almost always have the same issue with riding a tad stiffer than their non-performance variants. Saying this, the CLA 45 S certainly won’t pose a threat to your spine every time you drive over road imperfections.

As with almost all the cars in the AMG line-up, the CLA 45 S also comes with the famous 4Matic + system we first saw on the E63 a few years ago. The system partners up with torque vectoring to ensure that power is distributed among all four wheels to maximise grip. What results is a vehicle that sticks to the tarmac. And when you feel the need to indulge the lunacy within, the car has a Drift Mode that coaxes the car to lose its tail around corners, all the same ensuring that you won’t be filing eye watering insurance claims afterwards. The engineering that the madmen at Affalterbach put into this car is nothing short of incredible, and has resulted in a car that faces absolutely no competition from similar offerings from either Audi or BMW.

I approached this car with a preconceived notion of distrust. However, after a few days I was pleasantly won over by the surprising fun I experienced in this non-V8 AMG. In all honesty, the car lacks that dread-inducing character of AMGs of old. However, that does not take away from how immensely capable it is. Who knows, we might also just equally enjoy the pending “V8-less” C63. The one AMG trait this car does share with its brethren is the damage it does to the wallet. Prepare to part with R1.1 million, give or take – Yikes!