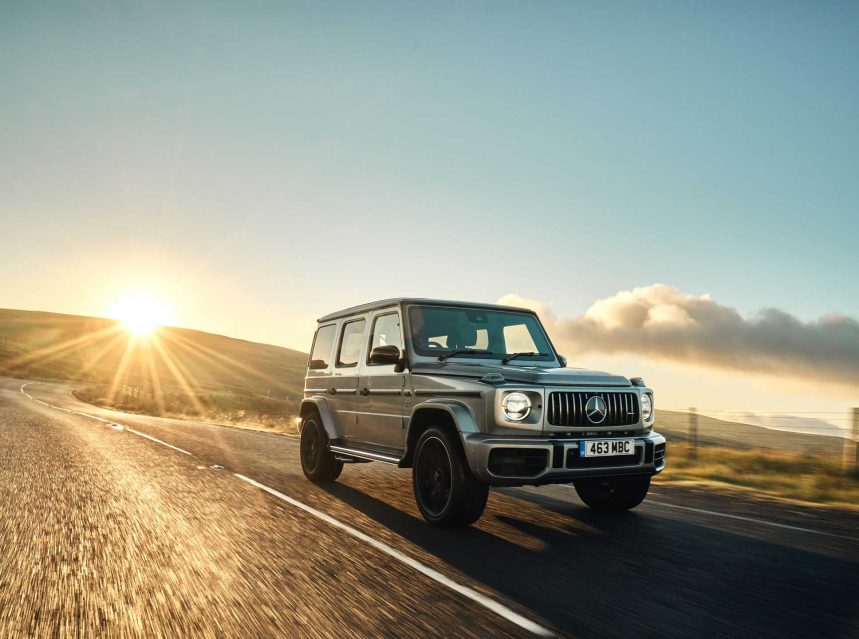 The Gelandewagen has endured the decades. As it should, since Mercedes claims that the G-Class is stronger than the hands of time. And now, just from a performance point of view, it’s even more impressive than the previous iteration while DEON VAN DER WALT is also of the opinion that even with the new Mercedes-AMG G63, time with all its destructive qualities is still pulling on the short end of the stick.

Someone – and don’t ask me who it was – once said that driving a G-Wagen was like driving a luxury apartment building. This statement, as I found with the previous iteration, had no bearing on the G63 when it comes to pointing it in a straight line.

To the contrary; it launches forwards without a moment’s hesitation. It slurps the air through the imposing grille and changes it into what is essentially a raucous symphony of thunder and velocity with enough of a CO2 helping to make an environmental lobbyist cringe. Approach anything that resembles a corner, though, and it’s time to test what the brakes are made of because, it’s here, on the twisty bits, that the G-Class tends to become a bit nervous. 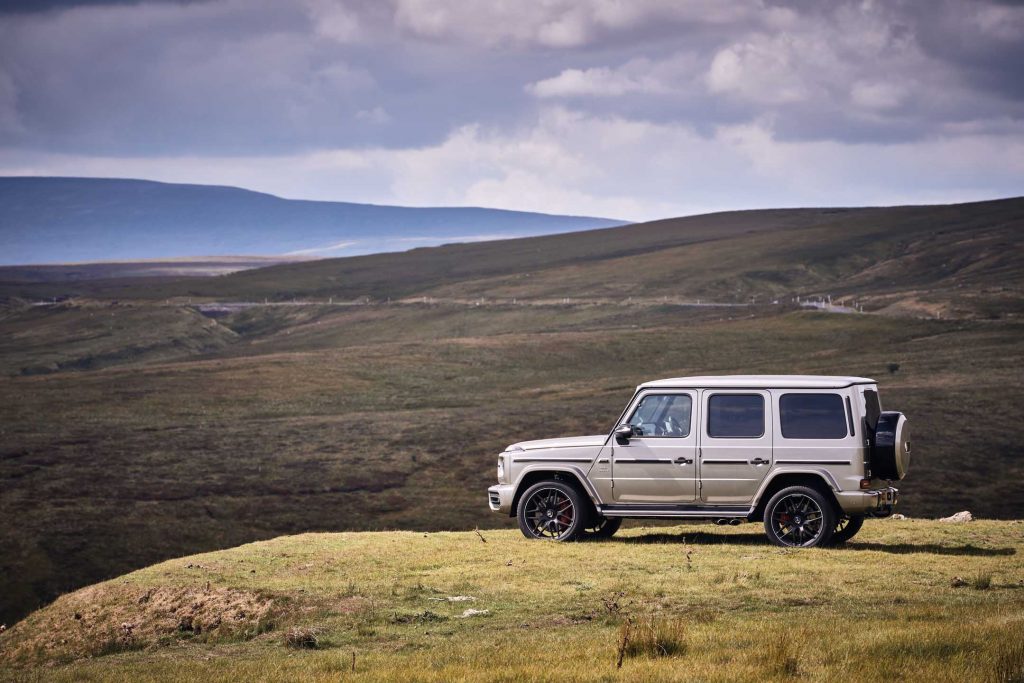 In case you were wondering if the new G still has this same character flaw, it might be worthwhile to point out that it was never meant to go around corners – as the 1,969 mm tall posture might suggest.

Instead, it was originally manufactured as a military vehicle and eventually, in 1979, trickled down to civilian use. While inarguably some individuals of the era might have envisioned its future demagogue-potential, it was first and foremost designed to go off-road.

So far off any road, in fact, that it was fitted with three differentials (front, centre and rear). This box-on-wheels didn’t go around anything because well, that’s just too middle-of-the-dusty-track, it went over.

CAN THE G63 BLING GET DIRTY? 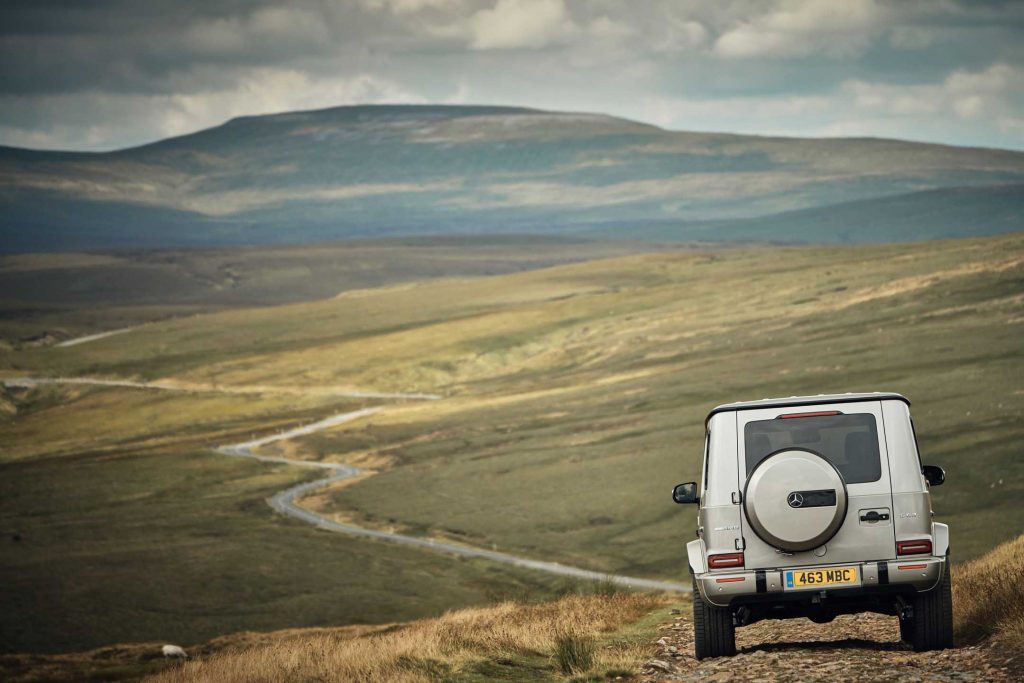 So, you noticed the 22” wheels that’s hugged only by thin sporty strips of rubber? Well, don’t for a second think that the G-Class is in self-denial about its deep-seated off-road abilities. It is, at the core, still as – if not more – capable than its predecessors. Still present is the body that’s strapped to a ladder-frame chassis together with the fabled three differentials that can just about take it anywhere.

In addition, like any true off-roader, the G63 also boasts an off-road reduction gear (4-low) that complements the standard 4Matic all-wheel-drive system, while three off-road modes namely Sand, Trail and Rock are available because, well, the glammed-up G-Class has a bundu-bashing reputation to maintain. 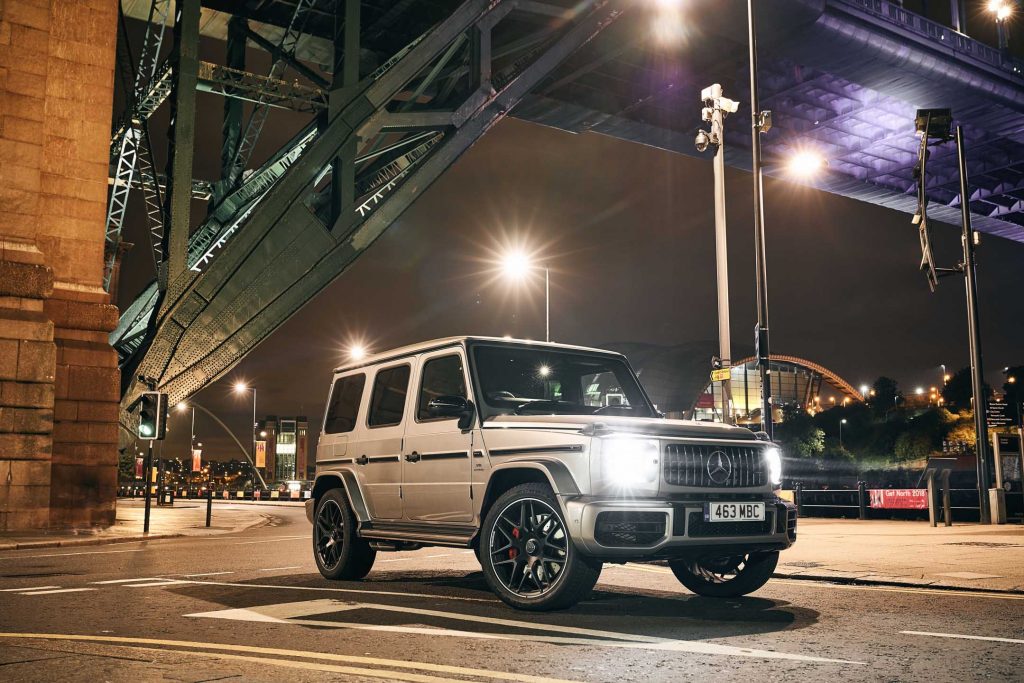 The newest of Merc’s toughest SUVs might at first glance strongly resemble the first G-Class, or at the very least, be an out-and-out copy of its predecessor. The reason for this, says Johannes Fritz, Co-CEO of Mercedes-Benz South Africa, is that the carmaker has only modified that which would strengthen the G-Class predecessor and make its uniqueness even more pronounced.

A downright copy, though, it is not. Sure, the characteristic G features like the upright and boxy outline, exterior door hinges and the wheel arch-mounted indicator lights are still present – but the package as a whole marks an overall improvement.

For instance; the wheel arches now look to be cohesive with the body as opposed to the outgoing model’s, which looked to be plastered on as an afterthought, or even the bonnet that now looks like it actually fits around the contours of the body. Small details, but at nearly R2.5-million? 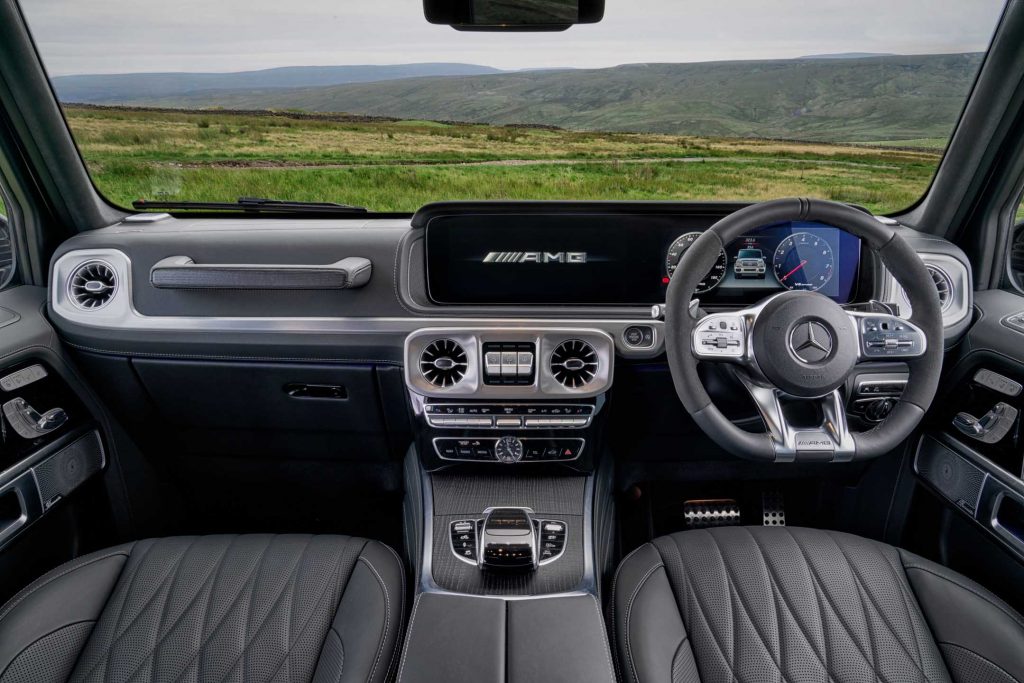 Exterior highlights, besides body components that fit seamlessly, are semi-circular LED Daytime-Running Lights, while at the rear the taillights have received a welcome redesign. The G63 also employs Merc’s Multibeam LED technology that combines with Adaptive High-beam Assist.

On the inside, the changes are truly noteworthy. Aside from the plush seats that actively hug you through corners, the cabin of the Gelandewagen finally lives up to its positioning within the Merc stable. It is, quite simply put, an embodiment of tasteful opulence. Subtle details like the side air-vents that mimic the design of the headlight clusters or the three chrome-coated differential switches all serve as no uncertain reminders that this is probably as good as it gets in SUV terms. 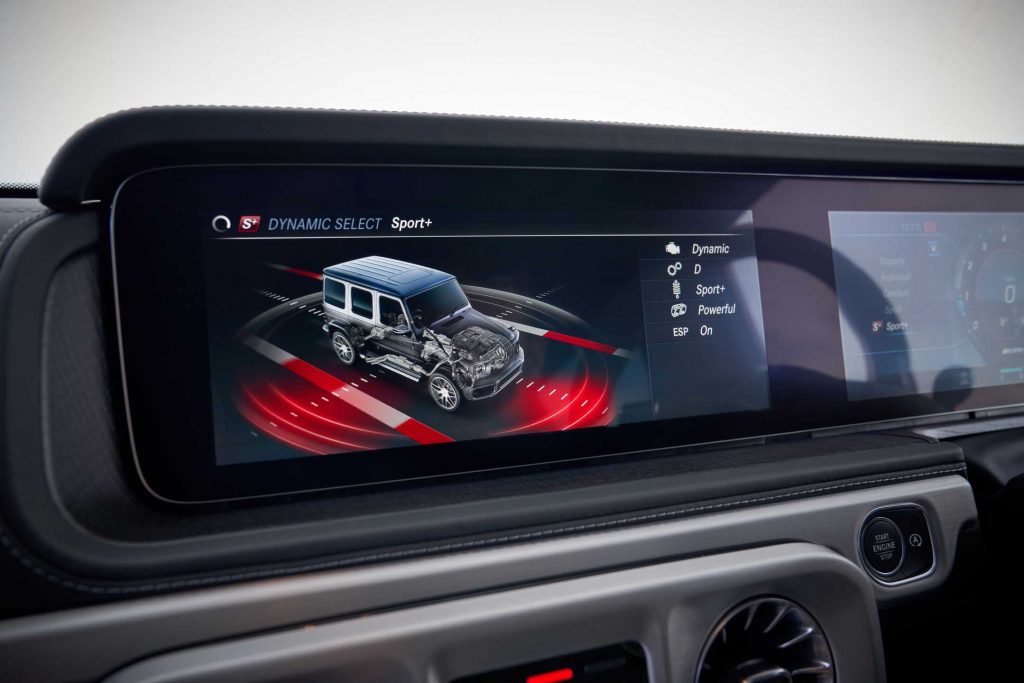 What takes centre-stage, however, is the now hallmark Widescreen Cockpit that purveys all crucial driving and entertainment-related information using two 12.3” display screens. What did bug me somewhat upon further exploration of this system is that it, despite first making an appearance in the A-Class, doesn’t feature the MBUX active assistance software.

For now, the G-Class will only be locally available in the Merc-AMG G63 guise with the mainstay 4.0-litre V8 bi-turbo engine that churns out 430 kW and 850 Nm of torque. That’s a lot, by any means of measure and even in the near two-tonne luxury-lorry it makes its presence felt.

Put your foot down and the front wheels that only receive 40% of the torque load – due to the 40/60 split – skid in an effort to transfer it through the wheels. And then it’s a question of clinging on for dear life as the SUV launches forwards with a thunderous baritone that originates from the four exhaust pipes, two of which are situated on each side under the rear doors.

It has its flaws, most of which in my mind stem from that unflappable and unapologetic body-shape. While Merc has undeniably done everything its resources allows to streamline the block, it still guzzles fuel at a rate that can make a refinery run dry, and then, there’s the wind noise. But, then again, who cares when lurking under the bonnet is that magnum opus of a V8 that makes things better however deeper that right pedal is depressed.

Then there’s the question of its ability to take a corner. Well, while it’s considerably better than the previous iteration, we would – despite many an interweb-snippet of advice on cornering with a G63 – recommend caution. It was after all meant to be tough, not agile.
And just because of that we can’t help but respect the engineering and craftsmanship that went into making it all work so seamlessly and at a starting price R2,591,000 – it better well should be. 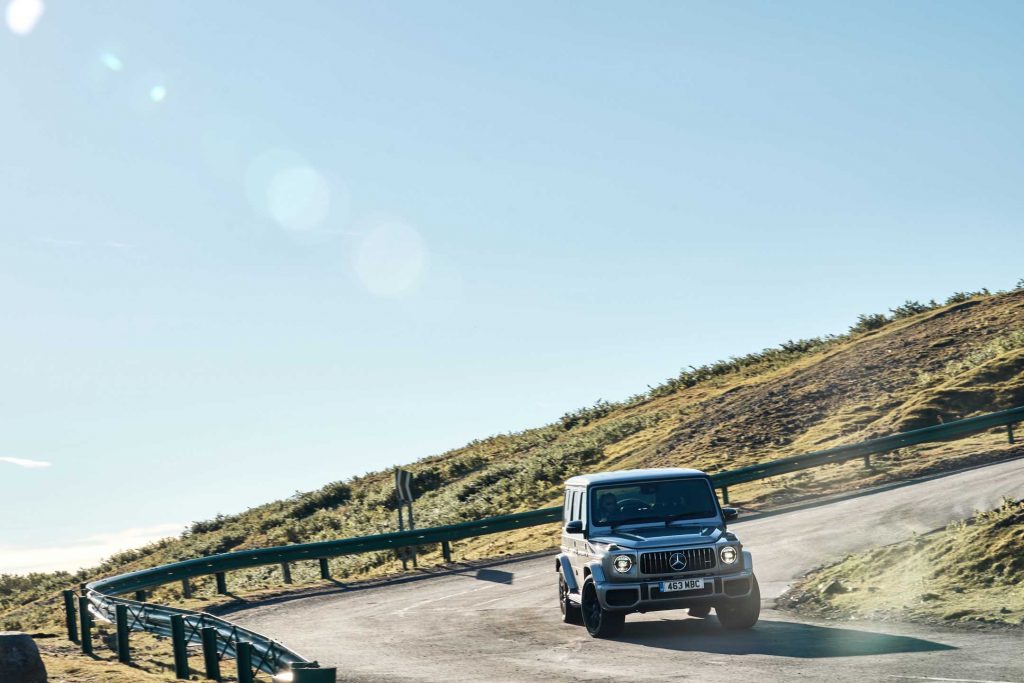