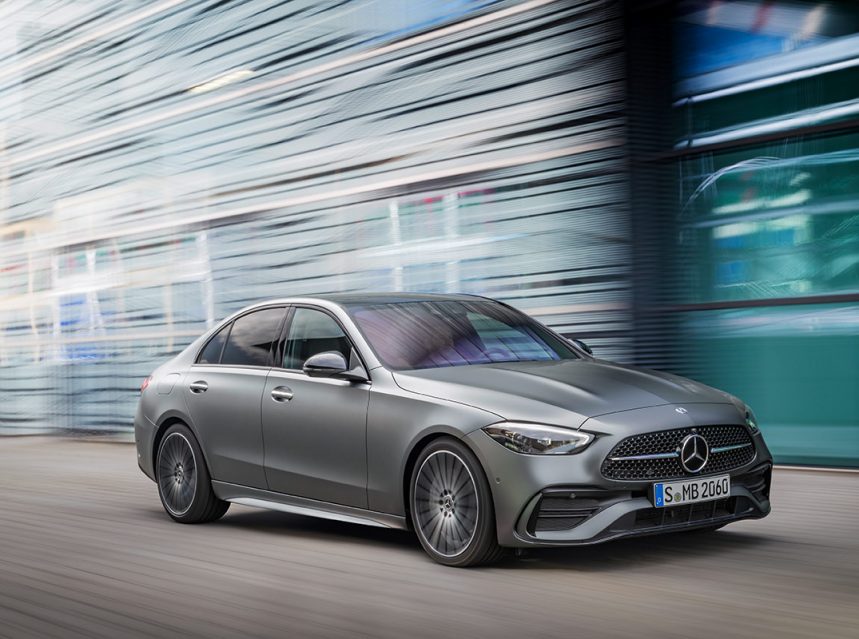 Almost 30 years after introducing the 190E “Baby Benz”, Mercedes-Benz has shown the newest C-Class to the world. Beautifully sculpted and exceptionally forward-thinking, the new C-Class features AI on-board and four-wheel steering, while hybrid models boast up to 100 km in pure electric mode. And, best of all, it will be built right here in Mzansi!

While old enough to remember the introduction of the Mercedes-Benz 190E, **and** the first C-Class in South Africa, I did not attend the official launch of either of these iconic cars. Thankfully, for being too young…

Young or old, the C-Class has enchanted millions of buyers across the globe since the car’s first debut, and it fast became one of the most purchased Mercedes-Benz cars in history.

Initially, the C-Class was positioned as a smaller car that offered the same Mercedes-Benz luxury and reliability that buyers had come to expect from the brand. Today, the C-Class is the testbed for many new technologies that later trickle up the value chain, instead of down, as before. We look at some of the features that will arrive with the locally-built new-generation “Baby Benz” in the second quarter of 2021.

With its “cab-backwards design”, the new C-Class continues the legacy of the previous C-Class generation, with its short front overhang, long wheelbase, and rear overhang, which creates a sense of motion even when the car is standing still. As part of this design philosophy, the windscreen and passenger cell have also been moved to the rear.

When viewed from the front, you immediately notice the power dome and characteristic grille that now features the central Mercedes star on all models. The optional external star falls away entirely.

As before, the radiator grille’s design and character will differ in its details to signal different models in the range. The base model, for example, has a central star and louvres, while the AVANTGARDE line gets additional decorative elements in the louvres and chrome surrounds on the radiator grille and front apron. The distinguishing feature of the AMG Line is the diamond grille with the star design in chrome.

The innovation continues at the rear, as the tail lights dazzle with an unmistakable day and night appearance. In the Saloon, the only body style to come to South Africa, the lamps have a two-piece design in the C-Class (a first in the smaller Benz range), with the light functions divided between the sidewall and boot lid lamps. Optional or line-specific trim in the rear bumper rounds off the rearview. Mercedes-Benz also introduces three new paint finishes in the C-Class range – spectral blue, high-tech silver, and opalite white.

Inside the cabin, the dashboard is horizontally divided into an upper and a lower section and vertically into a wing-like section with new, flattened round vents that remind one of aircraft engine nacelles. Also prominent is an increasingly driver-focused dashboard and central display tilted towards the driver by six degrees.

The new high-resolution LCD screen dominates the driver’s dashboard view, which buyers will be able to specify as either a 10.25″ or a 12.3” version.

Perhaps inspired by other brands such as Tesla and Volvo, the standard 9.5″ centre display is now portrait-oriented, although it will also be possible to optionally select an 11.9” display.

Compared to the previous C-Class, the latest generation of Merc’s Driving Assistance Package has additional and even more advanced functions. Mercedes-Benz says that, when danger threatens, the assistance systems can respond as the situation demands. All assistance systems will be visualised on the driver display using a new display concept. New driver assistance technology includes:

Thanks to improved surround sensors, the parking systems give the driver even better support when manoeuvring at low speed. The new C-Class’ optional rear-axle steering is integrated into the parking assistants, with the calculation of your parking trajectory adapted accordingly. The emergency braking function has also been improved.

Responsible for pioneering such developments as the passenger safety cell, for example, Mercedes-Benz has been at the forefront of safety technology for many decades.

The new C-Class showcases multiple new safety technologies like a centre airbag that inflates between the driver and front passenger seat during severe impact, reducing passengers’ risk of bumping their heads.

With the familiar PRE-SAFE® protection for frontal and rear collisions, PRE-SAFE® Impulse Side (available with the Driving Assistance Package Plus) forms a kind of virtual crumple zone around the car. When fitted, PRE-SAFE® Impulse Side can move the driver or front passenger away from the impact by inflating air chambers in the side bolsters of the front seat backrest.

Like the new S-Class, the new C-Class is equipped with the second generation of MBUX (Mercedes-Benz User Experience). The vehicle interior has become more digitised and intelligent. The car’s high-definition screens can be individualised with three display styles (Discreet, Sporty, Classic) and three modes (Navigation, Assistance, Service). Full-screen navigation was adopted from the S-Class and promises to give the driver the best possible guidance while driving.

Available as optional equipment, a camera scans the surroundings in front of the new C-Class and shows moving images on the central display. Virtual objects, information, and markers are superimposed on the video image – these include traffic signs, directional arrows, lane-change recommendations and house numbers – making navigation a lot easier, especially in urban areas. To add even more vivid reality, you can also order the system with an optional colour head-up display.

Made famous on Tesla cars, over-the-air updates allow for new features to be downloaded and installed via the cars embedded SIM card. Effectively, features that haven’t been invented yet can be installed in cars that have already been sold.

New high-performance headlamps are standard on the C-Class, with the new Digital Light system – first launched on the new S-Class – available as an option. This revolutionary tech allows new functions, such as the projection of guidelines or warning symbols onto the road ahead. This is particularly useful where there are roadworks or poor visibility conditions. The system also identifies pedestrians with a spotlight feature and projects clarifying arrows to where the pedestrian is located. It will even warn you before running a red light or stop sign by projecting a symbol onto the road surface ahead of you.

Thanks to systematic electrification and intelligent downsizing, the new C-Class sets new standards of efficiency. The engine range has only four-cylinder units from the current modular FAME (Family of Modular Engines) Mercedes-Benz engine family.

In addition to turbocharging, the full range of diesel and petrol engines available on the new C-Class now have an integrated starter-generator for intelligent assistance at low engine speeds. This helps to improve power delivery while making significant fuel savings possible. Engines will also start rapidly and smoothly, ridding the cabin of intrusive noises as the start/stop function is engaged.

By the time you are likely to read this, preparations for building the new C-Class at the Mercedes-Benz plant in East London will be well on their way. In what is, effectively, a massive boon for the local economy, Mercedes-Benz South Africa will not only produce the C-Class for local sales but also for multiple international markets. It seems that one of the most beloved Mercs in history is destined to continue its legacy as a proud member of the local motoring scene.