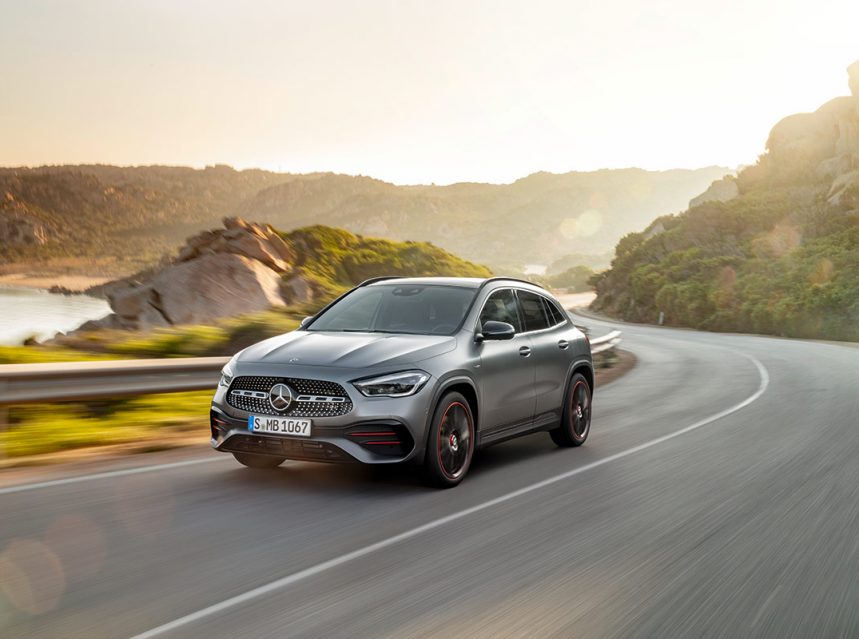 The new GLA finally arrived in the Driven driveway, and as is expected of any new model, it brings with it a variety of welcome changes.

The first generation GLA was something of a trial project, with Mercedes-Benz testing the waters in the niche crossover market. In 2014, when the GLA first broke cover, Benz played it safe with an offering that was more hatchback than SUV. Regardless, buyers across the globe bought into the jacked-up hatchback proposition, and now the wholly revised formula is a significantly more polished product.

We recently had the opportunity to test the GLA 200 AMG Line and GLA 200d AMG Line back-to-back, and while the derivatives are closely matched in specification, the almost polar opposite engines make for decidedly different driving experiences.

MATURED INSIDE AND OUT

Where the original GLA was a little light on the utility side of the SUV equation, Mercedes-Benz has infused the latest GLA with significantly more SUV DNA, especially where exterior looks are concerned. The GLA’s styling identity is now significantly more evolved from the A class on which it is based. The result is a decidedly handsome crossover straddling the line between traditional SUV and SUV Coupé styling format.

The interior of the new GLA is picked up directly from the A Class though with slight tweaks to head and legroom, commensurate with the slightly larger dimensions. The cabin is also replete with the modern tech and amenities you enjoy in the latest Mercedes vehicles including the new MBUX system. Easy to use and easy to live with, MBUX is augmented by Apple CarPlay and Android Auto. Given that we had both AMG Line derivatives on test, the level of standard tech is sufficient, and includes items such as Xenon lights, daytime running lights, cruise control, remote central locking, Bluetooth, touch multifunction steering wheel, rain sensing wipers, and keyless start.

On the safety front, both GLA’s feature well, offering seven airbags as standard and up to nine as an optional extra. There is ABS, EBD, traction and stability control, lane change warning, and both test units had a head-up display fitted, helping the driver to keep their eyes firmly fixed on the road, rather than on the instrument cluster.

The new GLA can be had in one of two engine options. There is the GLA 200d which is powered by a 2.0-litre turbo diesel engine which produces 110 kW and 320 Nm, and is mated to an eight-speed automatic transmission. Mercedes claims it is agreeable to an 8.6-seconds zero to 100 km/h sprint, delivering a top speed of 208 km/h. This engine is also extremely frugal with a claimed consumption of 5.9 l/100 km.

On the other hand, the GLA 200 is powered by a 1.3-litre four-cylinder petrol engine that churns out 120 kW and 250 Nm of torque, and sends all the power to the front wheels via a seven-speed dual-clutch transmission. Mercedes claims a fuel consumption of 6 l/100 km with this one.

Given the almost negligible differences between our two test units in terms of specification, it was up to the driving experience to set the two cars apart.

First under the microscope, the GLA 200. The combination of 1.3-litre engine and seven-speed dual clutch automatic was not our favourite. While power and torque delivery are sufficient in this application, the 1.3-litre mill often seemed to be working too hard to make the magic happen. Gearing ratios also seemed to lack the pace necessary to extract the available performance from the small capacity engine.

The GLA 200d, on the other hand, offers a smoother acceleration profile thanks to its significantly larger displacement and wide maximum torque band. Also, the more robust eight-speed auto mating seems better suited to the powerplant, shifting with much less effort than the seven-speed box in the petrol version.

Despite having less torque than its turbodiesel sibling, the GLA 200 does feel slightly nimbler in everyday driving. This can be attributed to the fact that the petrol version weighs a full 124 kg less than the 200d, which significantly improves its power to weight ratio and driving feel.

Competition in the luxury compact crossover segment is fierce, with rivals such as the Volvo XC40, BMW’s X1, and even Audi’s Q2 standing in line to challenge the GLA. Despite a power deficit to some of its rivals, and the fact that the most desirable tech goodies are optional, the GLA is a mature offering that serves up true Merc style in a good looking, fun-to-drive package. For our money, the GLA 200d AMG Line probably pips the GLA 200 at the post based simply on the engine/gearbox combination. We would, however, not have the optional 20” alloy rims that are available for these cars. Our ever-deteriorating roads have no mercy, while the GLA’s already stiff suspension can do with the suppleness of a lower profile tyre.