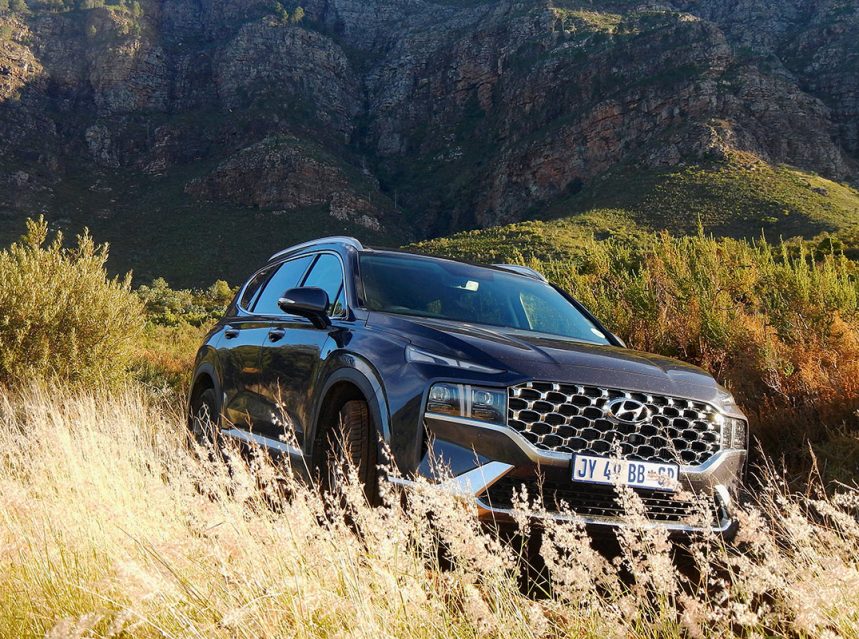 The Hyundai Santa Fe was introduced for the 2001 model year as the company’s first SUV. Since then, it has contributed substantially to Hyundai’s success worldwide. To celebrate 20 years of the popular nameplate, Jim Freeman took the latest, facelifted Executive version to visit 20 interesting towns in the Western Cape Province.

When Hyundai introduced the Santa Fe to the US market 20 years ago, it was met with such enthusiasm the South Korean company had trouble supplying the demand. The mid-sized SUV helped establish the brand in the US as well as worldwide (also in South Africa), and the facelifted version of the fourth-generation Santa Fe, first introduced in 2018, was recently launched locally.

Claimed to be based on Hyundai’s new Gen 3 platform, the facelifted model is easily distinguishable from its predecessor by a prominent, wide “cascading” front grille merged with T-shaped LED Daytime Running Lights, a LED strip running across the width of the vehicle at the rear and wider wheel arches. It is also slightly bigger, with more legroom for second-row passengers and increased cargo space (634 litres with the third-row seats folded flat).

Inside, the seven-seater now has a redesigned “floating” centre console with a larger push-button gear selector, a new drive mode selector (with Terrain Driving Mode in the Elite model), a 10.25” touchscreen for the infotainment centre and a 12.3” Super Vision digital instrument cluster. Full leather seats are standard, as well as auto climate control and a rear-view monitor.

In Spanish, Santa Fe means “holy faith”, and Hyundai South Africa has kept faith in the venerable 2.2-litre turbodiesel engine as the sole propulsion option for the latest Executive and Elite models (the Premium derivative has been dropped). While still badged D2.2 CRDi, it is, in fact, a new power plant with a lighter aluminium block, a displacement of 2,151 cc (versus the older R II’s 2,199 cc), a higher compression ratio (16.0:1) and fuel pressure of 2,200 bar (vs 2,000 bar for the older engine).

I last drove a Santa Fe two years ago, taking it to Eland’s Bay on the Cape West Coast and returned with the verdict: Good looks, drive quality, performance, road-holding, build, luxury and space (a true seven-seater). Therefore, it was a no-brainer to retrace my route with the 2021 model to see how they compared. However, to celebrate 20 successful Santa Fe years, the idea was expanded to include 20 towns.

So, nestled in a dark grey Elite model (with a panoramic sunroof, rear window curtains, heated and ventilated front seats and a smart power tailgate), I set off from my home base, Stellenbosch. I decided to do two circular mini road trips, one taking in the Overberg and the second the Swartland and parts of the West Coast.

The Smartstream engine, now with an electric thermostat, new E-VGT turbo, intercooler bypass valve, ceramic glow plug, and a timing belt, delivers a healthy 148 kW and 440 Nm of twisting force, and heading over Helshoogte, it impressed from the outset with its discreet, yet forceful delivery of torque.

At spectacular Boschendal, near Pniel, I spent time gently nudging the Santa Fe down a MTB track and reversing it back out to the road again. Luckily the Elite is AWD and employs the HTRAC system with Snow, Mud and Sand settings; and thank you too for Hill Assist Control and rear-view parking cameras.

Next up was Franschhoek, the proverbial jewel of the Western Cape, followed by a quick visit to the Oude Molen distillery in Grabouw to see what’s new in their brandy range. After passing through Elgin, I stopped at Peregrine Farmstall for a piece of cake.

On route towards Caledon past Houwhoek, the new 8-speed DCT (replacing the 8-speed auto in its predecessor) ensured smooth changes, albeit measured and relatively slow. The enhanced chassis rigidity abetted road stability and balance, but the low-profile 20″ rubber compromised the ride comfort somewhat (although it is still far superior to its ladder-frame based competitors).

From Caledon, I found my way to Napier, one of the hidden gems of the Overberg with lots of little coffee shops and bistros to check out. Next up was Stanford, Hermanus, Onrus, and Hawston, followed by Kleinmond, Betty’s Bay and Pringle Bay, before joining the spectacular Clarence Drive from Rooi Els to Gordons Bay.

It is one of the finest and most beautiful roads to drive in this country, and on the twisty tarmac, the Santa Fe’s road manners were impeccable, given that it started to rain and was getting dark. From Strand I headed for Stellenbosch on the R44 through Somerset West and then on to Malmesbury, Riebeek Kasteel and Riebeek West.

Riebeek Kasteel is a gorgeous spot akin to Greyton and Stanford, and I checked in for the night at the gorgeously appointed Ruby Rose Country House. I enjoyed a hot bath after having spent most of the day in the driving seat. Interestingly, parked next to a Fortuner, there was little to choose between the Toyota and the Santa Fe in terms of physical dimensions.

The following day, I headed for Darling, Moorreesburg and Hopefield and then up the West Coast to Velddrif and Stompneus. I am an absolute sucker for good Portuguese food, and one look at the menu at Alegria Restaurant in St Helena Bay had me vowing to return.

I made a bit of a detour from my planned route to visit Lambert’s Bay and Eland Bay purely to partly retrace my 2019 Santa Fe tracks… and to see whether the exquisite cat mural at the Mad Hatter Café in Lambert’s Bay is still there (it is). From there, I drove to Britannia Bay and then to Paternoster on a delightful dirt road running through a nature reserve.

The sand was quite deep in places – allowing me to test the Santa Fe’s AWD system – but I think it would have waxed it even if rain and previous road users had not compacted the surface. The last stop on my 900 km bumble was Yzerfontein before returning home to Stellies.

For R869,500 (including a seven-year/200,000 km warranty and six-year/90,000 km service plan), the Elite is well-specced and competitively priced – and judging by my impressions on this trip, the seven-seat Hyundai is a sensible buy within this extended SUV segment.

In hindsight, it is clear the Hyundai executives had perfect 20/20 vision back in 2001 when they decided to introduce the Santa Fe for the first time.