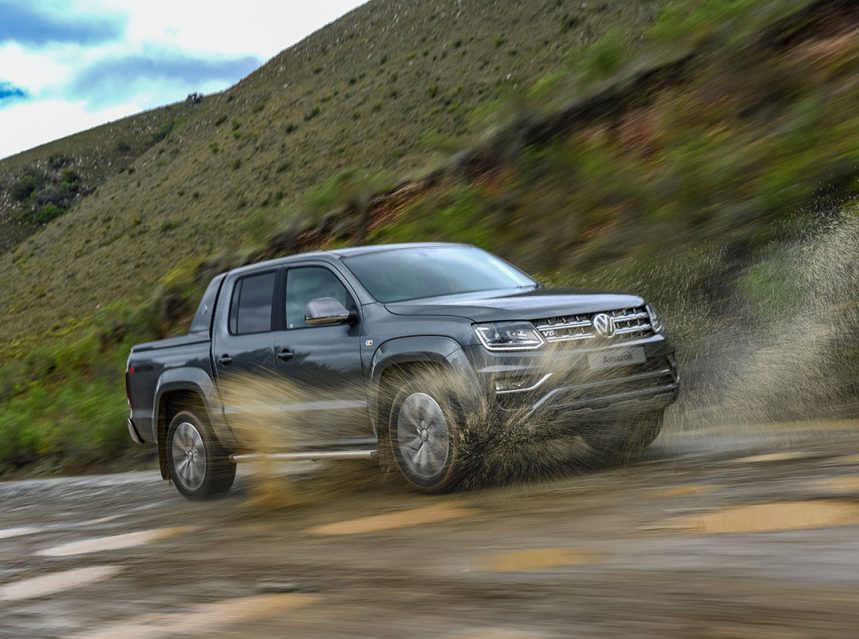 “Power!” The word itself is synonymous with former Top Gear UK host Jeremy Clarkson. While most of his thirst for power antics was often the product of the combination of a script and his on-screen persona, he personified the closeted power maniac within us all. Mention big numbers, and all car enthusiasts go weak at the knees.

The pursuit of power is the reason why the horsepower wars have been going on for so long, although never quite so in the bakkie segment, at least not locally. Bakkies have primarily managed to operate under the radar, as it were, as far as sheer power is concerned… until now. When Volkswagen recently launched the new V6 Amarok with 190 kW on tap, the media could not resist exclaiming: “Behold, the most powerful bakkie in Mzansi!”

As far as sheer grunt is concerned, the V6 Amarok has firmly established itself as the dominant powerhousecompared to its rivals. The newer Hilux offers more modern styling. The Ranger excels as an off-road machine. Even the surprise late entrant of the year, the GWM P-Series, looks set to claim its place as one of the most technologically advanced trucks in the country. But once we get to power output and delivery, the VW is the undisputed champ by a good margin.

Looks That Have Aged With Grace

The Amarok has been around for some time now, and truth be told, it is beginning to show its age. The familiar shape of the bakkie has remained essentially unchanged since its launch in 2010. However, modern LED lights and chrome details on the grille have helped keep it appealing to its loyal fan base.

Key to the 190 kW V6 that Driven had on test is the optional 19” alloys that also help the Amarok by giving it an upscale look. A lone V6 badge inserted in the grille is the only indication to people in the know that this Amarok means business. Overall, the Amarok is a handsome vehicle, which is likely why VW has managed to keep the bakkie’s design relatively fresh.

The Amarok has always offered a lovely place in which to spend time. It has been the most ‘car like’ in execution in the bakkie segment for years. While the cabin design has not quite kept pace with other Volkswagen offerings, it still offers competitive comfort and refinement. The Amarok comes with a host of features as standard, including dual-zone climate control, electrically adjustable and heated front seats, leather upholstery, reverse-view camera and a touchscreen infotainment system with both Android Auto and Apple CarPlay.

In terms of practicality, the Amarok offers ample space for front passengers. The situation, however, can get cramped in the rear when transporting five adults, given the tight legroom. Regardless, the ownership experience should face no rage-inducing practicality compromises.

All the Driving Feels

The piece de resistance of the 190 kW Amarok is its performance credentials. Every time I turned the key and 3.0-litre V6 TDI roared into life, this was the dominant thought in my mind. The engine has been retuned to produce 190 kW (up from 165 kW) and 580 Nm of torque (up from 550 Nm). Was this power increase necessary? No. The Amarok already delivered class-leading performance. But are we complaining? No. One can never have too much power. This is especially true if, as is the case here, it is all channelled through an eight-speed ZF automatic to the 4Motion permanent all-wheel drive.

It comes as no surprise that the Amarok is now also a highway monster. Plenty of jaws will drop when you sprint to 100 km/h in a claimed 7.6 seconds and onwards to a 200 km/h-plus top speed. These are wild numbers that will most likely never be explored by the typical bakkie buyer, but it sure is a great feeling knowing they can be achieved. The Amarok also accesses its maximum torque from 1,400 r/min to 3,000 r/min, meaning that low down power is more than generous. When the accelerator pedal is floored, the turbo can squeeze out up to 200 kW of additional power for up to 10 seconds, giving you more than ample overtaking power on the highway.

When not driving the Amarok at ten-tenths, you will find the ride quality also highly agreeable. Where it used to be class-leading, the competition is slowly starting to catch up, but the Amarok still drives with a composed refinement that gives some SUVs a run for their money. That swift ZF gearbox also shines in this application, smoothly engaging the right gear when required. After all, there is a reason why the ZF has been the gearbox of choice for most performance vehicles. It is a mechanical masterpiece. The Amarok returns decent fuel economy, too, for a vehicle with such a potent engine. I was able to average about 9.5 l/100 km.

The Amarok 190kW is easily the most fun bakkie I have driven to date. Although I am aware that the typical buyer is not enticed by speed and horsepower figures alone, it cannot be ignored that there is a new kind of customer in town. Not everyone buying a bakkie is buying into the practicality the vehicle offers. There are lifestyle buyers who buy into the bakkie form factor primarily for the looks and the lifestyle image they provide. And it is this buyer who I feel will appreciate the bragging rights and thrills that come with owning a fast one. The Amarok was already a solid vehicle to begin with, and the recent power upgrade has made it that much more enticing. However, it pains me to realise that the 190 kW Amarok V6 is well out of my grasp with a starting price of R921,900. With great power, almost inevitably, comes a hefty price tag.