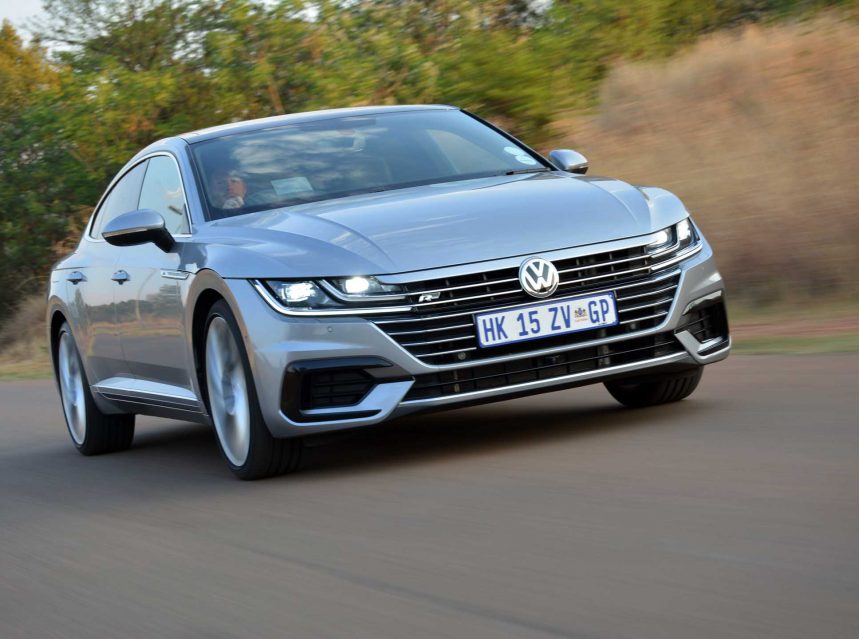 The 1970s were a watershed era for the Volkswagen brand as it, too, tried its hand at the medium-sized sedan market when it launched the then Passat saloon. It was, at the time, a model that was aimed squarely at the folks looking for a fairly sizeable sedan that would reside above the Jetta. LERATO MATEBESE drove its newest progeny, the Arteon, to see if it also resembles a seminal moment in VW’s history.

It is safe to say that the Passat has evolved into something of a swan in this latest incarnation, since it’s a far cry from those uninspiring first iterations with its ethos of boxy. In order to expand the model’s footprint, though, the German marque has, since the previous generation, launched a swoopy, four-door coupe variant dubbed the CC (Comfort Coupe) and yes, we agree, not the most aspirant name in the automotive fold.

What the CC did for the Volkswagen brand was to attract a still mature, yet more exuberant buyer looking for all the quality attributes that come with the brand’s products but with a quotient of flair that would elevate them into a much cooler buyer profile. 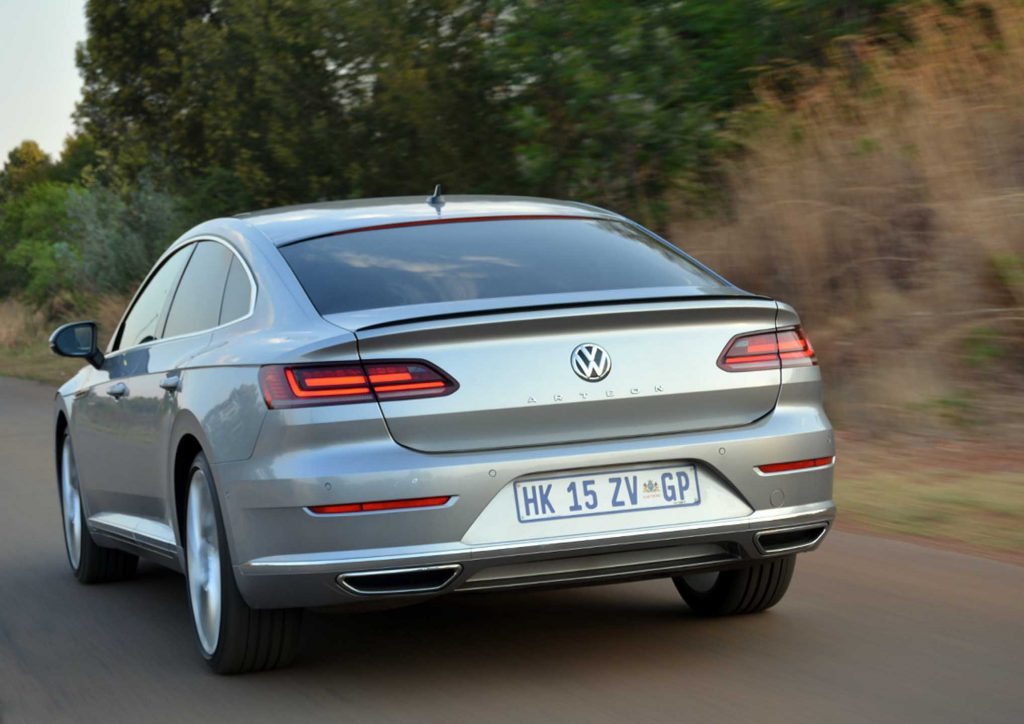 Now the Wolfsburg-based carmaker looks set to not only continue along that trajectory but also add another layer of desirability that in this instance culminates in the Arteon four-door coupe. To a large extent, it’s based on the Passat, but the Arteon is the marque’s rendition and re-imagination of the four-door coupe, which not only takes the fight to its premium stablemate Audi A5 Sportback, and by that token also takes aim at the BMW 4 Series Gran Coupe.

With a length spanning almost 5 metres and a sizeable wheelbase of 2,841 mm, the Arteon has an air of presence that jettisons it into a much higher perceived segment. Boasting the company’s latest visage, with those chrome horizontal slats that spill into the headlights, adds a wide stance to the model’s profile.

The side profile, meanwhile, is mostly characterised by the main beltline sweeping across the entire length, while the rear with its slim, LED-equipped lights finishes off a pleasing design. Those 20” wheels do well to fill those large wheel arches, while there is an air of grace surrounding the vehicle suggesting it costs a trite more than it actually does.

Yes, the pricing could be considered somewhat exorbitant on the face of it, considering what the model brings to the proverbial table, but there is a method to the madness and we’ll get to it shortly. 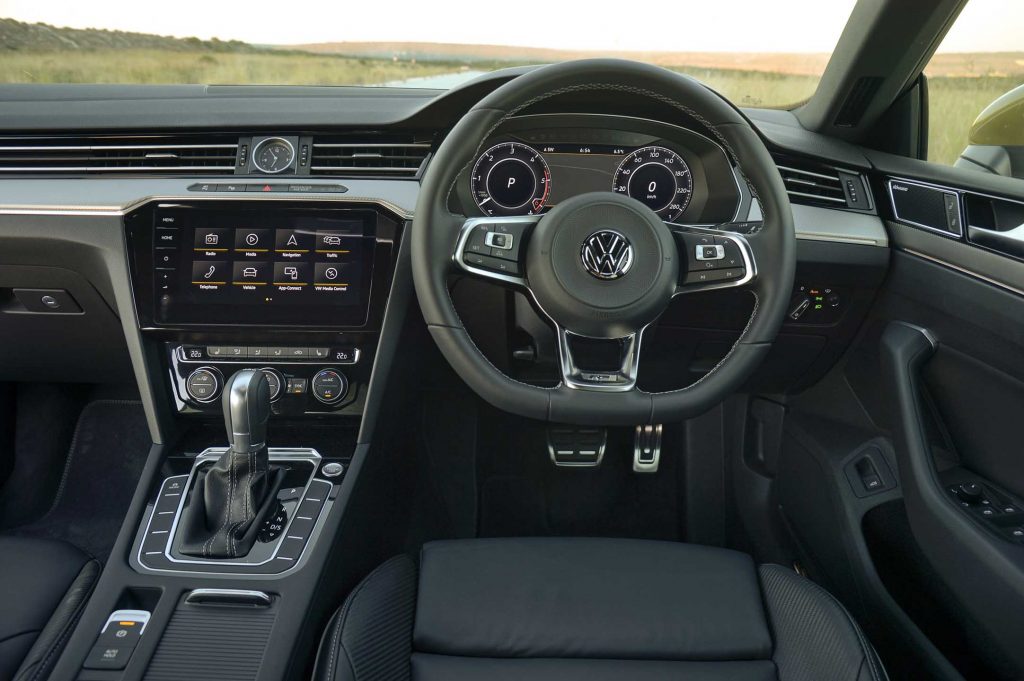 Swing open the driver’s frameless door and you’re greeted by a cabin that, for the most part, is quite similar to that of the Golf. This translates to an upmarket, solidly hewn cabin architecture that many a Golf 7.5 owner would relate to. And there, perhaps, lies the rub where some quarters are of the view that there needs to be a design departure in the cabin layout and materials from any Volkswagen product that went before the Arteon.

However, I digress, because, under that swoopy taut design lies similar underpinnings that also underscore the ubiquitous Golf, but I reckon the Arteon’s cabin is still classy enough to be considered premium. 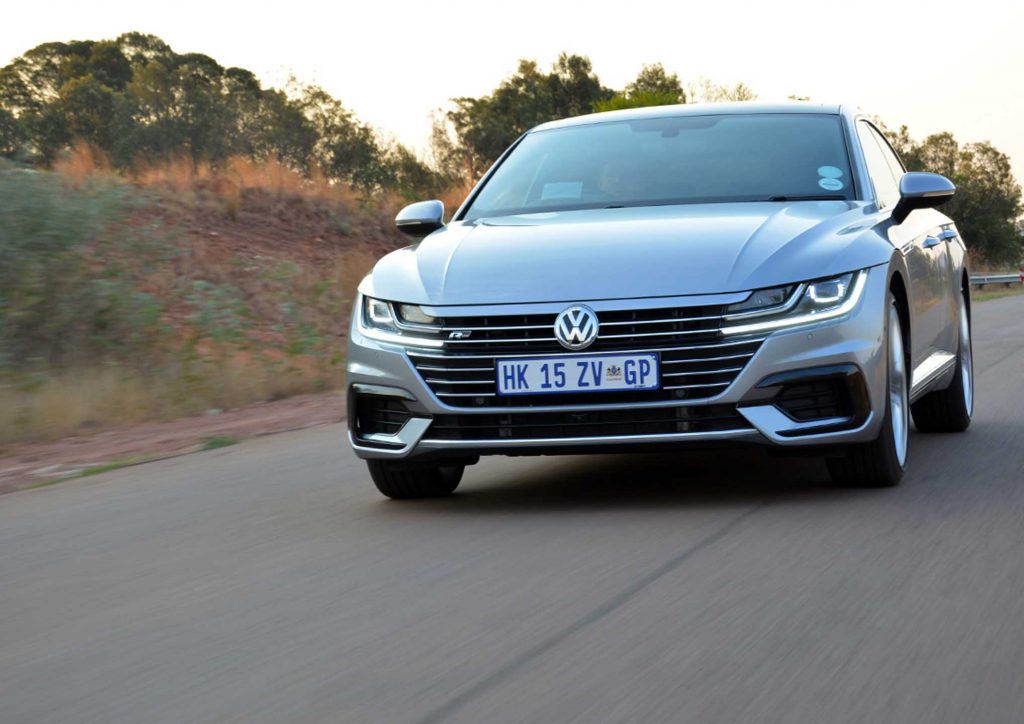 On test here is the 2.0-litre TDI variant decked out with the R-Line Package (R649,900) that includes those aforementioned 20” alloy wheels and R-Line embossed front leather seats and steering wheel. Power is rated at 130 kW while twisting force weighs in at 350 Nm and is transferred to the front wheels via a six-speed DSG transmission.

And while the engine has been tried and tested in the entire VAG (Volkswagen AG) group of cars over the years, I’m of the view that the engine is somewhat long in the tooth, losing some lustre compared to its equivalent rivals. The thing is, while the engine delivers on the performance and economy fronts, it is in the refinement stakes where it is left rather wanting.

At idle, the diesel clatter seems at odds with a vehicle that is, for the most part, playing in a premium segment.

That said, the Arteon is an amiable vehicle to live with, thanks largely to its spacious nature and its avant-garde styling, which means that your travels will be anything but incognito as it manages to attract its fair share of admiring glances.

Then there is the drive polish on offer which, for a vehicle shod with ultra low profile tyres, is in fact rather exemplary with nary any of that dreaded crashing filtering into the cabin. Fuel economy is yet another feather in the model’s cap and we managed as low as 5.1-litres per 100km, which theoretically means that you can eke out approximately 1,000 km from the 55-litre tank, making the Arteon a consummate, long-distance cruiser.

So, then, in isolation, the Arteon seems to tick all the right boxes as a package, save for the lack of the diesel engine’s refinement. Of course, you could easily opt for the 2.0-litre turbo petrol, but that also comes with the disadvantage of slightly higher fuel consumption.

There is the fact that the South African market would rather opt for an equivalent Audi A5 Sportback or the BMW 4 Series Gran Coupe, and there is merit in that decision as these are likely to have better residual values in the pre-owned market. From where I stand, it is a great pity, because the Wolfsburg offering is an enchanting vehicle in its own right.