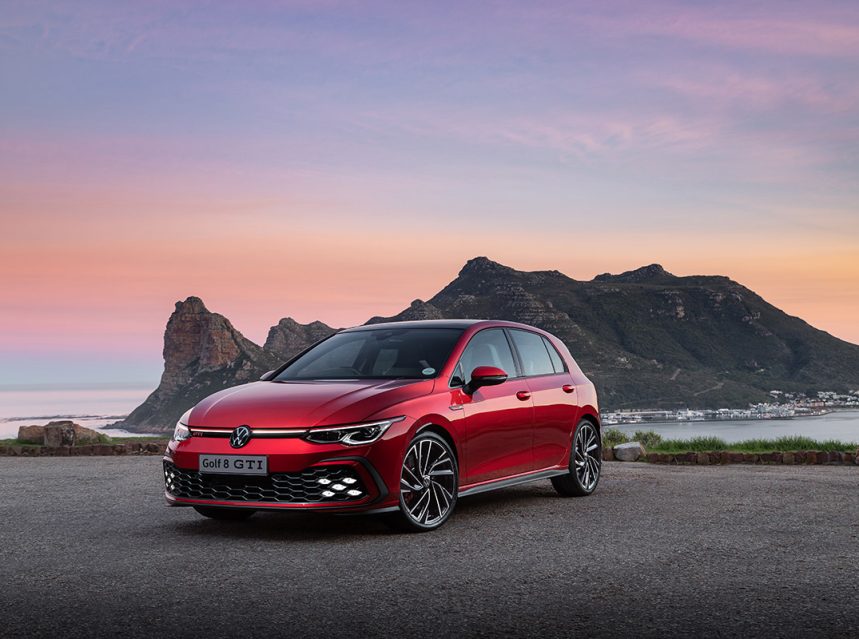 Since the first generation was unleashed here nearly forty years ago, the Golf GTI has been a firm favourite with local buyers. This has made South Africa one of the biggest Golf GTI markets outside of Europe, and the introduction of Gen 8 was highly anticipated… more so as the normal Golf range has been discontinued locally.

The previous Golf GTI sold over 14,000 units since July 2013, with 34% of the total seventh generation of Golf sales being a GTI. Sharing its revised MQB platform with the fourth-generation Audi A3 and Seat León, the latest, most digitally advanced version of the quintessential hot hatch is evolutionary (again) – in keeping with its formula for success.

At the rear, new L-shaped taillights (similar to the T-Roc’s), the roof spoiler, diffuser and two round tailpipes located at the outer sides, distinguishes the new GTI from its predecessor. Now available only in five-door form (it was also the only derivative made available locally since the inception of the GTI) the Mk8 is 29 mm longer and 10 mm narrower than the Mk7 but has the same wheelbase and a suspension lowered by 15 mm compared to the standard Golf 8.

Despite the popularity of the Golf GTI, Volkswagen South Africa has been hugely conservative in its choice (or lack thereof) of local variants. While available overseas with a manual transmission, traditional plaid upholstery and 17-inch wheels, the only derivative made available here comes with DSG transmission, Vienna leather seats and 18-inch Richmond alloy wheels.

Overseas, a Clubsport version packing 221 kW and 400 Nm are available (and a Clubsport 45 – to celebrate 45 years of the Golf GTI – has been announced) but as things stands now, it is not destined for South Africa. The new Golf R, though, could reach our shores quite soon…

We had an opportunity to sample the new GTI in the Westerns Cape shortly before it was due to hit the showrooms this month, and besides its updated, yet familiar, exterior styling, the first thing that stood out as you entered the cabin was the completely digitalised instrumentation and virtually buttonless centre console.

The InnoVision cockpit and infotainment system, as also found in the new Audi A3, replaces the traditional analogue panel with an entirely digital 10.25-inch driver’s display and a10-inch centre touchscreen for multimedia. A touch-sensitive panel controls various functions, including the headlights and air-con, and it starts up as soon as you open the door.

Press the new start/stop button in the centre console (it pulses red until the engine is started) and the 2.0-litre turbo mill bursts into life with its familiar burbling sound. The new multi-function leather sports steering wheel now has touch controls, and the small gear lever – a result of adopting a shift-by-wire system for the GTI – is a far cry from the golf-ball knob in the first GTI…

With the lever you can only select Drive, Neutral or Reverse (there is a separate push button for Park) and the only option of manual control over the fully automated system is to use the paddles behind the steering wheel. It took some time to get used to the new layout and system, as the sound volume and temperature can be changed by swiping action. But it is quite user-friendly; once you get the hang of it…

In terms of agility and sportiness on the road the newcomer is unmistakably a GTI – from the way it sounds and reacts to the slightest inputs to the manner how all the components combine to provide a dynamic experience second to none. Thanks to the accurate Vehicle Dynamics Manager that coordinates the electromechanical running gear functions, it feels as sharp as a Mk7 Clubsport on turn-in and just as balanced through the corners.

Also contributing to its precise handling is Dynamic Chassis Control (DCC) with variable shock absorbers making it possible to select your own preferred setup from the standard driving profile selection (with Eco, Normal, Sport and Individual modes). In its latest form, the GTI has again set the benchmark in its class… and it is the best GTI to date.

However, with the ID range in production and the Polo GTI slowly taking over the hot hatch mantle from the Golf, it may also be the last of its kind. Yes, we may see an 8.5 upgrade and perhaps a special 50th anniversary edition but even these special models will essentially share this model’s underpinnings.